The two began wrestling together before they could barely write their own names. McGhan always would have the upper hand on the mat over his younger friend.

“He was way better than me when we were little,” Greer said, “but him beating up on me made me better.”

As the years passed, they continued to grapple on a daily basis. Greer quickly improved. The matches became more even.

“It got to the point where we were wrestling nose-to-nose,” Greer said. “We made each other better.”

Greer and McGhan became high school teammates for the first time last season, and both made their marks on the biggest stage at The Palace of Auburn Hills.

Greer became the first freshman in school history to win an MHSAA Individual Final when he defeated Corunna’s Emilio Campos 9-6 in the Division 3 championship match at 103 pounds.

Meanwhile, McGhan, a junior last season, lost in the semifinals at 112 pounds before recovering to take third place.

“It felt really good to be the first freshmen in school history to do that,” said Greer, who started wrestling when he was 4 and was inspired by his talented older twin cousins, former Carson City-Crystal standouts Darren and Dillen Decker.

“I always had big goals, and at the beginning I knew I had a little bit of a chance. But it wasn’t till later on when I realized I could do it.”

Greer finished the season with a 42-1 record, although he never really lost a match.

Midway through the season, Greer had appendix surgery and was forced to miss a few matches. During one dual meet, his coaches put him in the lineup thinking the other team would void at that weight.

Instead, the opposing coach opted to place a wrestler in the match. Greer lost on an injury default since he was unable to wrestle.

Tri-County wrestling coach Corey Renner, in his 10th season, said he wasn’t surprised by Greer’s rare feat. He had been standing by patiently for the time when Greer could showcase his abilities at the high school level.

“I’ve known him since fifth or sixth grade, and we’ve just been waiting for him to get to high school,” Renner said. “He beat a kid from Shelby early in the year, who at the time was the favorite to win it. He beat him pretty handily, and at that point I knew he could probably win it. 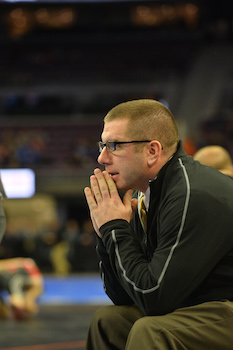 “You never know, though. Kids can get hurt or sick, and strange things can happen, but I felt like if everything went the way it should then he could win it. He’s dedicated, and he just does everything you ask and more.”

Greer and McGhan have returned for one more season together and are currently leading the 9th-ranked team in Division 3.

The Vikings entered this week’s Grandville Invitational with a perfect 9-0 mark, which included a win at Tri-County’s team invitational.

They also placed third at the Chippewa Hills individual tourney.

Greer has picked up where he left off. He currently owns an unblemished 11-0 record while moving up to 119 pounds.

“I still have a lot of goals I want to reach,” Greer said.

Tri-County hasn’t reached the MHSAA Team Quarterfinals since 2003, but this year’s team has the potential to break the dry spell with the return of several starters.

“This is the best team we’ve had in a long time,” Renner said. “We still have some holes to fill, but when we get everyone healthy and ready to go then we will be really tough.

“Whitehall is in our Regional, and they’re really good every year, but I think we can compete with them if we can get everybody where they need to be. We can give them a run for their money, that’s for sure.”

Greer also likes this year’s group, and has high hopes for the rest of the season.

“We lost a couple good kids, but we still have a lot of good juniors and seniors and a couple freshmen and sophomores who are doing really good,” Greer said. “We have good kids all the way through so we should be strong for a while.”