As the Hancock hockey team bus rolled into town to end last month’s Division 3 championship run, coach Dan Rouleau warned his players that the celebration was just getting started.

“I told these kids on the bus coming home, they were going to be rock stars over the next month,” he recalled Thursday. “And they certainly are.”

That’ll happen when a hockey-crazed community earns its first MHSAA title since 1999, along the way beating 17-time champion Bloomfield Hills Cranbrook Kingswood 2-1 in overtime in the Semifinal and four-time finalist Grand Rapids Catholic Central 4-2 in the championship game.

And despite the Bulldogs’ No. 2 ranking heading into the postseason, the run was made all the more incredible considering Hancock, with 262 students, had the lowest enrollment of among hockey schools in Michigan this winter and was paced by two underclassmen leading scorers and a sophomore goaltender.

“I told the guys before the season started that we’ve got a chance to do something special. I really felt like we had the chance to do this,” said Rouleau, who was an assistant for the 1999 team that won the Class B-C-D title. “When we were looking at who was coming back for the other teams, when we got to the Quarterfinals we told (our team) there are seven teams that could beat you guys, and seven that you could beat. It was that close.”

The Bulldogs are the Applebee’s Team of the Month for March after finishing the run as the best of that final eight, but also with a school-record 24 wins to go with only six losses – four decided in overtime and the other two by only one goal apiece.

Seniors Jack Fenton and Dylan Paavola made the Division 3 all-state first and seconds teams, respectively, bringing a veteran presence to the group of blueliners. But behind them, all-state goalie Dawson Kero was only a sophomore. Sophomore right wing Teddy Rendell was the team’s leading scorer with 24 goals and 36 assists, making the all-state first team, and freshman left wing Alex Nordstrom made the second team with 33 goals and 26 assists. (They were centered by senior Danny Hill, who joined Fenton and Paavola as captains.)

But on-ice dominance was only part of what made Hancock’s run so memorable. Here’s some of the rest:

Hancock, just over the Portage Lake Bridge on the Upper Peninsula’s Keweenaw Peninsula, is one of Michigan’s northernmost towns – and located 540 miles from USA Hockey Arena in Plymouth, home of the MHSAA Finals. Hancock also is 100 miles from Marquette, where it faced Sault Ste. Marie in a Quarterfinal on March 9, two days before it would take on the Cranes in their Semifinal.

First-year athletic director Steve Aho knew if his team won Tuesday in Marquette, it wouldn’t return home but would keep going all the way to Plymouth – so he was charged with planning for a potential five days of hotels, transportation, meals and more. He also started on plans for a fan bus that would bring students to the championship game if Hancock won the Semifinal that Thursday.

Neither trip would come cheap, of course. But that’s where Hancock’s wide-reaching web of supporters stepped in.

Teams making the long trip downstate frequently fund-raise to offset costs, Aho said. In this case the Bulldogs decided to try a GoFundMe crowd-funding web page, asking for $6,000 to combine with what the MHSAA gives teams for travel.

Aho had the team’s seniors write their story before the Quarterfinal, so the request would be in their voice and from their perspective. He published it immediately after the Bulldogs beat Sault Ste. Marie – and by Wednesday, $3,000 had been raised with funds coming in from alumni spread all over the Midwest and beyond. Within two days, the $6,000 was raised, which when combined with funds from the MHSAA paid for the trip. 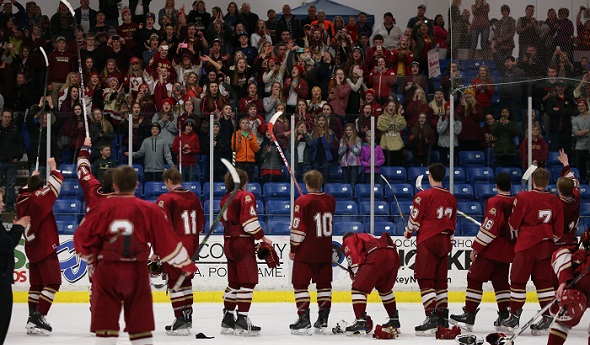 Rouleau said as the bus traveled south, his players watched the donations come in on their phones – and also the inspirational messages left by alums, including the Chicago Blackhawks’ Tanner Kero. “These guys knew they were involved in something special at that point,” Rouleau said.

Meanwhile, the school’s athletic boosters paid for most of a fan bus that was filled with 51 (for 53 seats) who made the trip to root on the Bulldogs – then got right back on the bus for the long trip home.

But what a trip back it was for the team. A Marquette County Sheriff’s deputy escorted the bus through that county, then passing the Bulldogs off to a Baraga County deputy. From Munising homeward (about 150 miles) the parade continued to grow until it swelled to roughly 40 rescue vehicles followed by fan vehicles for another mile (see the long line arriving in town on the video below).

It was a trip none of the players or coaches will forget. Rouleau had enjoyed the 1999 championship with his son and nephew on the team, but this run certainly rivals if not surpasses the first – not only is Rouleau now the head coach, but he also was diagnosed with Parkinson’s Disease six years ago and was hoping he’d have another opportunity to take a team downstate before his health would make him step down.

With the players Hancock should bring back next season, his team's next trip to Plymouth might come after a much shorter wait.