PLYMOUTH — The stage was big, the lights were bright, but no bigger or brighter for Hancock freshman Alex Nordstrom than for his older teammates.

Many of Hancock's players weren't born the last time the Bulldogs skated in an MHSAA championship hockey game back in 2000.

So, competing for the Division 3 title on Saturday was a foreign experience for all of the Bulldogs, from the oldest to the youngest.

In Hancock's biggest games, Nordstrom produced with the poise of a veteran. He had two goals and one assist in a 5-2 Quarterfinal victory over Sault Ste. Marie, scored the overtime winner in the Semifinal against Bloomfield Hills Cranbrook Kingswood, then had another two-goal, one-assist performance in the title game.

"I kind of just focused and told my brain it's another game," Nordstrom said. "Just go out there and do what I do; just play."

In 30 games, he tallied 33 goals and 26 assists to finish second in team scoring to sophomore linemate Teddy Rendell.

"He was a key part of this puzzle," Hancock coach Dan Rouleau said of Nordstrom. "The kid was our second-leading scorer this year. He had great chemistry with a sophomore on his line. The kids were our top two scorers this year. It bodes well for the future of this team."

So, maybe Hancock won't have to wait 17 years for its next MHSAA championship. Although the Bulldogs have had a strong program for decades, their only title came in 1999 when they beat Big Rapids, 7-3, in the Class B Final. They lost to Cranbrook in the 2000 title game.

The team's goaltender, Dawson Kero, is only a sophomore. Kero made 20 saves.

The Bulldogs (24-6) won the championship not only for their own school, but for the Upper Peninsula as a whole. U.P. teams had gone 0-5 in MHSAA Finals since Marquette (Division 1) and Calumet (Division 3) won titles in 2008.

"Usually when a team from the U.P. comes down, you have the whole Upper Peninsula-backing mentality up there," Rouleau said. "It's really cool. We're a little isolated up there, but we've got some good hockey players up there, I'll tell you that."

Even bitter rivals become supporters when U.P. pride is at stake downstate.

"There might be a couple kids or parents who do not, but I think we got about 95 percent who are backing us," Rouleau said.

It looked like Hancock would run the Cougars out of the rink after one period, as the Bulldogs jumped out to a 3-0 lead and had a 17-8 advantage in shots on goal.

A potential back-breaker came with 18.2 seconds left in the period when Danny Hill buried a two-on-one pass from Nordstrom for a shorthanded goal to make it 3-0.

"Obviously, in any hockey game you want to get out to the quick start," Rouleau said. "That was our game plan for here today. To get a three-goal lead was huge, because it turned out to be the difference." 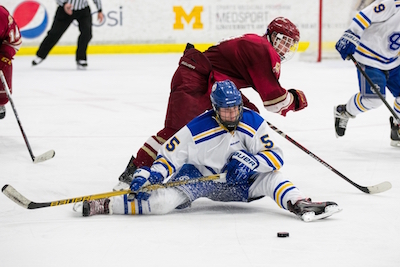 But the Cougars weren't at or near the top of the rankings all season because they're pushovers. They got on the board at 8:41 of the second period when a shot by Ethan Tellier made it under the crossbar. Catholic Central cut the lead to 3-2 on Chase Madden's power-play goal at 12:24 of the second.

Despite being outshot 30-16 through two periods, the Cougars were back in the game.

"Obviously, a disappointing start for us," Catholic Central coach Mike Slobodnik said. "We got overwhelmed. A lot of credit goes to them. They just really came out and pressed. We didn't have the start we wanted, being down 3-0. We came in between the first and second period and talked about how we've got to be better than that. We didn't change anything. We didn't feel it was a system thing. We had to work harder. We had to be better in certain areas of the ice. In the second period, we did that. We lost to a great hockey team, too, that's for sure."

The Cougars stayed in the game throughout the third period, thanks to some stellar netminding from junior Jacob McClelland.

With Hancock trying to get a two-goal cushion, McClelland made three saves in a row while playing without a stick with just under five minutes remaining. McClelland finished with 37 saves.

"He was great," Slobodnik said. "Jacob's a great goaltender. He's a great kid. He has over a four-point GPA. He's one of those guys on our team who understands the core values of what it means to be a Catholic Central hockey player."

Hancock's biggest scare came with 7:58 left in the game when Kero made a save and ended up on his back, not appearing to know the location of the puck. After the Cougars got a whack or two trying to get the puck loose, the whistle stopped play.

The Bulldogs could breathe a little easier after Nordstrom took a pass from Rendell and scored into an empty net with 57.4 seconds remaining. Even then, some of the Hancock players weren't taking anything for granted.

"Me and Jack (Fenton) and Danny (Hill) try to pound into the younger kids' heads that we have to keep going hard, not ever giving up," Hancock senior captain Dylan Paavola said. "That's when comebacks happen. We don't want any of that, because we haven't won a state championship. We didn't want to screw this one up, I guess you could say. I could say I felt comfortable with 3.6 seconds left."

Hancock players praised their fans, many of whom got on a bus in the middle of the night to make the nine-hour trek to Plymouth for the championship game.

A Go Fund Me page to help pay for Hancock's trip to Plymouth raised $6,620 from 99 donors in two days.

"It's awesome to see the support of the whole community," Fenton said. "Not just the school, but you see people from all over the country supporting us, alumni coming together and supporting us in our run to achieve this goal, the one goal everyone has to get this state championship."