PLYMOUTH — When Adam Pietila won a national championship with his travel hockey team last April, nobody in Hartland outside of his family knew about it.

When he won an MHSAA Division 2 championship with Hartland on Saturday at USA Hockey Arena, he did so in front of a large student section and with his best friends at the school.

“This is better,” said the Hartland sophomore, who scored the Eagles’ third goal in a 4-0 shutout of Trenton. “Going to school with everybody every day is just a great time.”

It’s the experience of playing for one’s school, in front of kids that players see every day in class, that coach Rick Gadwa pitches to talented players at Hartland who are on the fence about playing high school hockey.

The scene at USA Hockey Arena, with players jumping up against the glass to celebrate with the student section, could be Exhibit A in that sales pitch.

“You want to have a place where guys can come play where they’re feeling the love, where maybe sometimes they weren’t or it’s a different look or another stop for them,” said Gadwa, who played for Hartland 16 years ago. “More important, the pride of high school hockey, the pride of playing for your school, that stuff you don’t get in AAA or AA hockey. It’s a real special thing when you can come play for your school.”

Two of the newcomers to the Eagles in their quest to repeat were the Pietila brothers, Adam and Owen. Owen, a senior, scored two goals eight seconds apart to break a scoreless deadlock late in the first period after Hartland failed to cash in on a long five-on-three power play.

Owen Pietila made up his mind to play for Hartland after watching the Eagles beat Trenton in last year’s championship game. 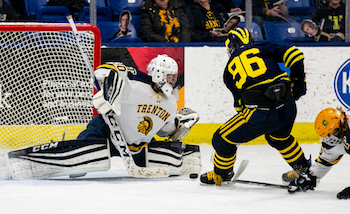 In the end, there was no doubt which team was the best in the division. Hartland (27-4) beat Brother Rice, 6-2, in the Semifinals before outshooting the Trojans, 44-13, in a dominant performance in the title game.

“We had a good plan here to start the playoffs,” Gadwa said. “We kept building and building and building. We got to the top at the end. The buy-in and effort as strong as it was is hard to beat, no matter how good you are. We played some good teams. Brother Rice and Trenton are unbelievable programs. Hat’s off to them on another great year.”

Trenton was hoping to avenge a 4-2 loss to the Eagles in last year’s championship game. The Trojans (25-5-1) came in with confidence, having shut out Hartland, 2-0, on Feb. 1. But Hartland was in command from start to finish, getting the first 11 shots of the game and 17 of the first 18.

“The first time we played them, we had a few bounces go our way,” Trenton coach Chad Clements said. “They had a few bounces go their way tonight. They outshot us two-to-one the last time we played them. I kind of expected that, just because of how offensive they were. I was fine with being outshot. As long as we kept the shots from the outside, we were fine with that.

“It’s their night again. We beat them this year, just not when it mattered.”

Adam Pietila’s goal at 13:47 of the second period came on the rebound of a Benny Tervo shot on a breakaway. Gabe Anderson completed the scoring with 4:33 left in the game.

Brett Tome made 13 saves to backstop the Eagles to the Division 2 championship for the second straight time. He had a 12-0 career record as a playoff starter, allowing only seven goals and posting seven shutouts.

“It means a lot to me to not lose a single game in the playoffs,” Tome said.

On the other end of the rink, Joey Cormier made 40 saves to keep the Trojans in the game most of the way.

“Joey’s just a tremendous competitor, the backbone of our team,” Clements said. “Without him, it could have been much worse. He gives us a chance to win every time that he plays.”