PLYMOUTH — The students in the large Romeo cheering section might have been nervous.

Some of his teammates might have been getting nervous too.

Nolan Kare, however, couldn't allow himself to give in to the natural human reaction as the MHSAA Division 2 hockey championship appeared to be slipping away from the Bulldogs' grasp.

After scoring three straight goals during a frantic 5:02 stretch of the second period, a seasoned Livonia Stevenson squad held a 4-2 lead over a Romeo team that had never played on the biggest stage in Michigan high school hockey.

Kare stopped the last 11 shots he faced over the final 22 minutes and 21 seconds, backstopping Romeo to a 6-4 come-from-behind victory over Stevenson on Saturday at USA Hockey Arena.

"I know we kind of let up a little bit, but our team has so much heart," Kare said. "I know that if I just make the saves I'm supposed to make and try to rob a few that our team is going to give us the best chance to win. I know if I'm doing that, then I'm going to give them the best opportunity to put us in a position to get back."

Senior star Logan Jenuwine's tip-in goal during a five-minute power play with 10:21 left in the game snapped a 4-4 tie. Steven Morris scored an empty-net goal with 29.1 seconds left to seal the first MHSAA hockey title in the 15-year history of the Romeo program.

Suddenly, a school that had no MHSAA team championships going into the 2014-15 school year has three over the past 16 months. It began with the volleyball team winning the 2014 Class A championship and continued when the football team upset Detroit Cass Tech in the 2015 Division 1 title game at Ford Field.

"Before the game, we were saying if the football team could beat Cass Tech with 20 Division I (college) players coming up, we could beat Livonia Stevenson," Romeo senior forward Nick Blankenburg said. "Shocking the world and being part of such a great team feels incredible. To win a state championship for our school, to get those rings like our football team and volleyball team, I'll remember this my entire life."

Like the football and volleyball teams, the hockey team benefitted from a huge outpouring of support in a matchup that was witnessed by two passionate and energized fan bases.

"There's just something special about Romeo," said Kare, who finished with 29 saves and led the state with all 27 of Romeo's victories. "It's a small-town feel. You could see it out there. The entire town's out there for us. Just like football, just like volleyball, we had the whole community behind our back. We're just unbelievably blessed to have the best fan base, the best family, the best support out of anybody."

The atmosphere in which the Romeo and Stevenson players competed is one of the things that sets high school hockey apart from its competitors. Senior forward Ben Kowalske, who played in three MHSAA Finals for the Spartans, said neighbors will stop him and congratulate him on how the team is performing. Kowalske is the lone holdover from Stevenson's 2013 MHSAA Division 2 championship team and is a member of the MHSAA's Student Advisory Council.

"Being on the Council, you learn ideas and what other schools do," Kowalske said. "It's really amazing people are so interested in what we're doing. To have everyone come out to the game really means the world and really means a lot to us that we're doing something right here. You saw Romeo, too. They had the city support. It's cool. You try not to let it distract you during the game, but now that it's over, it's cool. It wasn't the outcome we wanted, but we did the best we could. It's really cool the community could come together over something and just forget about the world for a couple hours and just have fun." 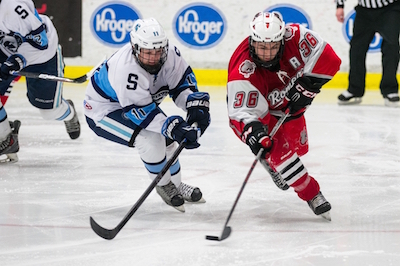 A defensive battle that was tied 1-1 for the first 23 minutes changed in a hurry as the second period neared its midway point.

With the game possibly slipping away, Romeo coach Nick Badder called what proved to be a critical timeout.

"We were down, they had all the momentum," Badder said. "I was telling (Adam) Krefski and the other assistants, 'Right now, they have all the momentum. We're on our heels, and we felt it. We calmed down the boys. Once they calmed down and realized it was shift by shift, we kind of took over."

Romeo got right back into the game before the second period ended, getting within 4-3 on Brett Lanski's second goal of the game with 2:34 left in the period and tying it when Luke Kaczor tipped in a shot from the point by Logan Ganfield with 1:30 to go in the period. Between the teams, six goals were scored during a 9:13 span.

Romeo was presented with a golden opportunity to break the tie when a Stevenson player received a five-minute major and game disqualification at 4:38 of the third period.

A power play that featured the highest-scoring player in the state wasn't going to miss over the course of five minutes. Jenuwine, who had 46 goals and 50 assists this season, scored what proved to be the game-winner at the 5:39 mark when he redirected a shot from the right point by Ganfield.

"To say it turned there, it turned because they capitalized," Mitchell said. "They still had to capitalize, so you give them credit for capitalizing. We still had multiple chances to score and they had multiple chances to score. As a coach, it's so tough to explain to a bunch of 15-, 16-, 17-year-old kids that it's not one moment, it's an entire game. There were 51 minutes that were played out there where multiple other things happened."

Stevenson (22-7-1) had three offensive-zone face-offs in the final 1:25, but couldn't generate a scoring threat.

There might have been another had Morris' shot from inside his own blue line missed the target, but he found the center of the net for the game-clinching empty-netter with 29.1 seconds to go. For good measure, Morris blocked a shot in the final seconds.

Before Saturday, the Bulldogs' only playoff run beyond the Regionals came last season when they lost 8-2 to Grosse Pointe South in the MHSAA Quarterfinals.

"Last year's loss in the playoffs hurt," Badder said. "Grosse Pointe South took it to us; they kind of owned us. We didn't have a playoff game plan; we didn't have a playoff style last year. This year, I was so hard on these guys. We lost two games, and I was still, 'Guys, we're not doing this right, we're not doing that right.' They're like, 'Coach, we just won 6-1.' I was trying to get a point across to them that you've got to be a playoff team. You have to hit. You've got to block shots. You've got to get the puck in your own end. It's not the high-flying (Blankenburg) and (Jenuwine) show. We're a team, and the team will win in the end."