“If the weatherman is in a co-operative mood, Michigan’s high school athletes, both boys and girls, will wind up another competitive school year Saturday,” wrote Detroit’s premier high school sports scribe, Hal Schram, 40 years ago just prior to the staging of the 1978 MHSAA softball and baseball state finals weekend.

“Let’s hope we get them in on schedule”, said Bob James, director of athletics for the Warren Consolidated Schools and a member of the MHSAA Representative Council. “I’ve been in high school sports for 35 years, and can’t remember a spring with more postponements and cancellations.”

Despite highest hopes, weather would, again, be a factor on the final weekend of the prep season. Games were scheduled for eight locations around the Lower Peninsula, with rain postponing Class B and Class C contests in softball and Class B and Class D in baseball.

In the 1979 yearbook, Impressions, published by East Detroit High School, staff celebrated school’s past half-decade of accomplishment and history:

“Girls have been playing softball at East Detroit now for almost 50 years, although it was called the girls baseball team until the mid-sixties. The teams have always done very well, many of them went undefeated, but none of them ever did as well as the 1978 squad.”

Roxanne “Rocky” Szczesniak, who would later earn All-American honors at Wayne State University, tossed a four-hitter and smashed a three-run homer as the Shamrocks eliminated defending Class A champion Portage Central, 6-3, in the day’s opening Semifinal, played at East Detroit’s Memorial Park. It was only the second defeat in 52 games for Portage Central, coached by Tom Monroe. 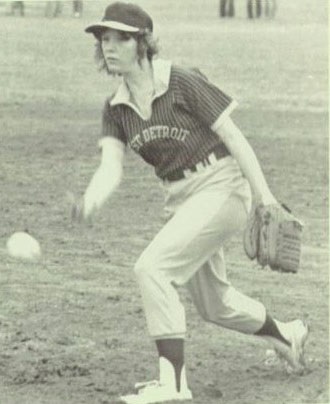 Waterford Township slipped past Flint Carman, 1-0, in 10 innings in the day’s second Semifinal, then capitalized on six errors by East Detroit in the title game to grab the Class A softball championship, 4-0. In the first inning, Mari Latozas doubled home a run to open the scoring for the Skippers. Waterford then added unearned runs in the third and fifth to seal the win. Coached by Joe Alsup, the Skippers finished the year at 25-3. He would post a 197-39 record in nine seasons at the school before it closed following the 1982-83 school year. Twenty years later, Alsup’s Waterford Kettering team earned the 1998 Class A softball crown. Today, he ranks fourth in all-time softball coaching victories in Michigan.

In Class B, Fenton cruised to their first of three straight titles with an 8-5 win over South Haven at Belknap Park in Grand Rapids on Monday, June 19, the game rescheduled because of the weather. Pitcher Barb Barclay posted her 24th win without a loss and boosted Fenton’s season mark to 28-1. Barclay was instrumental in the win at the plate as well with a triple and a single, while scoring three runs for the Tigers. With two outs in the third inning, Fenton rallied with four straight hits to open up a 2-1 lead. South Haven again jumped in front, 4-2, in the fifth, but Fenton bounced right back, again rallying with two down to open up a 7-4 lead.

“This was our biggest challenge of the season,” said Fenton coach Dave Lazar. “For a young team, South Haven is pretty good. They’re scrappers.”

It was South Haven’s second consecutive trip to the Finals. In 1977, the Rams lost to Grosse Ile, 5-3. South Haven would return to the Finals for a third straight time in 1979, again falling to Fenton.

Earlene Seeley, who would later play college ball at Ferris State, reached first base on a bunt, stole second, then scored on an error to give Shepherd a 1-0 lead over New Lothrop before rain forced delay at Brookwood Park in Clare on Saturday. Pitcher Deb McAvoy, who had hurled three and a third innings of no-hit ball, completed the first no-hitter in MHSAA title game history as Shepherd grabbed a 2-0 victory in the Class C championship on Monday. It would be six more years before a second no-hitter was tossed in the Softball Finals. Since McAvoy’s gem, 14 additional no-nos have been thrown in the MHSAA softball title game.

At Robinson Park in Ionia, Laingsburg swept to a 6-1 win over Central Lake for the Class D softball title. Junior Robbin Sawyer, who upped her record to 17-0 on the season, tossed a two-hitter in the Wolfpack’s 15-2 Semifinal win over Owendale-Gagetown and then held Central Lake to a single hit in the title game. Sue Hurst went 3 for 3 at the plate in the championship game, including singling home a run before scoring on the front end of a double steal, all in the first inning. Carrie Kooster tripled twice in the Semifinal, driving in six runs to lead the Wolves.

Boasting an outstanding pitching staff, coach Marv Rettenmund’s Flint Southwestern squad rolled through the regular season, then battled its way through the tournament before downing East Kentwood, 7-1, to win the first, and only, Class A baseball title in Flint-area history.

"Sometimes, you have pretty good players, and when you have them, you'd better cash in," Rettenmund told the Flint Journal 30 years later. 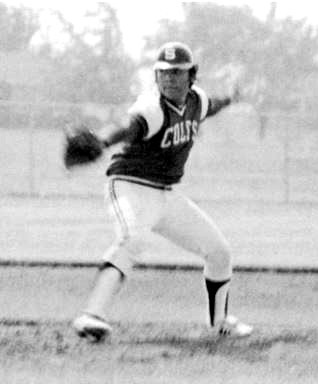 Blessed with a “1-2 punch of senior left-hander Ruben Luna (14-0 with a 0.82 earned-run average) and senior right-hander Risto Nicevski (9-1, 0.72),” Southwestern dropped only three of 35 games, (all by a single run) before rolling to 16 straight victories. Tournament play was “capped by five close games,” including a scare in the Semifinal, before the championship matchup.

Luna and Nicevski combined for a one-hitter in the title contest, played at Memorial Field in Wyandotte. Earlier in the day, Luna fanned 12 batters in a three-hit, 1-0 shutout of Plymouth Canton. Third baseman Bob Cardenas singled home designated hitter Al Weatherford in the fifth inning for the game’s only run.

"That was one of the toughest teams we played," said Rettenmund. Plymouth Canton’s Russ Mandle led off the seventh inning with a booming double between the gap in left and centerfield, but was gunned down when trying to stretch it to a triple. “We made a perfect relay — (left fielder Dale) Bennis to (shortstop Matt) Diment to Cardenas.

"That was a once-in-a-lifetime ballclub."

Tom O’Dowd allowed a single hit in Jackson Lumen Christi’s 10-6 victory over Spring Lake in Class B, played at Aquinas College’s Kimble Field in Wyoming. The game, rescheduled to Monday after Saturday’s rain, saw six errors mar Spring Lake’s dreams of a title. Three of Lumen Christi’s first four batters reached base or advanced on errors, and all scored as the Titans jumped out to a quick 3-0 lead. Dave Schonhard notched the game’s only RBI, doubling in a pair of runs in the second inning to increase the lead to five. O’Dowd, selected in the 12th round of Major League Baseball’s amateur draft by the Toronto Blue Jays earlier in the spring, claimed 14 strikeouts, but dealt with control problems, walking 13. Trailing 10-2 entering the bottom of the seventh, the Lakers took advantage, gaining four walks and notching their only hit to pull within four before O’Dowd was relieved and the side was retired.

The win capped a stellar school year for the Titans, who won the Class B football crown in the fall and the Tier II hockey title in the winter. 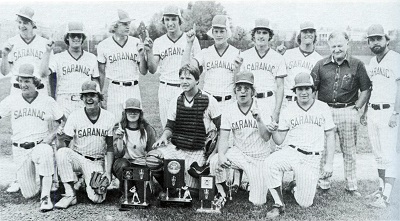 Delayed by heavy rain, Bay City All Saints pounded out 13 hits including three singles by Ed Pawlaczyk, to down Addison, 8-0, in Class C championship play at Marshall High School. Dave Shooltz allowed seven hits in five innings for the win. Randy Morse, who went the distance in the team’s 2-0 Semifinal triumph over Allen Park Cabrini, earned the save. It was the first of seven final game appearances by All Saints and their first of four state baseball titles. The seven visits to the championship game has been equaled by Grosse Pointe Woods University Liggett and exceeded by Harper Woods Bishop Gallagher, with eight. Blissfield leads the list with nine trips to championship games, and tops all schools for baseball state titles with seven.

With two outs in the top of the 10th inning, Saranac’s Steve Metternick doubled in two runs to break a 1-1 deadlock as the Redskins topped Frankfort 4-1 in the Class D title showdown. The game, played at Alumni Field on the campus of Central Michigan University, had been interrupted on Saturday at the top of the third, with Saranac leading 1-0. Southpaw Craig Coulson earned the win for the Cinderella squad, going all the way. The sophomore hurler allowed four hits, struck out eight and walked four on the afternoon. Saranac ended the season with 16 victories against 11 defeats.