ROGERS CITY – When the Rogers City bus rolled into town following a 2013 MHSAA Division 4 Softball Quarterfinal win in Traverse City, it made an impromptu stop.

It’s a memory that’s still vivid and holds special meaning for Grambau, who has built one of the most successful programs in the state. The Hurons are 223-46 since 2012.

On Saturday, top-ranked Rogers City opens District play by hosting Johannesburg-Lewiston. Posen and Hillman square off in the other bracket. The Hurons, 25-4, are seeking their seventh consecutive District crown.

“We need to focus on our game and not worry about anyone else,” third baseman Hannah Fleming said. “If we do that, we’ll be OK. We know what we’re capable of, and it’s our job to show everybody else.”

Rogers City reached the Division 4 Semifinals in 2013, losing to Kalamazoo Christian 2-0, and then came back in 2014 and won the title in a rematch with Christian, 3-2 in the championship game.

Reigning champion Indian River Inland Lakes has knocked the Hurons out of the tournament the last three seasons, twice in the Quarterfinals.

“We have the ability to make it to the Final Four,” shortstop Kayla Rabeau said. “We have a strong team.”

Grambau knows it will not be easy. There are no guarantees. In 2005, after a Division 4 runner-up finish the previous year, Rogers City was ranked No. 1 in the coaches poll but lost in the Pre-District.

“I’ll never forget that,” Grambau said. “When I got home (after the Pre-District loss), the final rankings had just come out and there we were, No. 1 and already out (of the tournament).”

Grambau believes this team compares favorably to the 2014 championship squad. He returned seven position players off a 34-6 team, including four all-staters – Rabeau (hitting .500), Hannah Fleming (.429), pitcher Jayna Hance (.495) and first baseman Taylor Fleming (.542). They are the first four hitters in the lineup and lead the team in just about every statistical category. Hance, a junior who has verbally committed to Northwood University, is 11-3 on the mound. Sophomore Kyrsten Altman is 13-1.

“They are the glue,” Grambau said.

The four were also standouts on the school’s volleyball team, which reached the Class D Semifinals for a second consecutive year, and the basketball team, which won its first District title since 2001. The Hurons reached the Regional Finals before losing to Bellaire in overtime.

“It’s been overwhelming, really,” Hannah Fleming said. “You always hope for that type of success, but not a lot of teams get to experience this. I’m humbled and excited to have had this experience my senior year. We have girls who are really dedicated and who will do whatever it takes.” 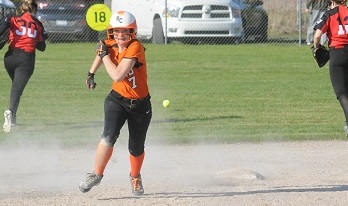 The Hurons are hoping the fun lasts a few more weeks. This is a tight-knit softball team that came up through the Little League ranks, followed by years of travel ball.

“We all play travel ball together,” Rabeau said. “We’re always together as a team. We’re dedicated to softball. That’s what makes us good.”

Classmates Rabeau and Hannah Fleming share much in common. The honor students played on varsity as freshmen in 2015. Hannah was at second that season because her older sister, Logan, now playing at Ferris State, was at third. Like now, she and Rabeau followed each other in the batting lineup.

“When Hannah hit her first home run (as a freshman), I hit my first right after it,” Rabeau said.

A year ago, the two shared the JoLen Flewelling Award, given to a junior who “shows great determination, dedication and sportsmanship.”

This season, Rabeau, who will play softball next at Mott Community College, was named the school’s Female Athlete of the Year.

“My mouth dropped,” she said after learning of the award. “When they were talking about me, I teared up. It’s been a dream of mine.”

Fleming, who will play softball at Alma College, was the North Star League’s Female Scholar-Athlete of the Year. She also received the Judy Paradise Award, given to a Rogers City senior athlete for outstanding sportsmanship and athletic ability. Fleming, a 3.88 student, is the senior class salutatorian.

“When the coaches explained how much (the award) means to them and the community, I felt truly blessed to represent Judy and Rogers City in that way,” she said.

There are only four seniors on the roster. In addition to Rabeau and Fleming, Jazmyn Saile is the designated player (.378 batting average) while Jordyn Schalk (.273) shares leftfield with junior Alissa Bowden (.316). Fleming and Altman (.290) rotate at second when not pitching. Junior Amanda Wirgau (.369) is the catcher while junior Linnea Hentkowski (.289) plays right. Freshmen Kristin Brege (.315) roams center, the same position her sister Cassie played on the 2014 title team. Kristin is the fifth Brege to play on varsity. Junior Brooke Daniels lends support at first.

“It’s a total team effort,” Grambau declared. “We get contributions from everybody.”

That was evident last Saturday in a tournament at Ogemaw Heights. Trailing Linden in the final inning, Rogers City had two on and two out when Catherine Hart (.342), Saile and Bowden delivered RBI singles to give the Hurons a 7-6 victory.

“A good way to finish the day in 90-degree heat,” Grambau said.

It was also a microcosm of how this team operates – one player picking up the next.

“Our girls battle, work hard and play with confidence,” Grambau said. “They always believe they will win. It’s a cohesive team. They support one another. And they liked to be challenged.” 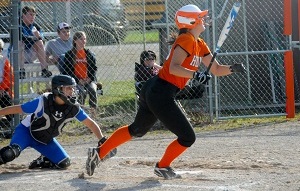 Rogers City started softball in 1984 when Jerry Chrzan, Paradise and Grambau arranged a bottle drive to gather funding. Chrzan was the first coach, and he led the Hurons for 11 seasons. Charlie Fairbanks took over in 1995 and coached until 2002. He led the Hurons to a Division 3 runner-up finish in 2001. Grambau succeeded Fairbanks and in his second season guided the “Cardiac Kids” to another runner-up finish, in Division 4.

“We called that team the Cardiac Kids because we won almost all our (tournament) games by one run or in extra innings,” Grambau said.

That run started with a 1-0 Pre-District win over a good Posen squad and included a 3-2 comeback victory over Vandercook Lake in the Semifinals when Ashley Fleming belted a three-run homer in the sixth inning. The Hurons eventually lost to Waterford Our Lady of the Lakes in the Final.

As for the keys to success, Grambau credits his dedicated players, volunteer assistants (Duane Pitts and Mike Bowden), a philosophy of keeping the sport fun for the girls and “tremendous” support from the community.

But at the core of the success is the Little League program.

That’s why that stop at the Little League fields in 2013 was so meaningful to Grambau. It ranks as one of his two special moments in coaching.

The other, of course, is the state championship.

“These girls talk about that (title),” Grambau said. “They were there to see some of the games and the celebration (afterwards). They would like to experience that, too.”

He’ll take a battle-tested team into play Saturday. On Sunday, his seniors will graduate – making it an opportunity for a full weekend of celebrations.

“I’m happy to play at home,” he said. “We play well on our home field. We play with extra confidence. I’ll tell the girls it’s just another game of softball, but at the same time you know there’s a lot on the line.”

PHOTOS: (Top) Rogers City shortstop Kayla Rabeau, right, and coach Karl Grambau share a joyful moment. (Below) Hannah Fleming rounds second base and heads for third after a throw gets through to the outfield. (Below) Taylor Fleming follows one of her shots this season. (Photos by Richard Lamb/Presque Isle County Advance.)