That made sense for a couple of reasons.

At that point in the fifth set, Romeo led Novi by five points. That was much more comfortable than when the Bulldogs were falling in the third and fourth games after winning the first two.

But the most sizable reason for her brief moment of relief was 6-foot-1 junior Gia Milana – the “hot hand” and talk of this season’s Finals at Kellogg Arena.

The Bulldogs entered the weekend with five hitters tallying at least 147 kills this season and talked of a plan to spread the attack. But Milana had 19 kills in a three-set Semifinal win over top-ranked Temperance Bedford, and her 29 Saturday tied for sixth-most in MHSAA Finals history since the start of rally scoring in 2004-05.

“The plan from the beginning was to spread the ball out like usual. We like covering our middles, confusing their blocks, but today it was feed the hot hand,” Milana said. “The hot hand wins.

“I wanted (the ball) to go to whoever would put it away, because all I wanted was to win. But feed the hot hand. That’s what (setter) Lauren (Korth) did, and we got it done.”

Novi – playing in its first championship match – was No. 2 at the start of the postseason and had beaten Romeo in a tournament final during the regular season – although Romeo didn’t have a full lineup for that event. The Wildcats finished 54-6-1 after making the Semifinals for the second time in program history.

Milana had six kills in the final set, her second-most of the five although the fifth is played to only 15 points.

She had only two as Romeo, leading 2-0, dropped the third set to Novi, which then won the fourth despite 11 Milana kills. 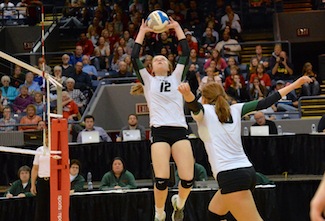 That had to be a good sign for Novi, which also had dropped the first two sets in its Semifinal win over Grand Haven on Friday before coming all the way back.

“We played pretty disciplined defense. We’d done our scouting. We had shot charts where she likes the ball,” Novi coach Jennifer Cottrill said of Milana. “She just hit the ball so high, and our biggest player is 5-9ish, 5-10 maybe. She’s just hitting the ball over the block, and it wasn’t just her. That team passes well and sets her the ball where she needs it.”

Novi’s comeback came in part on the arm of junior Victoria Iacobelli, who had six of her team-high 19 kills during the third and fourth sets, and the defense of senior libero Jordan Massab, who had nine of her game-high 23 digs in those games.

With three kills by Milana, Romeo opened the fifth set up 7-2. Novi pulled to within two of the lead at 8-6, but two more Milana kills and four Novi errors turned into the Bulldogs’ closing 7-3 run.

Korth, a senior, had 43 assists to go with 11 kills, 12 digs and five blocks for Romeo. Sophomore Jodie Kelly added 13 kills and 11 digs.

Junior Paulina Iacobelli and sophomore Alyssa Cummings both added 14 kills for Novi, and freshman Erin O’Leary’s 47 assists tied for seventh most in Finals history during the rally scoring era.

With so many key contributors on both sides expected to return, it would fair to anticipate these teams meeting in Battle Creek again in 2015.

“We have a lot of young players touching the ball a lot,” Cottrill said. “Just having this experience of being here and knowing what to expect will definitely help us.

NOVI IMPRESSES - Novi turned the tables in the third set against Romeo, winning in impressive style. Alyssa Cummings smashes the ball for the set point.

MILANA BRINGS IT HOME - Romeo captured the Class A crown in five sets over Novi, the winner coming on this kill by Gia Milana.