GRAND RAPIDS – The Hudson competitive cheer team has been a staple at the MHSAA Finals for nearly two decades with 19 appearances, including 18 straight.

But the Tigers had been unable to reach the pinnacle of the sport.

A long time in the making, Hudson’s perseverance finally paid off when it captured that seemingly elusive Division 4 title Saturday at the DeltaPlex.

“I knew it was going to be when the opportunity came,” Hudson coach Kelly Bailey said. “We’ve had great teams in the past, and I knew one time luck would meet with our opportunity, and we would do it. This was the year, and we had a great group of girls.”

The Tigers placed runner-up at the Finals five times, including three straight years from 2008-2010.

They finished a close second again last season to Breckenridge, which didn’t field a team this year after winning three consecutive Finals.

“I’m on cloud nine right now,” Hudson senior Payge Leathers said. “The feeling is unexplainable. This is my fourth year at the state finals, but finally breaking through and winning a state title has been the most overwhelming and exciting experience of my life.”

The Tigers, who won the Lenawee County Athletic Association crown, were ranked No. 5 entering the postseason.

“I knew it from the beginning this year,” Hudson senior Shiann Martinus said. “We clicked so well all year, and I’ve never had a team so bonded.  We all wanted the same goal and we did anything to get it, and we got it.

“We were three points away last year so we definitely didn’t want to cut it close this year, and we practiced like crazy.”

Hudson held a slim two-point lead entering the final round, but pulled away from the field with an impressive Round 3.

It capped the meet with a high score of 316.60, eight points better than the next closest team.

“They did a fabulous job in Round 3, and you can’t ask for anything more,” Bailey said. “They were under the most pressure they could be going last and everybody had stuck their cheers. There was two points separating us, and they nailed it.” 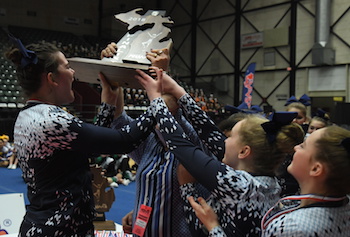 Bailey took a different approach to this year’s Finals and didn’t put extra pressure on the team with high expectations.

“We tried to really focus on celebrating our year today, that it wasn’t a competition,” she said. “It was a celebration of our year from the start, and we really focused on having fun. All the work was over, and this is what the hard work was for. They just needed to have a blast today.”

The squad, which featured five seniors, didn’t concentrate on anything but its own effort.

“The whole time nobody focused on a state title,” Martinus said. “We focused on going out to do our best. This (title) comes with it when you do your best.”

Sanford Meridian also had a breakthrough performance in earning its first top-two finish at the Finals.

This was the Mustangs’ third appearance, and they didn’t qualify last year after placing sixth at Regionals.

“We knew we could either take it or be within the top three,” longtime Sanford Meridian coach Val MacKenzie said. “I think our goal was met, and it was a goal we constantly worked toward.”

The Mustangs, who had no seniors on the roster, jumped into contention with a stellar Round 2 that accumulated the highest score of the day, 224.16.

“The girls have worked really hard this year and we’ve really concentrated on our Round 2 with our tumbling and getting back tucks, because we knew that’s what it was going to take to get us where we needed to be,” MacKenzie said. “I’m very proud of how they bought into the program, and they are so dedicated. They are just a good bunch of girls.”