GRAND RAPIDS – Coming into this season, Hudson had just one MHSAA Finals championship in competitive cheer – to go with five runner-up finishes.

Those close calls have made the Tigers better, not bitter, especially last year’s razor-thin heartbreaker to perennial powerhouse Pewamo-Westphalia by less than four tenths of a point.

“Honestly, the runner-ups have been motivation to work on all the little things and to push us to where we are today,” said senior Anna Valdez.

Where Hudson is today is atop the Division 4 cheer world, after using a powerhouse second round to take the lead and then holding off a furious charge from P-W on Saturday at the Delta Plex.

Hudson won with 770 points, followed by P-W with 767.80 and Addison at 762.36. Those top three teams separated themselves early on, with Adrian Madison finishing a distant fourth at 751.34.

The Tigers, who had four runner-up finishes before breaking through for a title in 2018, have now won two of the past three years.

It sure didn’t look like it was going to be Hudson’s day early on. The Tigers drew the first slot in Round 1 and came out flat, trailing not only rival P-W, but also Addison (coached by Jessica Sword, daughter of Hudson coach Kelly Bailey), entering Round 2.

“It’s always hard to go first in Round 1,” explained Bailey, who is in her 23rd year as Hudson’s coach. “That’s a tough spot to be in, and we were really nervous today and I’m not sure why.”

Despite the shaky start, the Tigers delivered a virtuoso performance in Round 2, which is judged primarily on precision and synchronization. 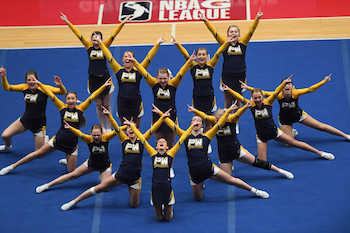 “We definitely knew we had some wobbles in Round 1 and it wasn’t our best,” said Valdez, one of five seniors on Hudson’s roster. “Round 2 has always been our power round and the round that always gets us ahead by a little bit.”

That dynamite showing turned a half-point deficit into a nearly five-point lead entering the final round.

However, Bailey and her team were not taking anything for granted against a Pewamo-Westphalia team known for dominating Round 3. Exhibit A happened just one year ago, when the Pirates came from behind and edged the Tigers by less than a half-point.

P-W, which has won nine Finals titles and now has 11 runner-up finishes, certainly did its part. The Pirates went fifth out of eight teams and delivered the best Round 3 score in the Division 4 field at 313.0.

Hudson was next up and the pressure was on to avoid a repeat of one year ago. The Tigers delivered a solid, if not spectacular, Round 3 to hold on for the championship.

The win was particularly satisfying for Hudson’s five seniors – Valdez, Lyndsey Tanner, Anna Loar, Savanna Proudfoot and Summer Walker – who will graduate with two championships and two runner-up finishes during their four years of high school.

Bailey, who, in her 23rd year, is one of the deans of the state’s competitive cheer coaches, is also one of the most calm on the coaching podium – leaving all of the clapping and gesturing to her two assistants, Lyndsi Hall and Jacque Marry.

“I want to be calm up there,” explained Bailey, whose team was champion of the Lenawee County Athletic Association and won all but one of its competitions this winter. “I don’t want to confuse them or make them think that I’m upset with something.

“That’s always been my style. I’m still the same – the girls keep getting stronger and more athletic every year, though.”