An early exit from the postseason tournament derailed the celebration.

Van Noord was two wins shy of joining an elite class of coaches who have won 500 games.

“I knew going into Districts last year that there was a chance, but then we lost in Districts and I didn’t think about it much,” Van Noord said. “Then this season started and I saw a plaque in the press box and I thought, ‘Oh man, this is going to happen this week.’”

Following Spring Break, Van Noord did reach the 500-win plateau with his team’s 6-1 victory over Zeeland East on April 13.

The victory was another milestone for one of the state’s top baseball programs – but also for the Eagles’ dominating programs on both diamonds.

Softball coach Tom Vruggink, who turns 66 next month, has been a mainstay at Hudsonville for 35 years and instrumental in turning that program into a state powerhouse.

Vruggink has nearly doubled Van Noord’s win total. He began the 2016 campaign with a 941-243 record and is the eighth all-time winningest coach in MHSAA softball history.

Combined, Van Noord and Vruggink have more than 1,400 wins.

“That’s incredible, isn’t it?” Van Noord said. “I wish I had his pitchers through the years, and they’ve had some incredible teams. He has a special way with girls.”

Van Noord, 53, is in his 22nd season as the Eagles’ head coach. He began his coaching career in 1991 at Lakewood Lake Odessa, where he spent two years before receiving a teaching job in Hudsonville.

He replaced longtime coach Larry Byle, who retired in 1994.

Van Noord has received help through the years from longtime assistant coach Joe DeSmit, and support from his wife, Sue.

“We’ve coached together 21 years, and there is no way I would’ve been able to stay in it without Joe,” Van Noord said. “We basically co-coach together, and my wife has put up with so much, especially my bad moods when the team’s not playing well. I wish the older that I get, the better I would be with losing, but I’m not.”

Van Noord said he was thrilled to accomplish the feat with this year’s group, which started 4-1 before suffering a four-game losing skid.

“It was cool for this team to do it,” he said. “Joe and I really like this team. We didn’t play very well last week, but the first week was good. It feels like a classic Hudsonville team.”

The Eagles were competitive through the early stages of Van Noord’s career, but were unable to make lengthy postseason runs.

That all changed in 2009 when the program claimed a District title. Three years later, Hudsonville won its first MHSAA Division 1 championship.

“We always thought if we could get by Jenison or Grandville, which were both good, then we could make a run and that would be sweet,” Van Noord said. “We won our first District in 2009 and went to the Quarterfinals. That’s when we got it going and started winning O-K Red championships. The state title was a cool thing to do.”

Van Noord looks back fondly on all of the players he has coached.

“I coached pairs of brother and trios of brothers and just a lot of good kids,” Van Noord said. “They believed in what we did and they worked hard. They all come from good families, and it has been special to be a part of that for so long.”

Ironically, Vruggink had aspirations to coach baseball. However, softball became his calling.

“My dream was to always get a baseball job somewhere,” said Vruggink, who began his tenure in 1982. “I got the softball job here before that and never looked back.

“It was tough at the beginning going from a male athlete coaching football and then coaching girls in softball. It’s a lot different working with girls than the boys, and that was the biggest adjustment.”

Vruggink has no regrets over his decision to stay involved in softball.

“I’ve loved it, and I think it is the best coaching job around,” he said. “I have kids who work hard and they love to play. The parents are so supportive of what the kids are doing and what we are doing as a program.” 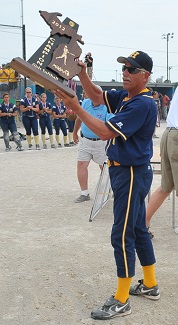 The Eagles have won three MHSAA Division 1 championships under Vruggink’s guidance. They won back-to-back crowns in 2009 and 2010, and again in 2012.

“We’ve been very successful through the years, and all of the state championships are special in their own way,” Vruggink said. “We were close a lot of times and finally broke through in 2009 and got that first one. To do it twice in a row was special, and then we overcame a big hurdle in 2012 in our first year without Sara Driesenga (who has gone on to star at University of Michigan). That team had something to prove.”

Vruggink’s wife, Patty, has been with him every step of the way as the team’s scorekeeper.

“She’s in the dugout every game, and she’s like an assistant coach,” Vruggink said. “I bounce things off her like I would any other coach and it’s been great.”

Vruggink, who taught fourth grade for 31 years and now is retired from the classroom, isn’t showing any signs of slowing down.

Although hanging up the cleats and bat is talked about at times, he can’t imagine life without coaching.

“Right now, I’m still having fun and I get fired up every year for the beginning of the season,” Vruggink said. “It will be a difficult thing to say ‘this is my last year,’ because there’s always that next girl coming up you want to coach.”

Players from Van Noord’s past were among those who reconnected after his recent milestone win.

“They did a nice presentation for me after the game and that was cool,” Van Noord said. “I don’t look back much, and the years have added up quickly, especially the last 10 years. It’s been a whirlwind recently, but the best part of it was the social network.

“I’m tied in with so many people and I must’ve had 50-75 texts and emails from staff, former players and other coaches. It was so cool to just connect with those people again.”