GRAND RAPIDS – Breckenridge’s Dakota Colthorp was part of a group of wide-eyed and enthusiastic fifth graders who wanted to be involved in competitive cheer.

At the time, the high school didn’t have a team due to low numbers.

Seven years later, Colthorp and her elementary school classmates have become instrumental in helping restore the program to the dominant level it had been accustomed to in the 2000s.

Breckenridge captured its second straight MHSAA Division 4 Final on Saturday at The DeltaPlex.

“It’s incredibly special for us,” Colthorp said. “We didn’t have a team for awhile, and our group of seniors are the ones who brought it back. We started in fifth grade and have not left since. The seven of us went through middle school with this program and we helped rebuild it to where it is today. It’s incredible to say that we are back-to-back state champions.”

"It's very special because we've wanted this for a long time," Guthrie said. "We've had family members who have won before, and we wanted to do the same. My cousins cheered in 2007."

The seniors were motivated to end their high school careers with another top finish.

“For the seven of us, it’s the last time being able to do that,” Colthorp said. “So we made sure to give it our all and leave it all out on the mat. It might not have been perfect in the warm-up room, but we came together and gave it our best on the mat.

“We put in a lot of hard work in and it was very rewarding to be here and be able to bring home the trophy.”

The Huskies repeated for the first time since 2007, the last time they won an MHSAA Division 4 championship.

“They were very committed and dedicated,” Gaines said. “They were key to our program coming back, and others followed. I think some of them had perfect attendance through the years. There were very few absences.” 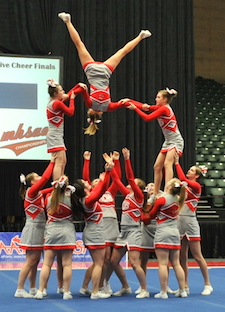 Huskies co-coach Jenna Graham said the seniors have always been there to lend support.

“We’ve relied on them for motivation on and off the mat,” she said. “They’ve really tried to step up and be the leaders we needed this year. They’ve been here so long that we just expected that out of them and stepped up to it.”

It was a different environment this season for Breckenridge than the last time they were here. The Huskies were now the team everyone was chasing.

“They were just here to do their thing last year, no pressure,” Graham said. “But this year was different. We had to defend that title. Defend and repeat has been our motto all season.”

Added Gaines: “It’s hard to repeat in anything. We just had to keep stepping up our game and going for it. Rounds 1 and 2 were exceptionally strong, and in Round 3 they just delivered.”

Round 3 did have early drama for the Huskies. They had a nearly seven-point cushion entering the final round; however, an early fall tested their resolve.

“We were hoping to have that lead so there was a little room for error,” Graham said. “We trained them how to deal with that when it happens.”

“Anything can happen out there,” Gaines said. “It’s all about how you recover and how you fight back harder.”