BATTLE CREEK – Pontiac Notre Dame Prep volleyball coach Betty Wroubel has won 772 matches over the last 20 seasons. She had brought one other team to an MHSAA championship game, the eventual Class B champion in Fall 2007.

But it’s a fair argument none of her best dominated quite like her Fighting Irish did this fall in finishing off their second MHSAA title – although they had to win one of their toughest matches to finish the run.

Notre Dame, the top-ranked team at the start of the tournament, beat No. 3 North Branch in Tuesday’s Quarterfinal, then No. 2 Wayland in the semi before surviving a late surge by No. 5 Grand Rapids South Christian to win the championship match Saturday in four sets, 25-15, 25-19, 19-25, 25-23. 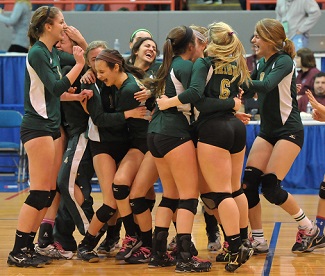 After falling behind two sets to none, the Sailors (46-12-1) simply wouldn’t go away – and nearly drew even in the fourth after trailing by as many as five points.

But the Irish’s dominant front line was just a little too much to overcome as it finished with 60 kills – good to tie for eighth-most in MHSAA Finals history during the rally-scoring era.

“We’ve been through so many challenges and all of these teams that we’ve been playing, and our team chemistry is just so amazing; we can just trust each other and be confident with ourselves,” Notre Dame junior hitter Katherine Carlson said. “We finished because we can really just trust each other on the court. We were getting our passes, getting our sets (and) we could just go up, be confident, be aggressive and swing.”

Notre Dame’s only losses this fall were to Class A Semifinalist Temperance Bedford and honorable mention Lake Orion. But it wasn’t until the North Branch win Tuesday that Wroubel became convinced her Irish were prepared to finish the week with the program’s second title.

Carlson had with 25 kills Saturday, tying for ninth-most in an MHSAA Final, followed by senior Dani McCormick with 17 and junior Jenna Sassack with 12. The Irish (62-2-1) also had the sixth-most assists in a Finals, 58, and piled up 85 digs with four in double figures led by sophomore Emma Kowalkowski with 20 – tied for 10th most in Finals history.

“What Katherine Carlson does just amazes me sometimes on the court. I don’t know how she has that court sense, how she knows sometimes where to put the ball. There’s some rallies, and the other team is getting some confidence, and she comes up and puts the ball on the floor and brings it back to us,” Wroubel said. “And Dani McCormick the last four to six weeks has been outstanding.

“In volleyball, if you have one good player out there, you’re tough to beat. You have a couple of them, and you’re going to have to play some darn good defense to knock them off.” 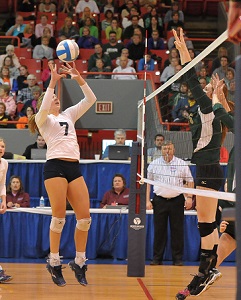 But as the match went on, South Christian’s strengthened. The record book will list a few Sailors performances as well – their 10 blocks make the list, with junior Ashley VanderHorst’s seven ranking among the top individual totals.

South Christian coach Allison Sagraves called Notre Dame the toughest team hers played in the tournament, but the Sailors hung tough after the disappointing start.

That was characteristic of the team’s season. It lost a key middle blocker for the rest of the fall on Oct. 24, which could’ve sunk the Sailors – but instead became a turning point. South Christian was in a bit of a lull at that point, but emerged and didn’t give up a set in the postseason until the championship match.

“I thought we kept fighting no matter what, and the end of Game 4 just showed what these girls have. Just because they had 24, that didn’t mean we were going to roll over and end it,” Sagraves said. “We fought right back, and we really believed we were going to come back and win.

“We talked about that in our timeouts: We’re fighters, and we’re not going to quit, and we’re going to force them to beat us.”

Five seniors started for South Christian, and hitter Taylor Wierenga finished her final high school match with 17 kills, while Cassidy Vredevoogd had 13 and middle Danielle Oeverman had 10. Senior setter Emily Blankespoor had 41 assists, and five Sailors had double-digit digs: Blankespoor and sophomore Abbie Porter with 14 apiece, Vredevoogd with 12 (along with five blocks) and senior Morgan Torres and junior Clarissa VanderHoning with 10 apiece.

PHOTOS: (Middle) Pontiac Notre Dame Prep hitter Katherine Carlson follows through as her teammates anticipate a kill during Saturday’s championship match. (Middle) The Irish celebrate their first MHSAA championship since 2007. (Below) South Christian’s Danielle Oeverman sends the ball toward the net as two Notre Dame blockers prepare to deflect it.