GRAND RAPIDS – Allen Park took its turn Saturday with the upper hand in one of Michigan’s best – and most intense – high school rivalries.

The Jaguars got the better of Downriver League and regional competitive cheer rival Gibraltar Carlson during the morning’s MHSAA Division 2 Finals at the Delta Plex.

“It was our year,” said 15th-year Allen Park coach Julie Goodwin, who previously guided the Jaguars to Division 2 titles in 2010 and 2017. “To be the best, you have to beat the best. Today was our day.”

The two schools now have combined to win the past 13 Division 2 cheer titles – Carlson has 10 and Allen Park three.

Allen Park triumphed in convincing fashion, posting the highest score in all three rounds to win by nearly three full points, a relatively lopsided victory in a rivalry that often is decided by tenths of a point.

Making the title even more impressive was the fact the Jaguars won it with no returning first team all-staters and just two seniors, co-captains Jessika Palmarchuk and Emily Obrycki-Smith.

“The past three years I’ve had eight, nine and eight seniors; now this year I only have two,” said Goodwin, who is assisted by Meghan Terry, Kim Isom, Tina Johnson, Jessica Tremonti and Theresa Couturier. “But that doesn’t change our approach at all. I do have 11 juniors, and they are a very strong, committed, bonded team this year.”

At that point, Goodwin broke from tradition.

“She doesn’t usually tell us (the scores), so we’re kind of blind, but she told us this year,” said Palmarchuk, a flyer. “It made us fell less nervous. We knew if we went out there and hit it, that (the title) would be ours.” 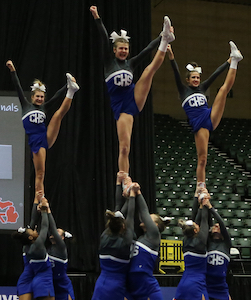 The Jaguars, performing fourth out of eight teams in the pivotal Round 3, put an exclamation point on their victory with a solid stunting performance and a score of 321.90.

That put tremendous pressure on Carlson, which went seventh in the final round. The Marauders proved their mettle with a strong showing, but their score of 320.50 was not enough.

All that was left after that was the official announcement. With all eight teams huddled on the mat, the public address announcer revealed Carlson as the runner-up, which led to an explosion from the Allen Park team, coaches and fans, who chanted: “AP! AP!”

Carlson has posted 11 overall cheer titles, which rank second in state history behind Rochester’s 14, and now has six runner-up finishes. The Marauders beat Allen Park last month for the conference title, but took second to the Jaguars at their Regional.

First-year Carlson coach Emily Howard was seeking to become the sixth cheer head coach to lead the school to a Finals title.

“It’s a great rivalry and it’s not over, that’s for sure,” said Howard, an assistant coach last year who moved up to replace Ann Hajec, who led the team to the 2019 championship in her only season as head coach. “They had the edge all day today.”

Carlson cheer has not finished worse than second at the Finals since 2007.

PHOTOS: (Top) Allen Park celebrates its Division 2 championship Saturday at the Delta Plex. (Middle) Gibraltar Carlson performs a routine on the way to a runner-up finish.