Leasa Griffith was introduced to Bronson’s Jean LaClair while officiating one of LaClair’s volleyball tournaments.

She received further insight into LaClair’s care for her athletes when, a few years later, LaClair asked Griffith to serve as a Legacy Official mentor to a Bronson player.

With LaClair leading as athletic director, Bronson moved this school year into the first-year Berrien-Cass-St. Joseph Conference. So did Mendon – where Griffith is co-athletic director – and that’s given her another opportunity to appreciate LaClair’s mentorship firsthand.

“I look to Jean whenever I have a question, or even if I just want to run an idea past someone. She is always readily available and gives me great advice,” Griffith said. “I honestly cannot think of another person who deserves to be recognized by the MHSAA for a ‘Women in Sports Leadership Award’ more than Jean LaClair.”

LaClair will receive the MHSAA’s 28th WISL Award during the Class A Girls Basketball Final on March 21 at Michigan State University’s Breslin Center.

The honor, given annually by the MHSAA Representative Council, recognizes the achievements of women coaches, officials and athletic administrators affiliated with the MHSAA who show exemplary leadership capabilities and positive contributions to athletics.

“I never would’ve thought I’d receive this award,” LaClair said. “I just go out and do my job to the best of my ability every day. The people before me have done magnificent things. I’m just doing the daily grind of my job.”

She downplays as well the numbers that come with her reputation as an elite coach. LaClair is best known for leading high-achieving athletes for more than two decades as one of the winningest varsity volleyball coaches in MHSAA history.

Her accomplishments speak volumes on their own.

She has built a career record of 958-327-85 over 21 seasons as a varsity volleyball coach at Midland Dow, Pinconning, and for the last 15 seasons Bronson High School. She ranks 10th on the MHSAA career victory list for volleyball coaching wins and led her 2009 Bronson team to the Class C championship. 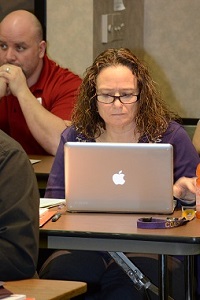 She also has served as Bronson’s athletic director since fall 2000 and hosted a variety of MHSAA tournament events in addition to sitting on a number of MHSAA and Michigan Interscholastic Athletic Administrators Association committees. LaClair was a speaker at MHSAA Women in Sports Leadership conferences in 2006 and 2008 and also has been a registered MHSAA official for 14 years.

“Jean LaClair is a role model for her athletes, and also for administrators who look to her for expertise and mentorship,” said John E. “Jack” Roberts, executive director of the MHSAA. “She is a respected voice who offers valuable knowledge and guidance to those at every level of educational athletics. We’re delighted to honor her with the Women In Sports Leadership Award.”

LaClair is a 1984 graduate of Midland Dow High School and 1989 graduate for Saginaw Valley State University, and she also earned a Master’s in sports administration from Central Michigan University. She began her varsity coaching career at Dow during the 1987-88 season and coached through 1990. She led Pinconning’s varsity from 1996-97 through 1999, then came to Bronson as the athletic director only that fall. She then resumed her coaching career in fall of 2000.

In addition to the 2009 MHSAA title, her teams have won five Regional championships. Her 1997-98 Pinconning team finished Class B runner-up.

LaClair is a member of both the MIAAA and National Interscholastic Athletic Administrators Association, and served as MIVCA president for six years, vice president for three and as a board member for 13 years. She also served a term as president of the St. Joseph Valley League and as an instructor for the MHSAA’s Coaches Advancement Program.

“I love coaching. It’s the time I get to deal with some good kids. We have a great summer, and it feeds into the fall,” LaClair said. “I feel when kids leave my program, they could be coaches. I do try to get them in involved in officiating as well.”

She previously taught mathematics and physical education before becoming a full-time athletic director, and also became as assistant principal at Bronson High School during the 2010-11 school year. She continues to pull off the time-consuming coach-athletic director double in part because of superior organizational skills, but mostly because of supportive administrators who with another game manager help her to make sure everything is covered especially during the volleyball season.

PHOTOS: (Top) Bronson volleyball coach Jean LaClair huddles with her team during a match. (Middle) LaClair, also Bronson's athletic director, sits in on a league and conference meeting at the MHSAA office this winter. (Top photo courtesy of the Coldwater Daily Reporter).