PLYMOUTH — They provided the depth for the 2015 Birmingham Brother Rice hockey team, earning MHSAA championship medals right along with the big-name seniors on that squad.

But this was their team and their moment to shine. For the four seniors who are holdovers from that team, there was a deeper sense of accomplishment after beating Grand Rapids Forest Hills Northern/Eastern, 7-0, to win the MHSAA Division 2 championship Saturday at USA Hockey Arena.

It was the fourth MHSAA championship for the Warriors (25-4-1), who won titles in 1992, 2012 and 2015. Jack Clement, Alec DeLuca, Michael McInerney and Mitch Shults are the holdovers from Brother Rice’s 2015 Division 2 championship team. They join 2015 graduate Nick Rosa as the only Warriors to play for two MHSAA title winners.

Shults had 14 points, Clement 13, DeLuca 12 and McInerney nine as sophomores. They all scored at least 30 as seniors.

“It definitely feels different,” said Clement, who had a goal and an assist Saturday. “As seniors, we helped lead this team. As sophomores, we were kind of behind the scenes a little bit more. Now to lead the way for these guys is really special.”

Shults had a goal and set up two others after dishing out three assists in a 5-2 Semifinal victory over No. 2 Hartland, the team that came from behind to oust Brother Rice, 5-4, in overtime last season.

“We knew after last year that all the guys would be looking toward us,” DeLuca said. “We knew what to do. We knew what it took. It was really special being seniors. It was an unbelievable feeling.”

Northern/Eastern (20-9-2) was playing in its first Final, having lost in the 2008, 2012 and 2016 Semifinals. A 5-2 loss to eventual champion Romeo in last year’s Semifinals fueled this year’s run to the championship game.

“That gave us motivation to go into the summer,” Northern/Eastern senior Wyatt Radakovitz said. “The two of us (Radakovitz and Matt Pakkala) got the whole team together. We started workouts right when summer started, getting out there at 6 a.m., hitting the weight room and everything. Everyone had that gut and passion to get back to the Finals.” 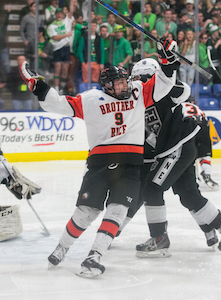 Brother Rice was ranked No. 1 across all three divisions by Michigan High School Hockey Hub, while Northern/Eastern was unranked, but the first period ended scoreless.

After dominating the shot board with a 10-4 advantage, the Warriors established control on the scoreboard with three goals during the first 5:41 of the second period.

Clement got it started 60 seconds into the period, pinching from his position on defense to backhand a shot past Brenden Bogema.

Brother Rice created some distance when Shults scored off a faceoff at 4:31 of the second and Will Duncan converted a pass from across the crease by Shults 1:10 later to make it 3-0.

“It’s contagious for them,” first-year Brother Rice head coach Kenny Chaput said. “Once they get into that mode, it’s very tough to stop them.”

Radakovitz had a chance to get Northern/Eastern back in the game while killing a penalty, but he fired wide right on a breakaway with 14:58 left in the game.

“That gets it to 3-1 and you never know what happens,” Northern/Eastern coach Tom Bissett said.

From there, the Warriors turned it into a rout with four goals in a 6:27 span.

Ryan Hoffmann made 25 saves for the shutout, the fifth in a Division 2 Final and first since 2008.

“To be honest, and no disrespect to any team we played this year, but I knew with the cast of characters we had that if we went out and played our game, we would be the best team on the ice,” Chaput said. “I had that feeling from day one, and I never lost it. I understood the talent level we had, but I also understood the competitive nature.”