PORTLAND – Hopefully Brandon Scheurer always remembers his most thrilling five minutes in high school baseball like they were five minutes ago.

“There was a runner on first, two outs, and I got hit a ground ball right at me. I'm not going to lie; (I was) a little nervous there and I kinda came up on it a little bit, almost booted it, but I got it in my glove, flipped it to our second baseman and he got the force out at second for the last out,” Scheurer recalled this week. “Honestly, after that it was like blacking out a little bit. I heard the cheers and the roar after we got that last out. We all went and jumped on each other, and after coming out of the pile and kinda coming back down to Earth a little bit I saw my dad and just went over and gave him a huge hug and then saw my Uncle Bryan and gave him a huge hug.

“He's like, all that, everything we’ve done, has been working towards this moment right here.”

Brandon Scheurer wants to enjoy that moment one more time.

Sports, St. Pat’s and Scheurers have been synonymous for three decades. And Brandon, the second-oldest of this next generation of Scheurer Shamrocks present and future, has more than propped up the family tradition.

Scheurer is finishing his fourth varsity season manning shortstop for what is again the top-ranked team in Division 4, and is signed to continue his career at Saginaw Valley State University. Uncle Bryan is in his 15th season as varsity baseball coach, and the team has won nearly 75 percent of its games under his leadership. Dad Mark is Bryan’s forever assistant, plus just stepped down after 19 years coaching basketball including the last 12 guiding St. Patrick’s boys varsity.

Mark Scheurer won nine letters at St. Patrick before graduating in 1989, then walked on at Central Michigan University and played himself into three seasons as a starter. Bryan also was a three-sport standout graduating from St. Patrick in 1996, played on a national championship baseball team at Grand Rapids Community College in 1997 and then starred at CMU while becoming an Academic All-American in 2001.

The family athleticism extends farther than dad and uncle. Brandon’s mother Jill was a gymnast at CMU. Cousin Dylan Carroll played football at Grand Valley State and recently signed a free agent contract with the Chicago Bears. Cousin Chase Fitzsimmons is the Shamrocks’ catcher, and cousin Nathan Lehnert a top pitcher. Both of Brandon’s younger sisters are three-sport athletes. The lone older cousin, Mallory (whose dad Jeff is Mark and Bryan's older brother), was a three-sport athlete at St. Patrick and graduated a year ago.

“I hoped he’d never have that pressure, but some comes with (the name),” Bryan Scheurer said. “But he’s a better high school player than Mark or I were. Mark was just OK, I had more over-the-fence power, but I didn’t have the arm (Brandon) has in high school.

“He’s just a coach on field, just a complete player with all the things he can do to help us win.”

Brandon, like Bryan, was a quarterback growing up but stopped the sport after a broken left femur suffered on a tackle in eighth grade led to three months in a cast with 8-inch pins holding things together. Instead, Brandon spent one fall season as a sophomore running cross country, and all four winters with Dad on the varsity basketball team. Brandon scored more than 1,000 points with an MHSAA record book-qualifying 201 3-pointers over 81 games.

On the diamond, he's a two time all-stater and academic all-stater. This spring, heading into Thursday’s doubleheader against Fulton, Brandon was hitting .569 with 12 doubles, three triples and 29 RBI while leading off, plus had stolen 23 bases. He’d also struck out 43 with just four walks in 21 1/3 innings pitched, and hadn’t given up an earned run mostly serving as the team’s closer.

He’s been around sports since before he could walk. Mark used to hire a student to watch Brandon in his car seat as an infant during basketball practices, and Brandon has been every kind of ball boy and had his dad and/or uncle as coaches in everything going back to at least seventh grade. 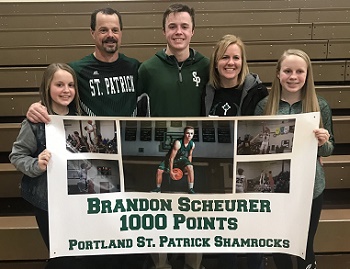 A son of two teachers, academic prowess also doesn’t fall far from the tree. Scheurer is ranked second in his graduating class with a GPA over 4.0 and will study mechanical engineering at SVSU. He was a finalist this winter for an MHSAA/Farm Bureau Insurance Scholar-Athlete Award, given to only 32 seniors statewide.

“We’ve always told him lead your own life, lead your own path, and you’ll be judged accordingly,” Mark Scheurer said. “He’s always been driven by numbers, by academics, wanting to be the best.

“For me and for Jill, it’s just been an awesome ride watching him and being able to be a part of it as a dad and as a coach. People ask me about the stress of it, but I wouldn’t have it any other way.”

Brandon’s Scholar-Athlete application essay focused on how Mark taught him at a young age to win with humility and lose with grace, and Brandon said he’s learned most from his dad and uncle how to be a leader and what leadership really means. “There's a lot of things that go into it,” Scheurer said. “The leader isn't just the guy that leads stretches and the guy that's the captain of the team. From the worst guy on your team to the best guy on your team, you have to know how to address every single person and what everybody needs to hear.”

With St. Patrick also finishing Division 4 runner-up his freshman season, and then going 20-8 a year ago before falling in its District, few players in the state have enjoyed as much success or experienced as much at tournament time.

The seeds were planted early, but Brandon especially remembers when he and Bryan – his confirmation sponsor – watched “Remember the Titans” together as part of Brandon’s prep. They were supposed to find and discuss aspects of faith in the movie. They both also remember watching the ending when T.C. Williams High School wins a Virginia state championship, and discussing how it would feel to be part of something like that together.

A few months later, they experienced it themselves at McLane Baseball Stadium.

With some star power plus the deepest bench and pitching since Bryan Scheurer has been coach, they are on track to give it another shot. St. Patrick is 23-1 and opens play Monday in the Capital Diamond Classic against Division 2 DeWitt, before facing Division 3 top-ranked Pewamo-Westphalia for the Central Michigan Athletic Conference championship next Friday. Both should serve as valuable preparation for a run at Division 4.

“I think it's a good start; I don't want to say it's over yet,” Brandon Scheurer said. “This is definitely a good start to the kind of year we wanted to have, especially after last year. (Finishing) 20-8 for a lot of teams is really good – it's a great year. But for how we played the two years before that, 34 wins back to back years, it's just kinda how we got used to playing.

“We want to try to make that run into June again. That's a goal this team has and that I have personally – I want to get back there. I want to try to win another state championship, because that was one of the coolest things that's ever happened. Especially seeing my dad and uncle afterward, the hugs we gave each other, that's something since I've been really little that we've always worked for and tried to work towards.

“They came really close, and to actually get them that was awesome. But I'd love to do it again.”

PHOTOS: (Top) Brandon Scheurer in 2017 picks up the grounder that led to the final out of the Division 4 championship game. (Middle) Scheurer, with his parents and sisters, celebrates reaching the 1,000-point milestone this past basketball season.