EAST LANSING — The last thing Marissa VanDenBerg wanted to talk about was her game-winning triple.

She wanted to give credit to Grandville Calvin Christian teammate Kennedy Stevens, the No. 9 hitter whose game-tying single made VanDenBerg’s heroics possible.

She also didn't mind talking about the two big defensive plays she made to snare foul balls from her shortstop position, one of which was responsible for the bandage wrapped around her left forearm.

"I'm just used to getting injured," VanDenBerg said. "It's OK. It's fine. It happens."

What hasn't happened for the Squires since 1994 is a trip to an MHSAA softball championship game, a drought that ended with a 4-2 come-from-behind victory over Millington on Friday in the Division 3 Semifinals at Michigan State University. Calvin Christian (33-10) will face reigning champion Monroe St. Mary Catholic Central for the title at 3 p.m. Saturday at MSU's Secchia Stadium.

Down 2-1 in the bottom of the sixth inning, unranked Calvin Christian scored three runs to hand fifth-ranked Millington (42-2) only its second loss of the season and end the Cardinals' 31-game winning streak. Stevens tied it with a two-out single to right, and VanDenBerg broke the deadlock with a two-run triple to center field.

Stevens, the No. 9 hitter, has the lowest average among the Squires' starters at .293. But with Millington pitcher Taylor Wright about to strand runners in scoring position for the third straight inning, Stevens lined a single to right field to bring home Kendall Bouma with the tying run.

"To be honest, I haven't had a hit that big in a long time," Stevens said. "It means a lot. I didn't really know where I hit it until after I came back to the dugout and people told me. With how powerful their crowd was, there was a lot of noise going on and distraction. You really have to focus. It's hard at times."

VanDenBerg, the only senior who played for the Squires on Friday, stepped up and crushed a pitch to center field. The Cardinals’ center fielder took one step in before running back to chase the fly ball, which just eluded her outstretched glove short of the warning track. Jaycie Bos, who walked, and Stevens scored to put Calvin Christian ahead, 4-2.

A lot of credit also was directed back at VanDenBerg, not only for her game-winning triple, not only for her two great plays to catch foul balls, but for the leadership she provides an extremely young team. Calvin Christian had seven sophomores, two juniors and a senior in its 10-player lineup (including designated player) on Friday against a freshman-laden Millington team.

"She's so positive and energetic and always seems to know what to say at the right time," Calvin Christian coach Mike Gruppen said. "Then she comes up with big plays. She leads in all ways with her verbal leadership and her leadership on the field. It's unbelievable."

Stevens is one of the sophomores who have benefitted from VanDenBerg's guidance throughout an up-and-down season in which the Squires lost 10 games. Stevens said that VanDenBerg's poise was particularly important as the Squires went deep into the game, still trailing by a run.

"It was hard to pick us back up," Stevens said. "You always have those doubts going through your head. You have a whole team cheering you on and backing you up, especially our shortstop. Marissa VanDenBerg helped a lot, picking us up and bringing us together. She brought us up when we were down. That helped a lot, having a leader like that on our team. She's always talking to us, always cheering us on."

Scoring any runs against Millington was going to be a difficult chore, considering the Cardinals came into the game with eight straight shutouts, outscoring six postseason opponents by a combined 59-0 margin.

That shutout streak ended quickly, as Calvin Christian took a 1-0 lead in the top of the first inning. VanDenBerg led off by reaching base on an error, scoring on a bases-loaded single by Kim Moelker. There could have been more damage in the inning, but Kaleigh Whitcomb was thrown out at the plate for the second out while trying to score on the play.

Millington responded in the top of the second inning, as Sydney Bishop led off with a single and scored when the ball was thrown around following an infield single by Kayli Leix.

A dropped infield popup opened the door for Millington to take a 2-1 lead in the fourth. Taylor Rueger reached on the error, was bunted to second by Taylor Wright and scored on a two-out single to center field by Leix.

Wright escaped a huge jam in the fifth inning. With runners on second and third and one out, she struck out the next two batters to keep Millington ahead by one.

The Cardinals couldn't continue to hold off the Squires, however.

Wright got a strikeout to begin the sixth before Bouma singled and Bos walked. Wright got another strikeout to move within one out of getting out of trouble again before Stevens and VanDenBerg came through with their big hits.

Calvin Christian's rally denied Millington its first appearance in an MHSAA championship game in any sport. The Cardinals made the 1993 Class B volleyball Semifinals, losing to Marysville. Their football team reached the Semifinals in 1994, 1999, 2009 and 2010. The softball team never won a Regional title before this season, getting to the Semifinals despite having five freshmen among nine starters and eight freshmen on a 12-player roster.

"We definitely have girls coming up through our program now," seventh-year Millington coach Greg Hudie said. "We built a love for softball in Millington in the last couple years. We have kids coming back and more kids coming up. The future is very bright."

One of the few losses for the Cardinals will be a key one. Wright, one of only two seniors on the team, had 12 strikeouts Friday. The loss was her first after 22 victories. Millington's only previous loss came against Division 1 10th-ranked 1 Canton in a game in which Wright didn't pitch.

"She's been a role model for a lot of great young pitchers coming up," Hudie said. "We've got some really great pitching coming up. We've got a great freshman pitcher who was our third baseman today (Gabbie Sherman). We've got some lower-level pitchers who absolutely adore Taylor. She made them want to work harder. The wins she's picked up, she means a lot to us. She'll be hard to replace, for sure, but she started all this."

Calvin Christian will play in its fifth MHSAA championship game. The Squires won Class C titles in 1988 and 1993.

Meghan Beaubien can admit it now.

"I wouldn't tell anybody, but last year I was pretty nervous," she said. "In both games, I guess. This year, I'm super comfortable. You always have butterflies in your stomach, but I wasn't as nervous as last year." 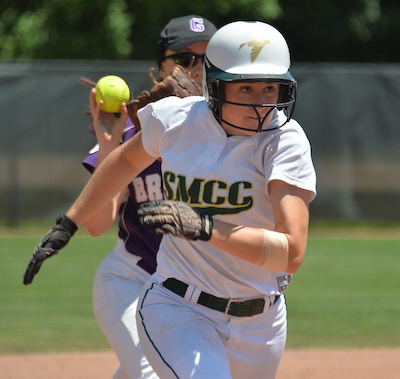 Beaubien did just fine at MSU last year, allowing only two hits and striking out 30 to lead Monroe St. Mary to victories in the Semifinals and championship game.

The University of Michigan commit, who is still only a junior, took it to another level against Gladstone in a matchup of the last two Division 3 champions.

Beaubien struck out 13 of the 15 batters she faced, pitching a five-inning perfect game. Gladstone didn't hit a ball out of the infield.

"She's the real deal," Gladstone coach Ashley Hughes said. "We were talking about her before this game. Obviously, we knew she was going to be tough. They have a really great team. They're hitters. They're fundamentally sound. The better team won today."

St. Mary pounded out 19 hits, with 12 players getting at least one. Kenna Garst was 3 for 4 with three RBI, while Brooke Angerer was 3 for 3 with two RBI and three runs.

The Kestrels scored four times in the first inning, then broke open a 7-0 game with six more in the fifth.

"This could be our best overall hitting performance," St. Mary coach John Morningstar said. "People know with (Beaubien), three runs is the kiss of death. If you give up three runs, there's no chance of coming back."