EAST LANSING – A year ago, Logan Buczkowski watched as his brother, Hunter, pitched Mount Pleasant to victory in the MHSAA Division 2 Baseball Semifinals.

On Friday, it was Logan’s turn to propel the Oilers into the championship game, and he did it with six shutout innings as Mount Pleasant downed Adrian 9-0 at McLane Baseball Stadium on the campus of Michigan State University.

Hunter Buczkowski will be on the mound at 11:30 a.m. Saturday when Mount Pleasant goes for back-to-back MHSAA championships in baseball for the first time in school history.

“The Buczkowskis are workhorses,” Oilers coach Luke Epple said. “Logan threw well, and he has been throwing well. He threw strikes and was getting ahead of hitters and changing speeds.

“He was ahead of hitters, and they couldn’t read his soft-speed stuff versus his fastball. He had good stuff. He is throwing very well for a sophomore.”

Logan, who throws what he calls a knuckle-drop, said his stuff was the complete opposite of his previous outing, when he had his fastball but struggled with the slow stuff. He pitched six innings and allowed three hits with three walks and six strikeouts Thursday.

“My knuckle-drop was working,” he said. “I couldn’t find my fastball at first, but my junk pitching came in well for me.”

Logan also sparked the Mount Pleasant offense. Hitting fourth in the lineup, he was 2 for 3 with a walk as part of the Oilers’ 15-hit attack.

Mount Pleasant (27-12) scored in each of the first six innings. The Oilers had three runs in the third and two in the second, and had a single run in each of the other four innings.

Speedy junior Kalebb Perry was 3 for 4 with two runs scored and an RBI, and two of his hits were triples to start an inning.

“I was just trying to hit the ball, to be honest,” he said. “I’ve been slumping lately. I’m just trying to get myself consistent and get my feet under myself so I can contribute to the team.

“I had a run like this in basketball, but I’ve never played for a state title. My adrenalin is pumping right now.”

Mount Pleasant goes into the championship game on quite a roll. The Oilers have recorded shutouts in six of their seven postseason games and have outscored their opponents by a combined 69-2 during that span.

“I couldn’t ask for anything better than my offense,” Logan Buczkowski said. “It felt really good to have a comfortable lead, and it really eases the pressure for me.”

Epple made mention of the pressure, not only playing for an MHSAA championship but trying to repeat as well.

“These kids have played here before, but they might have some nerves,” he said. “I still get nervous before games, and I have been coaching a long time. These kids are more hungry than nervous.

“We’ve won before, but we’ve never repeated, and that should be a huge goal for this squad.”

Adrian, which finished 26-10, used three pitchers against the Oilers, and none lasted three innings. Noah Solis, Ty Peck and Mitchell Dempsey each had a hit for the Maples.

“We just didn’t have our game today for whatever reason,” Adrian coach Greg Jackson said. “Whether it was the moment, I don’t know, but I thought our kids were loose and had a great approach, and then the wheels fell off a little bit.

“Mount Pleasant has a very good baseball team, very sound. We’re hoping to be back here next year. Our kids got a taste of it, and hopefully they are hungry to get back here.”

For Mount Pleasant, the time is now. The Oilers will face Orchard Lake St. Mary’s in the championship game, and Epple believes Hunter Buczkowski will be up for the challenge as the starting pitcher. He pitched and won the Quarterfinal game on Tuesday.

“A couple more days of rest should help,” Epple said. “He threw about 95 pitches at the Quarterfinal, and he was throwing long toss about 300 feet today. He said he felt strong.”

Hunter also will have a little brother watching his every move.

“I’m going to support him. Every moment,” Logan Buczkowski said with a big smile.

Orchard Lake St. Mary’s junior pitcher Drake Titus did not change his outlook after his team gave him a 5-0 lead in the bottom of the first inning.

“I have tremendous confidence and trust in our defense.” 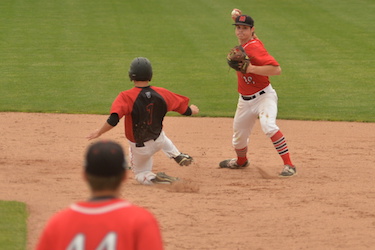 The five-run first inning put Orchard Lake St. Mary’s in control, and Vicksburg never recovered. Four singles, two walks and an error helped account for the five runs, and those were enough for Titus.

“He’s such a bulldog,” Orchard Lake St. Mary’s coach Matt Petry said. “He changes speed. He was getting ahead of most hitters, and he was throwing strikes. He makes the other team beat you, and he did an excellent job.”

“The first districts and regionals we kind of struggled to score some runs early, but the last two games we’ve come out swinging up and down the lineup,” Petry added. “It’s great for us to get out to a lead like that, especially with a young team that hasn’t necessarily played in an environment like this.”

The youngest of that group would be 14-year-old freshman second baseman Carter Macias, who went 3 for 3 with a run scored and an RBI.

“We talk about jitters, and the youngest kid out here – 14 years old – went 3 for 3 and was key in turning three double plays for us,” Petry said. “He did a great job for us.”

Petry hinted that left-hander Greg Loukinen will start on the mound for the Eaglets but added it was not a final decision.

“We have to see how everybody is feeling at practice, but I would assume so,” Petry said.

Vicksburg coach Brian Deal praised the pitching by Titus, who allowed one run on four hits with six strikeouts and one walk.

“Fantastic fastball and curveball, and he had us on our heels all game long,” Deal said. “He shut us down right from the get-go, and we’re a team that scores some runs and swings the sticks a little bit.”

Vicksburg (27-8) set a school record for victories in a season and won its first Regional championship and Quarterfinal.

“We’ve had a great run this season, and it’s been a lot of fun with these guys,” Deal said. “What you saw today was not what we’ve done all year long; it was sort of an anomaly for us.”