Senior Emily Kutch was in tears as coach Kellie Rowland charged onto the court and grabbed her and senior Olivia Davis. Rowland and her assistants – husband Clair and former head coach Jeff Duits – then met for another hug as a few decades of almost-there dissolved into distant memory.

Those three – and a number of these players – have been at this championship chase for a while. But the Vikings finally got their title with a 25-20, 25-18, 25-17 victory over perennial power North Branch.

Rowland has brought Lakewood to the season’s final week seven more times during a 15-year career that has stretched over two tenures and includes 787 wins. But with four four-year varsity players on the court, she and a large group of fans and alumni finally got to celebrate ending with a victory for the first time.

“We worked so hard for this. Everybody’s been saying this was the year, this is the team to win it all. And we did,” Kutch said. “Just winning in three (sets), and dominating like that. All of us seniors; there are seven of us and we’ve been together forever. And I think that carried the emotion too.”

Lakewood finished 52-4 to cap its first trip back to Battle Creek since the final winter season, in 2007. The Vikings had played in one other championship game, in 1995, when they lost to Stevensville Lakeshore.

Lakewood thought for a moment that it had earned the first point of Saturday’s match, but a close call went North Branch’s way. The Broncos actually got off to a 2-0 start in that first set – but Lakewood would outlast them to take it, 25-20.

Both Kutch and Broncos coach Jim Fish agreed that first game was key. Lakewood seemed to build momentum in winning the second 25-18, and then closed out the title with a 25-17 win capped by a final kill by Kutch that touched just before the back line on the Broncos' side.

Kutch and Davis, two of those four-year seniors, had 18 and 14 kills, respectively. At 6-foot and 6-1 they had a slight height advantage on their opponents, and took advantage. 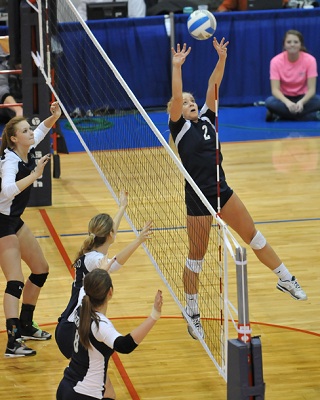 “Oh my gosh, I didn’t want it to go into a fourth game. The heart can only take so much, and I’m not very young,” Rowland said. “They just really executed and did what they needed to do to beat them.

“We have the size, we have the speed and we have the quickness. And Brooke Wieland, out setter, really felt it in warm-ups. Our hitters were like, ‘Just keep setting baby, because it’s right where we need it.’”

Wieland and libero Beth Tingley also were four-year varsity seniors. Weiland had 31 assists and 11 digs in the Final, and Tingley had 11 digs as she helped key a defensive adjustment meant to combat North Branch’s strong outside attack.

The Broncos (68-8-1) got 11 kills from senior Micaela Deshetsky and 13 digs from senior libero Rachel Fish, who were both contributors when the team finished Class B runner-up in 2010. This was its third trip to Battle Creek in four seasons – North Branch won the title in 2009.

“I couldn’t be here my freshman year because I was sick, but when we lost my sophomore year there was a bitter taste, so we were ready to be back,” said Fish, a daughter of the coach. “All our emotions, everyone’s heart was really in it. We wanted it bad. But they were really good. Lakewood played really well against us.”

And neither was able to dodge the other contenders. The Vikings were ranked  No. 1 coming into the tournament and North Branch was No. 2. Lakewood then beat the Nos. 3, 6 and 7 teams to make it to the end, while the Broncos eliminated Nos. 4 and 5 plus two honorable mentions to get to this point.

“We had a rough road to be able to get here, and I’m extremely proud of what they’ve done,” Jim Fish said. “There is not a negative involved in this. It was very positive, a great run, what high school athletics is all about.