MOUNT PLEASANT – Lowell coach R.J. Boudro knew his wrestling team wasn't going to just show up Saturday for the Division 2 Final and walk away with its fourth straight team title.

He knew as far back as last year that there was a new team in the state trying to muscle its way to the top of the division that the Red Arrows have controlled since 2014.

Undefeated Warren Woods Tower pushed Lowell hard all the way to the end of their championship match at Central Michigan University's McGuirk Arena, before the Red Arrows proved that they were just a little bit better, winning 32-21.

The problem for the Titans may have been the starting weight.

Instead of starting in the lower weights, where Warren Woods Tower is strongest, the Finals started at 135 pounds. Lowell picked up the dual's first win when talented freshman Austin Boone won by major decision.

From there, the Red Arrows won six of the next eight weight classes to race out to a 25-7 lead with five classes to wrestle.

The Titans won the next three, all by bonus points, as David Stepanian won by pin at 103 and Chaise Mayer and Elijuh Weaver won by major decision victories at 112 and 119, respectively, to cut the Red Arrows’ lead to 25-21. 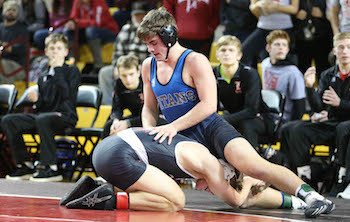 That's when the championship match took an unexpected turn, when Lowell's Jeff Leach was awarded four penalty points late in his bout at 125 when the Woods Tower wrestler, who had top control over Leach, did not bring Leach to the mat in a proper time while both were on their feet.

"We wrestled hard, but there were some matches where we thought we would do a little better in," Mayer said. "We needed some more bonus points in the lower weights where we missed out on some. But that's not here nor there. I thought we wrestled hard; they are just a good team."

Boudro said his team did what it had to do to win.

"Today we fought all over the mat and fought for every point," said Boudro, whose team ended its season with a 21-2 record. "We saved some bonus points at 112 and 119, and that kind of ended up sealing the deal for us. “The way it ended … it was kind of a weird ending to the dual, but it was a great dual, and I think the fans got what they came for."