EAST LANSING – Before John Fleming took the mound, he was already a touchdown ahead.

When he left it a couple hours later, he and his Jackson Lumen Christi teammates were Michigan High School Athletic Association Division 3 baseball champions.

Fleming, a junior right-hander, fashioned a four-hitter, and the Titans rode their early lead to an 8-0 victory over Buchanan on Saturday at Michigan State’s McLane Baseball Stadium.

The victory gave Lumen Christi – which entered the MHSAA tournament with a 16-16 record – its first championship since 1978.

“We play in a really tough conference,” Lumen Christi coach Phil Clifford said. “We play Division 2, Division 1 teams all year. We think it’s vital to our preparation as a team so that when we get to the tournament we feel like we’re ready. It’s the schedule, really. That helps us.” 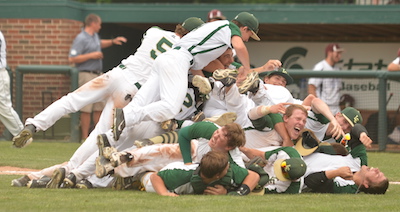 A six-run first inning doesn’t hurt the cause, either. The Titans (24-16) sent 11 hitters to the plate and collected six hits off Buchanan starter Dalton Riddle. A two-run single by Connor Mogle and a two-run triple by Connor Fors were the big blows.

“They got around on some good fastballs on Dalton and they hit them hard,” said third-year Buchanan coach Lonnie Hoover, who had the Bucks (24-8) in an MHSAA title game for the first time since 1985. “I think we’ll be back here next year, and we’ll have a lot more experience coming back here. We’ll be back and we’ll be better and stronger.”

A Mogle RBI single in the second inning upped the lead to 7-0, and from there Fleming cruised as his teammates made all the plays behind him in turning in an error-free performance.

He was a model of efficiency, throwing just 87 pitches (54 for strikes). He struck out two, walked just one, and rarely did the Bucks manage to hit a ball sharply.

“My plan is to always pound the strike zone, change speeds, hit spots, throw what coach tells me to throw,” he said. “My guys on defense – I can throw strikes and they’re going to make a play for me.”

PHOTOS: (Top) A Lumen Christi runner beats a throw into third base during Saturday’s Division 3 championship game while Buchanan’s Gavin Morris prepares to collect the relay. (Middle) The Titans celebrate their first baseball title since 1978.