BATTLE CREEK — Allie Havers is an overpowering presence on the softball field. But the situation called for finesse.

She dropped down a perfect suicide squeeze to bring home the tying run in a two-run sixth inning that carried the Wildcats to a 2-1 come-from-behind victory over Bay City Western in the MHSAA Division 1 championship game Saturday at Bailey Park.

Two batters later, freshman Genny Soltesz drove in what proved to be the winning run by slapping a two-out single to center field.

Havers had a dominant performance in the pitching circle, striking out 11 batters and allowing only two hits. One of those hits was a home run to center field by Kaylynn Carpenter in the fourth inning.

Havers had five home runs and only one sacrifice all season, but she didn’t flinch when coach Alicia Smith called for a squeeze with one out and runners on first and third.

Havers laid down a bunt that didn’t even draw a throw home. By the time third baseman Diondra Heading got to the ball, Sarah Johnson was almost to the plate with the tying run. Johnson began the rally with a one-out single.

“I knew she was ready,” Smith said. “I’ve got seniors on the corners and a senior at bat. We can’t ask for a better storyline.” 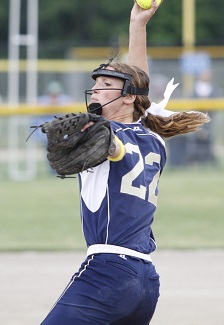 The Wildcats had to battle nearly every step of the way during this postseason run. They trailed Portage Central 4-2 in the fifth inning of the District Final before winning 5-4. They were down 2-0 to Saline in the Quarterfinal before forcing extra innings and winning 7-3. They trailed Romeo 1-0 before a three-run fifth inning in the Semifinal carried them to a 3-2 victory.

“We’ve played under pressure many times,” Havers said. “When there’s pressure on, then we’re on. It was a wake-up.”

Mattawan needed to rally once again because Western’s first hit of the game was a home run over the center-field fence by Carpenter on the first pitch of the fourth inning.

The Warriors (37-3) were in a position to win a third straight 1-0 decision. Hannah Leppek was just as dominant in the circle for Western, striking out 10 and giving up only six hits. She had thrown 40 straight shutout innings until Mattawan scored twice in the decisive sixth inning.

“Ahead 1-0, I knew we had six outs to go. But we also had to go through the top of their lineup,” Western coach Rick Garlinghouse said. “That was the third time seeing our pitcher. They have a strong top of the lineup, and they got to us.”

Singles by Johnson and Abby Stoner with one out gave Mattawan runners on first and third for Havers. After her game-tying bunt, Soltesz slapped a single to center field to score courtesy runner Sarah Hillsburg for the winning run.

“I knew the ball was moving around a lot and I knew I had to square up on it and make sure I got all of the ball,” Soltesz said. “She threw me the perfect pitch. It’s amazing. I can’t really believe it.”