BATTLE CREEK — It’s natural for coaches to worry about the unknown as their teams venture deeper and deeper into the postseason.

He imagined some difficult scenarios for his squad once it reached the final week of the MHSAA Division 2 tournament.

“We thought coming into the quarters, we’d run into a buzz saw pitcher where we’d have to win a 1-0 game,” Nowak said. “It turns out we had the buzz saw pitcher. She was the best here, flat-out. She was brilliant.”

The buzz saw the rest of the Division 2 contenders had to worry about was Tecumseh senior Emily Maves.

Maves dominated three state-ranked teams from the Quarterfinals on, striking out 33 batters and allowing only 10 hits in 21 innings against No. 1 Stevensville Lakeshore, No. 2 Livonia Ladywood and No. 7 Saginaw Swan Valley. The only two runs she allowed in those games came in the seventh inning of a game the Indians were leading 5-0.

“It just feels amazing,” Maves said. “I was relaxed out there. I wasn’t nervous at all.”

Maves had a no-hitter going until Kelli Halvin singled up the middle with two outs in the sixth inning. Her shutout bid ended when Reegan Flattery scored on an errant pick-off attempt at third base in the seventh.

“I actually didn’t even know I had a no-hitter going,” Maves said. “I just tried to throw strikes.” 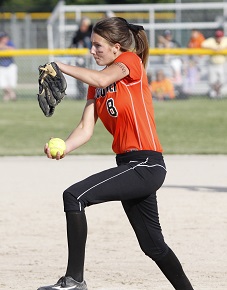 Maves finished with a 21-2 record, but Nowak said she pitched at a different level late in the season.

“She had a few bumps and bruises along the way,” Nowak said. “She only had two losses, but she was prone to have a couple of hiccup innings. Since the Canton tournament when we faced Canton, that’s when she came into her own and has been exceptional since then.”

Tecumseh took a 1-0 lead in the third inning when Kelsea Kaliszuk singled home Claire Burnett. The Indians expanded their lead to 2-0 in the fifth when Katie Martin grounded out to second base with McKenzie Rowe on third.

Tecumseh got some breathing room in the seventh by tacking on three runs. Kelsey Rendell delivered the first two runs with a double. Kylie Hill singled in the final run.

“With a two-run lead, I would’ve been a little more nervous,” Nowak said. “Those three runs were huge. Emily went out there feeling good. They put a runner on base (in the seventh), but we were fine at that point. It was just cruise control, get the outs and celebrate.”

Swan Valley had back-to-back singles to lead off the seventh and scored a run, but couldn’t seriously threaten. Maves closed the door with two strikeouts to end the game.

“I thought we finally got relaxed hitting wise in the last two innings, but by that time it was over,” Swan Valley coach Tom Kennelly said.

PHOTOS: (Top) Tecumseh players and coaches celebrate their Division 2 championship Saturday. (Middle) Emily Maves prepares to fire a pitch during the Final on the way to her third win over a ranked opponent during the season's last week. (Click to see more from Hockey Weekly Action Photos.)