When people in Michigan’s volleyball community hear the name Kelly David, they might think first of the standout from just a few seasons ago. A four-sport standout for the Aggies, she set the volleyball team into the 2009 Class D Semifinals before going on to play at St. Clair Community College.

David, 20, graduated from high school a little more than two years ago, but is continuing to have an impact on the volleyball court – although now from the sideline as coach of the No. 3-ranked team in Class D. She took over the Beal City program this fall from her former coach, Randy Gallagher and has the Aggies 26-5-1.

Coaching has come naturally for the former floor leader, who already has gained valuable experiences and knowledge to share with her players. She previously coached at the junior high and club levels, the former for her aunt Sue Frederiksen – who coaches Almont’s varsity and is a member of the Michigan Interscholastic Volleyball Coaches Association Hall of Fame.

David is majoring in elementary education at Central Michigan University and sees teaching and coaching in her future for many years to come.

Why did you decide to become a coach?

I played at St. Clair (Community College) for two years, and my aunt had always been into coaching. I ended up coaching her seventh grade volleyball team for two years, and I coached in the Skippers AAU program over there. I found out I liked coaching more than playing.

How have you approached coaching a team that includes players who were freshmen when you were a senior in high school?

Going into it, I knew I wasn’t their friend; I was their coach. I wasn’t close to any of the girls except my sister (Monica, a senior). The people who coached me or were my teachers, (who said) go to class, do this, and you knew they received ultimate respect. I had helped out in previous years, and I knew what I had to do to gain that respect. And (my players) have listened to me.

Did you anticipate questions about you taking over the program only a few years out of high school?

I knew in my head, but I didn’t think it would be a problem in people’s minds. "She’s young, her sister is on the team;" that’s the stuff people might second guess. But I knew how to control the team, and having my sister on it wasn’t a big teal. So far (issues) haven’t happened. I’ve coached teams in previous years, and I’d always been the leader when I did play. I think that helps.

What were your goals coming into the season?

I had a lot of goals. Obviously, I wanted us to go far, like in the past. The biggest thing I noticed playing college from high school, the players knew the game of volleyball. They were smart. They had the same athletic ability as those I played against in high school, but they were just smarter. Knowing how to position the ball on the court, knowing the game, and I wanted to teach (my players) the game of volleyball. It’s important to know the game, and then we can work around the obstacles.

What did you learn by watching your aunt coach?

Just how strong you have to be. When I watch her coach, she’s very enthusiastic. But when someone does something wrong, she lets them know. That’s an important thing.

When did you first know you were interested in coaching?

When I was in high school, when I played, I’d help the other players. I noticed that was something I liked to do. I’d watch someone and pick up things they could fix. I thought about it in high school, and once I actually did it with the seventh graders, it wasn’t a job for me. It’s fun. Coaching is something I want to do. They want to be playing volleyball – that’s why they’re on the team. Everyone wants to be there, and we’re trying to accomplish the same thing.

What has been the biggest challenge during your first season?

The biggest challenge is handling the pressure. I know the team can do well. We’re ranked third in the state right now. But it’s getting them to perform the way they can perform, getting them to come together at the right time.

I’d also like to mention that Beal City (already) had a great program, from (former coaches) Randy Gallagher and before I came, Kelly Knuth. I’m just happy to step in and try to continue what they did.

PHOTO: Beal City huddles during a break in its match against Shepherd this season. (Click to see more from HighSchoolSportsScene.com). 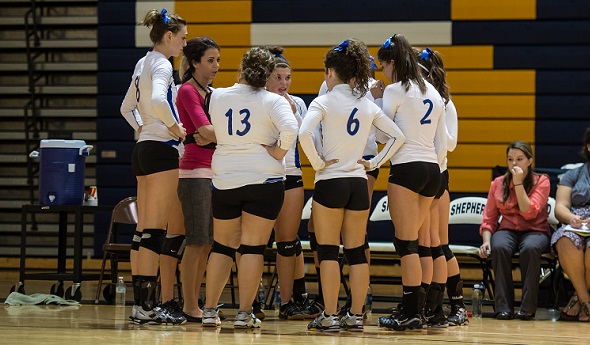