After cheering through middle and high school, Gibraltar Carlson competitive cheer coach Christina Wilson started coaching the Marauders’ middle school team the season after she graduated from Carlson High in 2001. She took over the varsity team in 2007 – and has accomplished in a short time what many coaches hope for over decades.

Carlson has won three of the last four MHSAA Division 2 championships – also finishing runner-up in 2010 – and is ranked No. 1 in its division heading into District competition this weekend. The Marauders have had a strong program throughout the history of competitive cheer as an MHSAA sport – they won the Class B championship in 1995 under Pat Christiansen and finished runners-up three straight seasons after that – but are on a run unequaled over the last five seasons.

Bowling Green, Eastern Michigan and Oakland’s cheer teams now boast former Carlson athletes, and all of this success could be just the start – Wilson may have accomplished a lot early in her career, but she said she hopes to keep the Marauders rolling for years to come.

What kind of things did you learn from your high school coach that you still teach today?

As soon as I started coaching middle school – we also got a new coach at the varsity level as well, so we had new coaching throughout the program at that time – I took and got the resources from our former coach in ’95 (Pat Christiansen) and started using all her resources. Everything she implemented and used for her teams, I took and continue to use today

Her daughter (Tami) coached with her in ’95 when we won the state championship, and she recently came back in 2010 as one of our assistants. She brought back that mentality of ’95 of working hard … the harder the practices the more successful you’ll be … make practices count enough so on Saturdays you can be as prepared as you can be … and the importance of making of making good decisions, in practice and outside sports as well.

Your program had success previously. But what happened to take Gibraltar Carlson to the next level?

I started coaching middle school, and by the time I moved up to varsity all (my) rules and procedures, the kids were used to it and it was (the same) throughout the program. It was becoming a program-wide thing to become excellent. It wasn’t just team by team, and I think that helped. We hold our kids to really high standards, and we’re expected to reach our goals and expectations.

What is the one big thing your athletes take away after four years of being part of your program?

We have the mementos and the championship rings and those things. But I think it’s a sense of pride. It gives them a sense of self. They know they can have goals, and if they work hard they can achieve those goals. If they put their minds to something, it’s something they can grasp if they work hard. I think that whole mentality of working hard, pursuing goals and teamwork is instilled right from the get-go, and something they take with them when they leave the program.

How do you stay ahead of the competition?

It’s not easy. We go to several camps; there’s a champion cheerleading camp we go to every summer. We work with college teams too; they come and show us things they do and teach us things. We take some kids every once in a while to out-of-state clinics (Kentucky, Bowling Green, etc.). We really try a diversity of things to get the girls out there and experiencing things. The techniques and ideas, it’s all about seeing something and then adding that to imagination to come up with whatever knows what.

Why are your teams so consistent?

We hold them to high expectations. We have gymnastics classes that they regularly attend, and on their own they go to the gymnastics facility once or twice a week extra on top of that to stay on top of their skills stay among the best athletes in state. One thing we do every year is we create a huge goal board. What we do after we start competing, is every Monday we check off what we’ve completed on the goal board. It’s not just a mental aspect, but it’s visual. Every week focus on something we try to achieve.

What do you enjoy most about coaching?

I love working with the kids. They’re funny. Practice is something new every day; you never know what you’re going to get. It’s so much fun. (And) competing is fun. I like the aspect of competition, the intensity of it. That’s lots of fun too. Winning is fun.

This is the sport Gibraltar Carlson has become known for, the one in which it’s had the most success lately.

It’s starting to grow. People look at cheerleading like, “Oh, it’s cheerleading.” We are definitely gaining the respect of other coaches and other programs, other sports and teachers and the student body. The really cool thing is when people start to look at the sport and realize how physically demanding it is. It makes us feel good to hear when other coaches say they think maybe the cheerleaders might be some of the best athletes in this school. 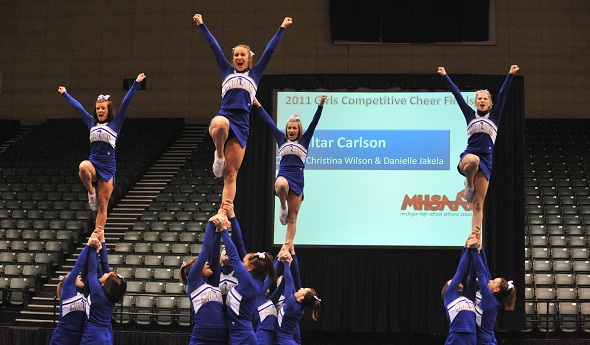