When they were younger, “they weren’t the best,” Millington softball coach Greg Hudie admitted Thursday in recalling the group that became the core of his varsity the last four seasons.

But these Cardinals made themselves into so much more. While all championship teams are memorable, this one will remain unforgettable for what it accomplished this spring.

Millington – after falling just short in finishing Division 3 runner-up a year ago – returned to Michigan State University’s Secchia Stadium two weekends ago and this time left with the school’s first MHSAA championship in any sport.

The MHSAA/Applebee’s “Team of the Month” for June was one of two title winners during the 2018-19 school year – joining the Ypsilanti Lincoln boys basketball team – to win the first Finals championship in school history.

“Just being the first state championship in our school is pretty remarkable,” Hudie said. “No matter how many we have now, it’s pretty cool that everybody will remember it. If it’s 50 years from now, and we have 10 state championships, this was still the first one. And the group of girls we did it with was very awesome as well, very good all-around – academically, athletically, a really tight family team.”

Millington finished 38-2-1 this spring, capping a four-year run at 150-16-1 with four league, District and Regional titles, three Semifinal appearances and this first championship.

The District title won in 2016 actually was the program’s first, and that year’s postseason run to the Semifinals helped set the tone for a freshman class that would become nearly unstoppable by the end of their careers.

Pitcher Gabbie Sherman, catcher Sydney Bishop, infielders McKenna Slough and Hannah Rabideau and outfielders Elizabeth Bees, Leah Denome and Samantha Ayotte all finished as four-year varsity players. Sherman, Bishop, Slough and Denome started the entire way (Rabideau was slated to do the same but was injured that first season). Current juniors Darrien Roberts and Madi Hahn joined the varsity as freshmen in 2017 when the team’s run ended in the Quarterfinals. Shortstop Sabrina Gates earned a starting job as a freshman in 2018 and then-sophomore Neveah Hendricks moved into the outfield as the team came within a 7-6 championship game loss to Coloma from claiming a first title. 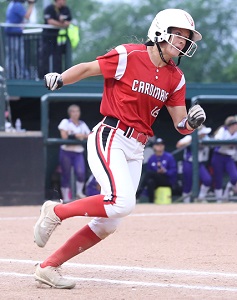 This spring, with all of those players back and freshman Trinity Fessler taking over an outfield spot, Millington blasted through the regular season losing only to eventual Division 1 semifinalist Clarkston and Division 2 semifinalist Eaton Rapids, while defeating back-to-back Division 2 champion Escanaba. The Cardinals outscored their seven postseason opponents by a combined 56-4, closing with an 11-0 shutout of Marine City in the Quarterfinal, 7-1 win over Standish-Sterling in the Semifinal and 8-0 clincher over Schoolcraft in the championship game.

The build-up began long before high school. During elementary, Sherman was the first to start playing higher-level travel ball in the surrounding area. But around the time her class was playing 10-and-under, she and her family decided to play on a team with the other Millington girls – and as the pitcher she was able to carry the load while they were learning the game.

In fact, the team jokingly recalls now how Bishop nearly didn’t make that 10U squad. But Hudie said his catcher has worked harder than anyone he’s coached during a decade leading the program – and by sophomore year she’d earned all-state honorable mention.

This team rewrote the school’s record book, and the home run category is maybe the best example of what these seniors brought to the program. Millington would hit about five home runs a year during Hudie’s first six as coach – then had 44 in 2016, followed by 28, 38 and this spring 48. Bishop broke a decades-old record with 14 homers as a freshman, and Roberts blasted 18 to break the record this spring.

Roberts, Denome, Rabideau, Bishop and Sherman made the Division 3 all-state first team this season. Hahn joined those five on the all-Tri-Valley Conference East first team, with Slough and Gates making the second.

Sherman will continue her career at Kent State, while Denome will play next at Spring Arbor, Rabideau at Mott Community College and Bees at Rochester College. Bishop, who graduated with the GPA over 4.0, had a number of softball scholarship offers and will try to walk on at Oakland University.

“It will be hard to duplicate. Hopefully we can keep it going. … Obviously these girls were paving the way,” Hudie said. “We had a couple of girls before them, had a couple scattered (over more classes), and obviously freshman year they didn’t get to the Semifinal just on their own. But this group kinda showed how to stay together, how to put work in together, and I think that helped the program out most.

“Just showing five or six awesome girls who are willing to put in the time together in the weight room, in the batting cage (what they can accomplish). That really taught our program, our younger girls, and that’s neat.” 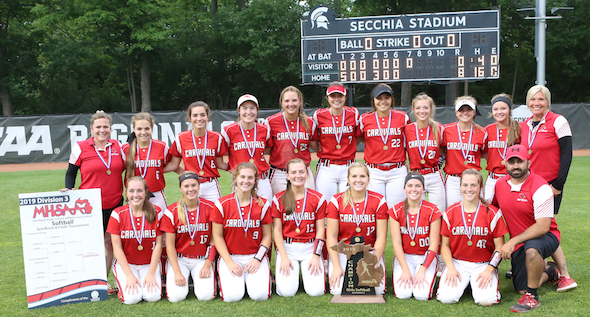 PHOTOS: (Top) Millington’s players raise their first MHSAA Finals championship trophy in school history June 15 at Secchia Stadium. (Middle) The Cardinals’ Leah Denome rounds first base after one of her four hits in the title game. (Below) Millington poses with its trophy and in front of the Secchia scoreboard after its championship win.