Unfortunately for them, they'll have to undertake that frustrating task for one more year.

Beaubien threw only the second perfect game ever in an MHSAA championship softball game, as Monroe St. Mary Catholic Central repeated as Division 3 champion with a 6-0 victory over Grandville Calvin Christian on Saturday at Michigan State University.

The junior star, who committed to the University of Michigan her freshman year, struck out 15 of the 21 batters she faced. She was perfect in 12 innings of the semifinal and championship games this weekend.

"Winning the state championship is just great," Beaubien said. "I can't even describe it. A couple of years ago, nobody would have ever thought our team would be here. Especially winning it back-to-back means a lot. It's a perfect game. That's always good, but it's more important that we win a state championship. I want to give my team the best chance there is to do that. Not letting anyone on base, that works out pretty well."

The only other perfect game in an MHSAA championship game was thrown by Tricia Van Der Slik of Kalamazoo Christian against Saginaw Swan Valley in the 2002 Division 3 Final.

It was the 15th no-hitter ever in an MHSAA Final — and the second of the afternoon on the Secchia Stadium diamond to go with one by Richmond's Erin Shuboy in the Division 2 title game.

"I guess I just knew," Beaubien said. "It's always a perfect game until someone gets a hit or gets on base. I knew no one got on base, because otherwise I'd be thinking, 'They hit it here last time; I'm going to pitch them here.'"

Beaubien will eventually be a Wolverine, but has proven to be extremely comfortable pitching on high school's biggest stage at MSU. In four games on the Spartans' field the last two years, she hasn't allowed a run, has three no-hitters, has given up only two hits and has struck out 58 of 81 batters in 26 innings.

"You've got to be able to perform under pressure," Beaubien said. "I love the pressure. I feel like I can do a really good job in that situation. I just go out and do my best, and it works out."

Although the Kestrels (28-5) had a comfortable lead and nobody got on base, there was still some drama in the seventh inning.

The only time the perfect game was seriously threatened came when Calvin Christian sophomore Sarah Elderkin hit a grounder up the middle with one out in the seventh. Second baseman Peyton Bollenberg backhanded the ball and threw it to first base, where Liz Caldwell stretched out, made the catch and kept her foot on the base to barely beat Elderkin.

"It was a good play by second," Elderkin said. "You always have that feeling like, 'If I could only run harder,' but we had a great game. I feel like we all had some good hits. That team is very good. I think we're just blessed to have the ability to face a team like that. (Beaubien) is very good. She has a bright future ahead of her, I know that. They're a very good all-around team."

The two infielders involved in the play were very much aware that they were trying to protect a perfect game. 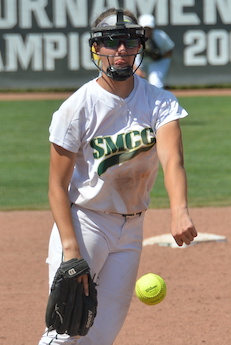 "It looked like Meghan was going to catch it," Bollenberg said. "It was just one of those things where I had a feeling it might come to me. I decided I'm going to go for it. I backhanded it and threw it."

Caldwell had to fully extend to remain on the base.

"All that was going through my mind was, 'You have to stretch, stretch now,'" Caldwell said. "I realized I needed to do my part, hold it and squeeze it."

While six Kestrels were part of last year's championship team, Bollenberg and Caldwell were not.

Bollenberg, a junior, injured her shoulder before the start of last season, so she served as the team's manager.

"I wish I could've played, but God didn't choose that for me," Bollenberg said. "It was definitely exciting to watch the girls do what they do. I knew this was going to be my year."

Caldwell wasn't even on the varsity this year until late in the season. Coach John Morningstar said she was one of four "bubble" players who were kept on the junior varsity to ensure the Kestrels at least had a lower-level team.

"I knew my part," said Caldwell, a sophomore. "I knew I was going to have to cheer on the team and really work people hard. I wasn't expecting to play at all, but I'm just really honored that I got a chance to."

After the bang-bang play at first, there was one more moment of temporary drama, as Calvin Christian’s final batter took the count to 3-1 with two outs. It was only the second three-ball count Beaubien had the entire game. The at bat ended with a swing-and-miss strikeout on a full count.

St. Mary broke a 0-0 tie by producing four straight singles and two runs to begin the bottom of the third inning. Beaubien hit a two-run single through the hole between the first and second basemen to open the scoring.

"The first time I was up, I got out," Beaubien said. "She was pitching me in. I wasn't really prepared for that. I hit a weak liner and got out. My second time up, I knew that's where she was going to throw me. I got my hands inside on that pitch. I pulled it through the other side and got her in."

The Kestrels broke it open with a three-run fifth. Once again, Beaubien was in the middle of the action. She started the rally with a one-out single, scoring on a double by Kenna Garst. Grace Mikesell made it 5-0 with a two-run single up the middle.

It became 6-0 in the sixth when Abbey Johnson scored on an error.

Calvin Christian finished with a 33-11 record.

PHOTOS: (Top) Monroe St. Mary begins to celebrate as the final strike is called of the Division 3 Final. (Middle) Meghan Beaubien unloads another pitch on the way to a perfect game.