GRAND RAPIDS – The return of only two seniors and the addition of a new coach made some wonder if the Gibraltar Carlson competitive cheer team could keep its string of consecutive MHSAA Division 2 titles intact.

The Marauders put those questions to rest by delivering another sterling performance with a squad comprised of mostly underclassmen.

Gibraltar Carlson won its fifth straight MHSAA Finals on Saturday at The DeltaPlex with a three-round total of 784.88.

It prevailed over runner-up DeWitt (778.36), which edged third-place and four-time reigning runner-up Dearborn Divine Child (778.24) by 12 hundredths of a point.

“There was lot of pressure, especially this year because we only had two seniors,” senior Sheridan Skopczynski said. “You don’t want to be the seniors that lose it for everyone, and we had a streak going. We love the pressure and we had a lot of people to prove wrong this year. We pushed through every single day and we knew we could do it.”

The Marauders’ other senior, Kersten Gant, said it was vital to keep the tradition going despite losing several key seniors from a year ago.

“You never want to disappoint the seniors from before, and you always have a reputation to uphold,” she said.

“Everybody really counts on you every year, and the younger girls look up to you.”

First-year coach Aryn Ziesmer took over the reins of the perennial state powerhouse after previously coaching at Southgate Anderson.

“I came from the three-time Division 1 state champions, so I kind of knew going into how to get that out of them,” Ziesmer said. “We won Districts, we won Regionals and this was just another day on a bigger caliber. If you go in as the defending Regional champions it makes your confidence that much higher.”

The addition of a talented freshman group helped propel the Marauders. Eleven freshmen took the floor Saturday for the first time on the biggest stage.

In fact, only three girls had ever competed at the Finals previously.

“Everybody always says how do you do it with 11 freshmen, but they want it with everything they have in them,” Ziesmer said. “Our freshmen are the heart of this team.”

Skopczynski said it took time for the freshmen to become acclimated to a new environment.

“Those freshmen, it took them a month or so to get their confidence up, but once we got it going we were on fire,” she said. “They’re just great and such confident performers. I can’t wait to see what these next three years hold for them.”

Gant has been on the team since she was a freshman. She was overcome with emotion after realizing her senior year would end with another MHSAA Finals crown.

“Oh, it feels great,” Gant said. “This is my fourth title, and I’m so happy that I got to share it with all the freshmen and everyone else. I’m so proud of them.” 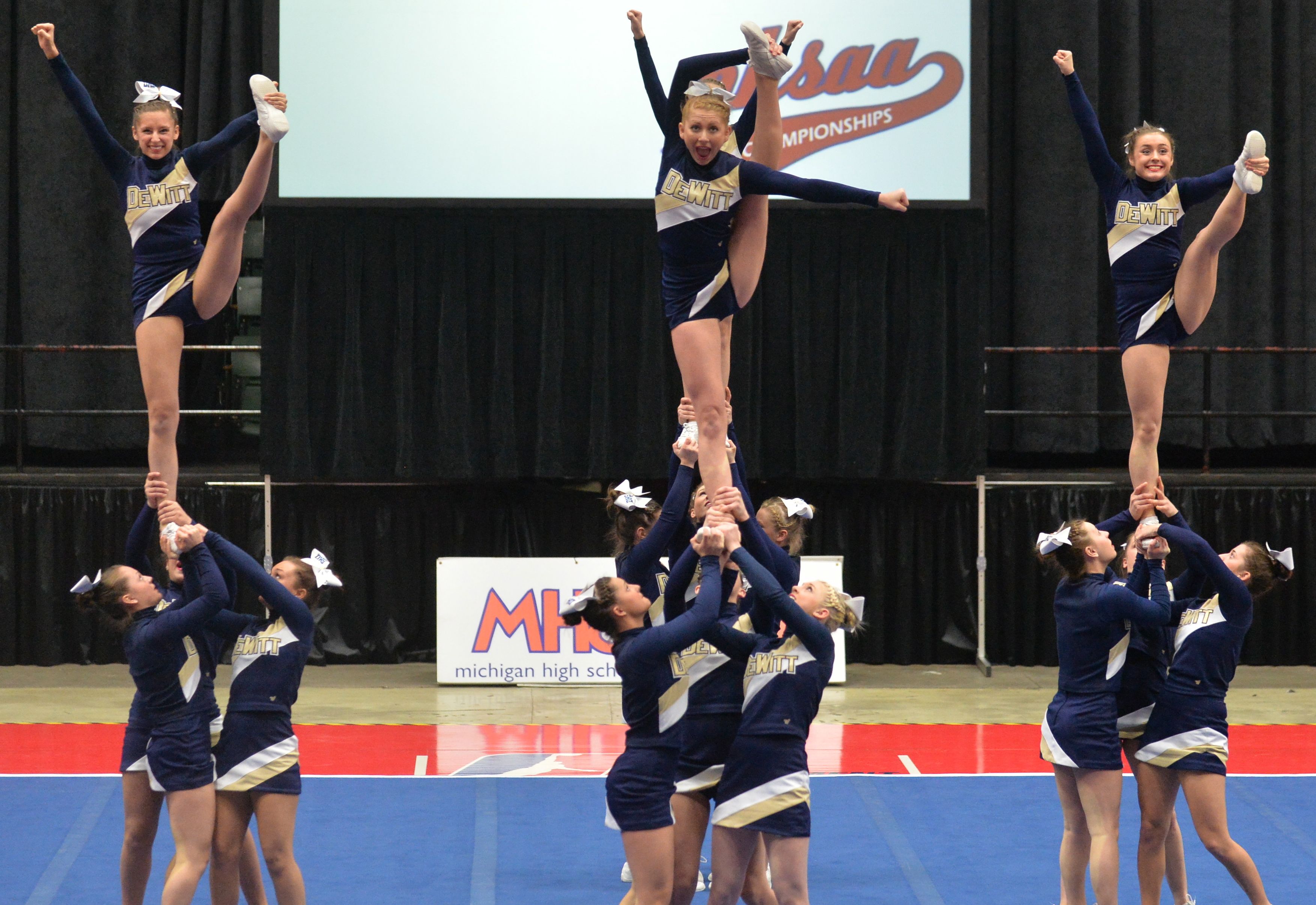 Divine Child was superb in Round 2 and posted a score of 230.64 to close the gap heading into the final round.

Gibraltar Carlson led Divine Child by less than two points entering Round 3, but produced a high score of 319.8 to seal it.

“We have a more difficult Round 3, and we definitely don’t play it safe,” Ziesmer said “There is a lot of room for error, and the fact that they pulled it off was why we were rewarded with such a high score.”

DeWitt pulled off the second-highest score (778.36) in Round 3 to notch its first runner-up finish since 2007.

“Our Round 3 has kind of been our bread and butter all season long,” Panthers coach Candace Heskitt said. “The girls are most comfortable in Round 3, and when they get to do it, that’s their time to shine. They feel at home.”

DeWitt’s roster included only four seniors, but Heskitt said a number of Panthers have been cheering together for many years.

“There’s a core group that have been together for several years, and I think that brings a strength to the team that we have not always had,” she said. “These girls work so hard and they’ve worked hard as a group, which has made it that sweeter.

“Obviously, everybody here is chasing first place and a state title, but before we took the floor the one thing I said was, ‘I want you to walk off the floor feeling like you did your best and had an amazing day’, and that took priority. The girls did a great job.”

PHOTOS: (Top) Gibraltar Carlson performs its routine during Round 3 of Saturday's Division 2 Final. (Middle) DeWitt also competes in Round 3 on the way to finishing runner-up at the Grand Rapids DeltaPlex.