FARMINGTON HILLS – Like a lot of seniors, Jess Mruzik of Farmington Hills Mercy will enjoy a lot of perks that come with the final year of high school.

The first such perk will be that she will get to miss almost three weeks from late August to mid-September.

A member of the United States Under-18 Girls Youth National volleyball team, Mruzik and the rest of the U.S. squad will be heading to Egypt from Sept. 5-14 to compete at the World Championships.

Mruzik actually will head first to Anaheim, Calif., on Aug. 28 for a couple of days of training before the team flies over to Cairo.

But don’t worry, there will still be a way for her to keep up with what’s going on in her classrooms at Mercy.

“A lot of our stuff for where we turn in our homework, that’s all online,” she said. “So it should be pretty easy for me to keep up.”

But if Mruzik has her way and achieves all that she wants, getting to represent her country and go for a gold medal won’t be the only perk she’ll enjoy over the coming months.

There are rightfully a lot of expectations for Mercy on the volleyball court, since the Marlins return nine players from last year’s team that finished 52-3 and reached the Division 1 Semifinals before falling to eventual champion Lake Orion.

Leading the way will be Mruzik, who is almost like having nine returning players all in one.

“Obviously the national team will be fun playing with girls all across the country, but I’m really excited for this high school season,” Mruzik said. “Everybody is so much better. We are all super hungry this year.”

Having the wondrously talented Mruzik already is a boon for Mercy. But add that she and the rest of the team are beyond motivated to bring home the first volleyball title in school history, and that’s a bad outlook for opponents.

A 6-foot-2 outside hitter who brings thunder from all sides of the net, Mruzik was named the state’s Gatorade Player of the Year last year after collecting 420 kills, a .514 kill percentage, 165 digs and 65 aces.

Mruzik comes from a basketball family but found out her gifts were in volleyball after taking up the sport in fourth grade. She already has built up a diverse volleyball resume with her experiences on the world, national, club and high school stages. 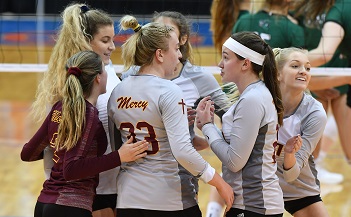 Mruzik last year captained the national team that won a gold medal at the NORCECA Continental Championships in Honduras, and she was named MVP of the tournament.

“People really take volleyball serious overseas,” Mruzik said. “Playing with Team USA, you get a taste of that. It’s not the club world. These people are playing for money and will do whatever it takes to win. A lot of times in club, you play the same people over and over again. You know how one girl is going to play and how one team is going to play. Internationally, you have to make changes on the fly because they play volleyball differently than you.”

Vogel said she first saw Mruzik at one of the coach’s camps. But after seeing her perform so well at the camp, Vogel was disappointed to learn that Mruzik was still in eighth grade at the time and not an incoming freshman.

Vogel has seen Mruzik get better and better during her first three years at Mercy.

“She had a very complete package for a young lady,” Vogel said. “But I think the strength of her game each year when she comes back to me in the fall, everything she does is stronger. Her attacking is stronger and very precise on everything she wants to do.”

Mruzik will be graduating early, in December, and will attempt to enroll at University of Michigan in January.

If she can’t enroll early – the university can take only a limited number of athletes who wish to do so – she’ll take classes at a community college and start training with her future Michigan teammates.

Even with her national team opportunities, Mruzik loves the high school experience too much to not play her final season, even adding that if Mercy had won the Division 1 championship last year she still would have come back to play high school as a senior.

“High school season is a fun time of the year,” Mruzik said. “I’m super close with the girls on our team, and we all mesh really well. That’s definitely something that helps, and there’s not a lot of team drama.”