BATTLE CREEK — Most softball teams ride one dominant pitcher and hope for the best.

It never hurts to have an insurance policy, however, because even the best pitchers have an off day.

Splitting the pitching duties between two girls all season paid off for Kalamazoo Christian on Saturday in a 16-6 victory over Ubly in the MHSAA Division 4 championship game at Bailey Park.

When Ubly’s first seven batters reached base in a six-run third inning, senior Stephanie VanderLugt was pulled in favor of junior Bekah VanDam.

It was hardly a desperate move for the top-ranked Comets.

VanDam didn’t allow a run in four innings, giving up three hits and striking out three.

“I went with Stephanie because it was one game at a time, and we went with her strengths over Bekah’s,” Kalamazoo Christian coach Karla Reno said. “I had to make a decision between the two. Bekah knew her job was to be ready to go in on relief if needed, and go in and throw hard and throw low. That’s exactly what she did.” 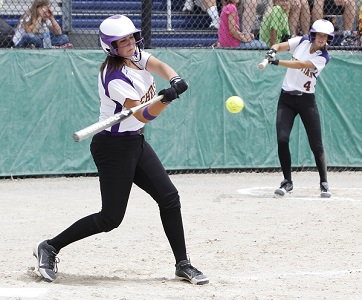 While both players are accustomed to pitching regularly, one rarely has to relieve the other. VanDam was playing third base when she got the call to enter the pitching circle.

“It’s unexpected, for sure, but I came in ready to go,” VanDam said. “My adrenaline was going. Normally either one of us is on; she struggled.”

If VanderLugt was upset about her pitching performance, she didn’t let it show when she came to the plate. She finished 2-for-3 with four RBI, including a two-run single that broke a 6-6 tie in the bottom of the third. She finished with a team-high 46 RBI.

“I knew Bekah could do it,” VanderLugt said. “I knew she’s tough.

“I had to get that out of my mind, because if that stayed with me, I never would’ve performed well. I had to suck it up for the team.”

That’s usually an insurmountable lead in championship softball, but Ubly stormed back with six runs in the third, tying the game on a two-run single by Hailey Kubacki. VanDam entered after Kubacki’s hit, retiring three in a row to end the inning.

“Nerves took over right away, and you could tell that,” Ubly coach Courtney Dekoski said. “The girls never lie down. I couldn’t be more proud of each and every one of them.”

Kalamazoo Christian took the lead for good with three runs in the third inning. The Comets scored twice in the fifth and ended the game via the 10-run mercy rule with five in the sixth. A sacrifice fly by VanderLugt scored the final run.

Kalamazoo Christian’s run total is the second-most in an MHSAA Final and the 22 combined runs also rank second. Both marks were set in Byron’s 17-10 victory over Kalamazoo Christian in the 1976 Class C title game.

“It was crazy,” VanderLugt said. “They took advantage of what we did wrong, and we did the same for them. I give them a lot of credit for battling when we got up so early.”

Tori Sides was 3-for-5 and scored three runs for the Comets (33-7). Kara Gjeltema and McKena Razenberg were both 2-for-4 with two RBI.

Kubacki was 2-for-2 with two RBI for Ubly, which hadn’t won a Regional until this season.

PHOTOS: (Top) A Kalamazoo Christian runner slides into third base during her team's 16-6 victory. (Middle) Comets hitter Bekah VanDam prepares to make contact with a pitch while teammate McKena Razenberg (4) warms up in the on-deck circle. (Click to see more from Hockey Weekly Action Photos.)