When Kris Hubbard was asked to coach the fledgling Ottawa Lake Whiteford softball team in the late 1970s, the first person she went to for advice was her neighbor, Kay Johnson.

Johnson, who already had been coaching the Morenci softball team for about five years, wrote down a couple of pages worth of tips, from offensive situations for practice to drills for outfielders. Those golden rules given from one friend to another helped build the foundation for Hubbard’s career that has spanned 40 years, more than 800 wins and three MHSAA Finals championships.

“I wanted to start a softball program and I said to her, ‘Okay, what do I need to do?’” Hubbard recalls. “I think I still have it. It was a pretty good list.”

“I got her started,” Johnson said. “I don’t know that I taught her a lot.”

Johnson graduated from Whitmer High School in Toledo in 1968 and Adrian College in 1972. She lived in Sylvania, Ohio, only a couple of miles from Whiteford High School, and accepted a teaching and coaching job at Morenci. She coached volleyball, basketball, softball and track. Her 1976 Bulldogs track & field team won the Lower Peninsula Class D championship.

Hubbard grew up in Blissfield and played college basketball at Western Michigan University, graduating in 1973. After college she accepted a teaching job at Whiteford and early on was coaching track, volleyball and basketball for the Bobcats. After the 1978 track season, Hubbard stepped down as head coach for that team. It was then that some of the Whiteford girls came to her and asked if she would be interested in coaching them in a new sport at the school – softball.

“I had played fast-pitch softball, but I didn’t know all of the little things kids needed to know,” Hubbard said. “That’s why I went to her.”

Johnson and Hubbard had met a few years earlier when Johnson was playing on a Toledo city league recreation basketball team. Her team needed more players and her uncle told her about Hubbard, who, come to find out, was a distant relative. The two didn’t know each other, but they lived about a long fly ball from each other at the Michigan-Ohio border.

“My mom’s brother was married to her grandma’s sister,” Johnson said. “We didn’t know each other. I was at Thanksgiving and my uncle said I should call her for the basketball team.”

They’ve been more than just rivals in different dugouts. When Hubbard was getting married in the 1980s, she moved in with Johnson after her house sold. For years they have traveled to softball coaching clinics together, even making a presentation on softball drills at least once. This past winter they vacationed together.

Hubbard had never coached softball but was a fast learner. Her first three Bobcats teams won Tri-County Conference championships from 1979-81. In 1984, the Bobcats won their first of three Class D championships over the next four years.

Ironically, only one of those state title teams won a league championship. That’s because Tri-County Conference opponent Summerfield won the Class C title in 1984 and Johnson’s Morenci team won Class C titles in 1985 and 1986.

The league has been a softball powerhouse from the start. Since 1984, Summerfield and Whiteford have three MHSAA Finals titles each and Morenci and Clinton two apiece. Numerous TCC teams have reached the Semifinals or played in championship games. Whiteford, for example, played in the 2017 Division 4 Final and Morenci in the 2016 Semifinals.

“There have been some good coaches in the TCC, and I’m not talking about us,” Hubbard said.

The league has also been home to some tremendous talent. Summerfield’s Michelle Bolster played at Indiana University. Whiteford’s Leigh Ross was an All-American at the University of Toledo, later coached at Syracuse and is now a softball analyst for ESPN and the Big Ten Network. Morenci pitcher Renae Merillat was an All-American at Hillsdale College. Summerfield’s Melissa Taylor claimed the statewide Miss Softball Award as the top position player in 1997. 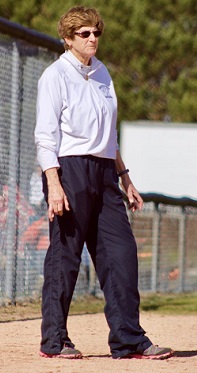 Johnson entered 2018 with 889 career victories, Hubbard with 813, putting them both near the top of the MHSAA softball coaching wins list. Johnson has more than any softball coach in Lenawee County history, while Hubbard passed Monroe’s Vince Rossi last year to become the winningest softball coach in Monroe County history. This year, both teams are in a loaded Division 4 District that includes Britton Deerfield, Summerfield and Sand Creek.

“There have been times where the District is tougher than Regional,” Hubbard said.

Johnson said both she and Hubbard have the same philosophy when it comes to the regular season – throw out the records and build a team that can contend for an MHSAA championship.

“Our league prepares us for the District tournament,” she said. “We both put teams on our schedule that are going to challenge us. I’d rather lose 3-1 then win 15-0. Winning 15-0 does nothing. It doesn’t teach anything.”

Morenci was a member of the Lenawee County Athletic Association before joining the TCC in the early 1980s. That meant the two friends would be coaching against each other at least twice a year.

It’s no accident the two have similar coaching styles and strategy when it comes to developing pitchers, bunting at key situations in a game and advancing runners.

“We talk about softball a lot, just not about playing each other. That’s not exactly fun,” Hubbard said. “I think we are both pretty laid back. To coach as long as we have, you have to be.”

The game has changed over the years – the ball itself is much different than it was in the 1970s and 1980s. The home run was rare 20 years ago but is now part of the game, something Johnson isn’t thrilled about.

“I hate the home run in fast-pitch,” she said. “I want doubles, triples and relays from the outfield. I want action. You work your defense. I want them to be able to show off. The bats have really livened up the game.”

Hubbard wants to coach the Bobcats at least one more year after this season. This spring her team has seven players back, including its top pitcher, from last year’s runner-up finish. Most are only juniors. She smiles easily when talking about ex-players and their after-school successes.

“I love Facebook for one reason – you get to follow a lot of your former athletes,” she said. “There’s a whole lot of them who are really successful in life. That’s what it is all about. It’s a game. Softball is just a game. It’s (a small part) of your life. If you turn out all right, that’s what it is about.”

Johnson used to identify pitching prospects while teaching physical education at Morenci. She was later a principal and now is athletic director at Morenci along with softball coach.

“It’s sustained over the years,” Johnson said of the program. “We’ve had our low years. One year we only won five games. But, program-wise, year-in and year-out, we bring out the quality kids. They know the expectations. They have a high grade-point average. When you are getting those quality kids out, you know they are going to give you a good effort.”

Johnson and Hubbard will square off this season May 22 in a doubleheader at Whiteford. Before the game, which will be the 106th and 107th meetings between the two all-time, Hubbard will put a Snapple in the dugout for Johnson. Neither coach is interested in knowing who has the upper hand when it comes to the head-to-head series.

“You don’t get real fired up about it,” Hubbard said. “For those two hours I want to kick her butt and she wants to kick mine. We are going to be friends no matter what.”