ESCANABA – A new coach is at the helm, but the tradition of excellent volleyball has carried on at Calumet High School.

The Copper Kings (27-6-2) are ranked sixth in the Class C state coaches poll this week as Matt Laho has added to the success established over the past 20 years by Lisa Twardzik. Calumet was Class C runner-up in 2008, a semifinalist in 2007 and 2016 and has won the past five Regional titles.

Calumet is the heart of a powerful volleyball program in the Copper Country, the northern-most region of the state. "We're not at the hockey status, but in the fall volleyball is a pretty big deal," said veteran Houghton volleyball coach John Christianson.

"Volleyball has become the in thing to do at schools up this way."

The two programs set the pace throughout the Upper Peninsula. They met recently with Calumet taking the decisive fifth match 15-11, and they meet again Tuesday at Houghton. They will also play in the Houghton tournament Saturday.

Laho, an assistant to Twardzik last year after spending several coaching and teaching in Wyoming after his graduation from Finlandia University, has put some of his own touches into the program while building on the foundation established by Twardzik.

"I soaked up as much as I can. She built Calumet into a volleyball powerhouse, and I want to continue that and try to keep that tradition alive," the Calumet fifth grade teacher said of trying to fill Twardzik's huge shoes.

He runs a middle-middle defense but said the emphasis is in different areas. "I have principles and philosophies and I build offense and defense systems around the players," Laho added. 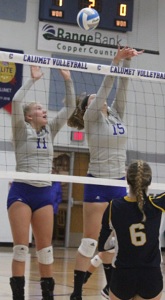 "Lisa always did a great job focusing on positive reinforcement. I do that too, but then I tell them here is where we go next," he said. His approach "lets them know things will be different. I let players know I will be open-minded."

Laho said the team's strong suits are ball control, transition passing, defense and serving. "Our attacking, while not a weakness, can be more effective," he said.
Laho prefers everything "to be as simple as possible. I want things to become natural rather than to think about it on the floor."

Meanwhile, he takes a technical approach and gets a lot of individual feedback. "I have given them tiny tweaks to help them get better," he said.

"One thing they are noted for is defense, extremely disciplined defense," said Christianson. "Trying to find holes in their defense is difficult. And they are fundamentally really, really sound. They play with a mental focus, and they focus on the task at hand. And they have been blessed with some big, athletic girls, competitive girls."

A key player has been senior power hitter Lea Bjorn, "your prototypical hard-working athlete," said Laho. "She is a six-rotation player."

That group is following in the footsteps made by current Northern Michigan University spikers Janie Torola and Hailey Wickstrom.

This is also a tough team for opponents to dislike. "Their players are really nice people," said Christianson. "Their parents have raised them to be really nice ladies. It is a very good program with very good people."

Their reputation has spread across the Upper Peninsula and downstate as well.

"No doubt any place they go in the U.P., they are the standard bearer," said Christianson. "They set the bar, and the rest of us try to get there."