EAST LANSING — The softball coaches at Unionville-Sebewaing don't need to waste much time talking about tradition to their incoming players.

Nearly every athlete who comes into the program has already witnessed that tradition first-hand.

Many of the current players watched from the stands at Bailey Park in Battle Creek while the Patriots competed in MHSAA semifinal and championship games. As young girls, they idolized the teenagers who wore the red, white and blue of Unionville-Sebewaing.

Just as some young girls currently look up to junior Nicole Bauer, who pitched a one-hit shutout in a 5-0 victory over Kalamazoo Christian in the MHSAA Division 4 championship game Saturday at Michigan State University.

"I was just so in awe of them and how great they were," Bauer recalls of her early impressions of Unionville-Sebewaing softball. "I just knew I wanted to be on that field some day."

Recalling their own childhoods, the Patriots (38-3) were mindful of the likelihood that future Unionville-Sebewaing stars were watching from the stands at Secchia Stadium on Saturday.

"Before the game, our speech was 'Play for that little girl that we were that was sitting in the stands just like the little girls are here today,'" Bauer said.

And, thus, tradition is handed down from one class to another.

"One of the things I'm proud of is all of these girls are homegrown USA kids," Patriots coach Steve Bohn said. "It's like the Yankees. Hey, we win championships. When you go there, you know that's the expectation. That's the expectation they have, because that's all they've seen. Everybody's worried about being the one team that doesn't get here. Nobody wants to be that team."

For all of the Patriots' success, none of the current players had won an MHSAA championship — until Saturday.

"I came down to Battle Creek to watch them play, watch them win and sometimes fall short," senior third baseman Madison Zimmer said. "I was really determined to get another state championship." 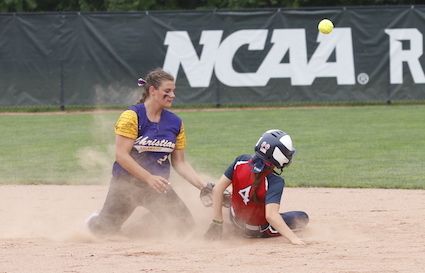 It was a title game that oozed with tradition, as the Patriots' opponent was a Kalamazoo Christian squad trying to match the record for MHSAA softball championships. The Comets have seven titles, one fewer than Waterford Our Lady.

"These girls are JV kids playing varsity," Comets coach Terry Reynolds said. "Coming here and playing in the semifinals and state championship, it shows the girls what they can do. We got here. Now we've got to do something about it. We're already talking about next year. This group wants to be back next year. They'll be stronger and work harder."

The Comets couldn't solve Bauer, who allowed only one base runner. Aliyah Lemmer led off the fifth inning with a single after the first 12 batters were retired in order. After that, Bauer got the final nine batters in a row, striking out Lemmer to clinch the championship.

"I felt very confident," Bauer said. "I knew if I kept it in the field that my players would make outs for me."

The Patriots scored their five runs with a three-run fourth inning and a two-run fifth.

Zimmer lined the first pitch she saw for a two-run double to left-center field to open the scoring in the fourth. After going to third on a wild pitch, Zimmer scored on a sacrifice fly to center by Katie Engelhardt.

"It was huge, because we had runners on and we needed to get them in," Zimmer said of her double. "Nicky did a great job. She held them until we could hit; that really helped."

The Patriots built their lead to 5-0 when Bauer lined a two-run single to left with two outs in the fifth.

"We didn't have a lot of opportunities," Bohn said. "We didn't swing the bats real well. That hit Maddie Zimmer got, that first one you get across the plate, especially the way Nicky was throwing, that's huge. That's the one hit we had to get. That loosens everybody up, and the other ones start to happen."