But No. 1 in the regular-season rankings doesn’t mean much compared to number nine in the record book.

St. Philip, ranked No. 3 in Class D at the start of the postseason, defeated No. 2 Mendon in a Quarterfinal and then top-ranked Leland in Saturday’s Final 25-18, 25-18, 23-25, 25-17 to claim a record ninth consecutive MHSAA championship. The Tigers had entered this fall tied with the Marysville teams of 1997-2004 for the longest title streak in MHSAA volleyball history.

“Growing up and watching them, it was always great to say ‘I want to be out there one day.’ And just having that experience, being around that all my life, has pushed me harder to want to be like that,” Schaub said. “Going out there and doing that, … it feels good to prove we’re just as good as the other teams. Just to show we’re a great program, even when considered in a rebuilding year, just to show we’re still a fighting team and we’re here to stay.”

In 40 seasons of MHSAA volleyball, St. Philip has made the Semifinals 32 times, played in 28 championship games and won 20.

The eighth-straight title last season meant something personally to St. Philip coach Vicky Groat, who took over the program from her late mother Sheila Guerra and tied her mom’s career total of nine championships won.

But Saturday’s crowning victory will serve as one of the brightest points of pride for a community that turned out again to celebrate success.

“Ask every single one of these girls if they were in the stands for championship runs or Final Fours. They were in the stands watching, and they want to be part of that team,” Groat said. “That’s what it is. These kids, they have that. They want to play for St. Phil. They want that experience. As a coach, I want to make sure to give every single one of my kids who play for me the chance at a Final Four or to play for a championship.”

And, as Groat added, there was something to be said of claiming number nine “with this group of girls.” 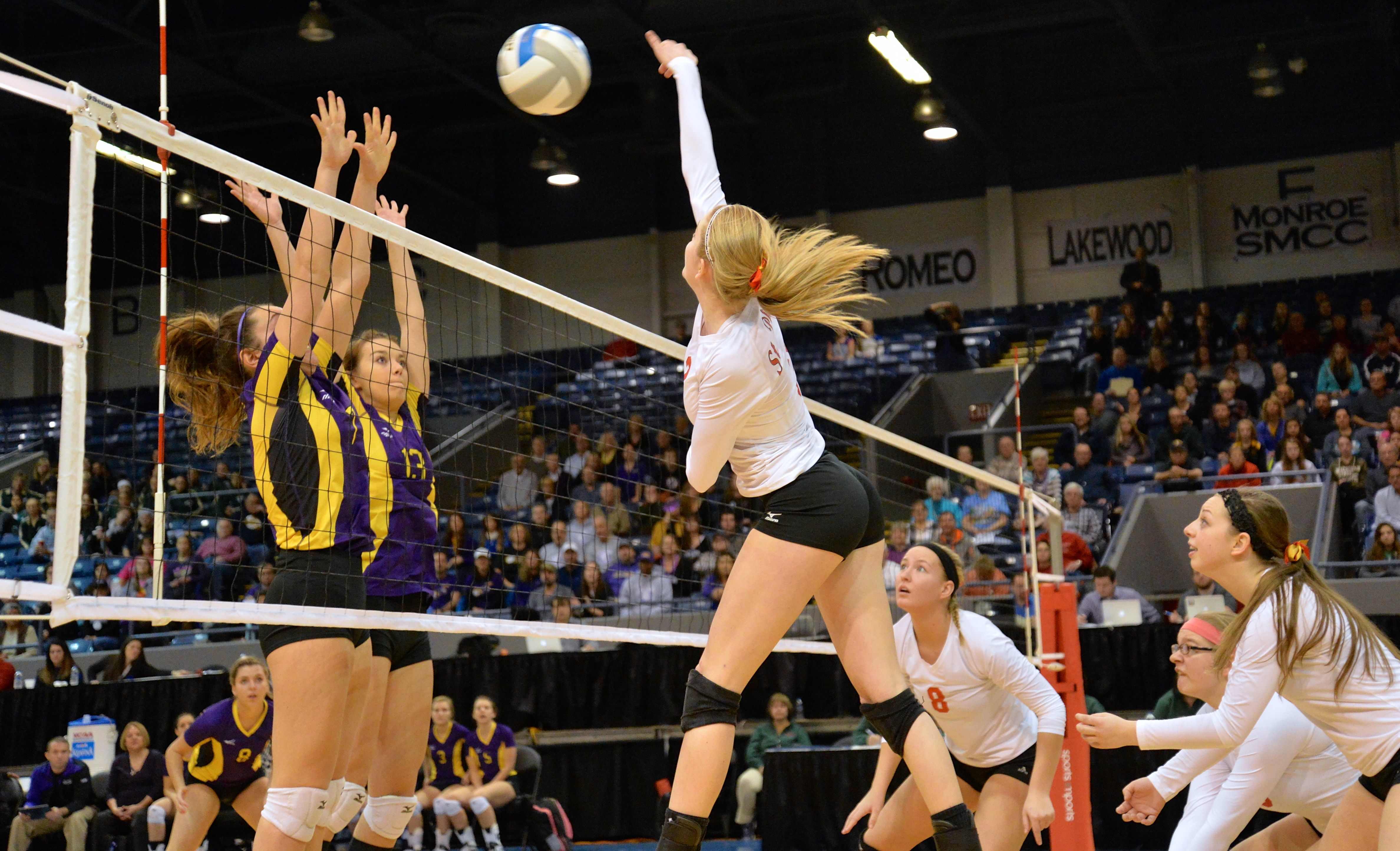 The Tigers this season had only two hitters who saw time in the 2013 Final, when Hubbard-Neil had 19 of the team’s 31 kills.

But on Saturday, junior Abby McKinzie had 13 kills and senior Megan Parker added 12 as seven St. Philip players scored. Schaub had 32 assists and was one of five with at least 14 digs – sophomore libero Kameron Haley led with 21, tied for 11th most in an MHSAA Final during the rally scoring era that began in 2004-05.

St. Philip claimed the first two sets before Leland stormed back in the third. The Comets played the Tigers to 15-15 in the fourth set before St. Philip ended on a 10-2 run.

“She is one of the best coaches I’ve ever had in my life, and to be able top get this record for her is unexplainable,” McKinzie said of Groat. “I’m so happy to have won it for her.”

It came against a program that could be considered a distant part of the St. Phil family. Leland coach Laurie Glass coached against Guerra, and Glass’ players stay with Groat each year when they play in the Tigers’ tournament. Groat’s players stay with Glass each summer during the Comets’ camp.

Leland certainly had the Tigers wary of a comeback. Leland had fallen in its first Semifinal set to Onaway before winning the next two, losing the fourth and then shutting out Onaway 15-0 in the decider.

When Groat and Glass crossed paths after Leland claimed the third set, Groat did mutter a little something about a possible repeat of Thursday.

“We were certainly hoping to give her another run at that time, at least make it go to a fifth,” Glass said. “I thought they really started serving really well at that time (in the fourth), we started making passing errors and got a little tighter. We made a couple hitting errors, unforced errors on our part that gave them the momentum for that 3-4 point swing that put them ahead.”

Junior Maddie Trumbull led the Comets with 16 kills, and senior Jessica Fleis had 37 assists. Senior Miranda Harrison’s 24 digs ranked sixth for an MHSAA Final. The Comets' runner-up finish was their best since 2006, and they finished 43-13-4.

St. Philip finished 53-12-4, with a few more losses than the last couple of seasons. The Tigers finished 1-3 at the Rockford Invitational on Oct. 25, but that day Groat saw a championship-level surge beginning to build.

“At the start of the season, we were doubtful. Ask every single (player), we were doubtful,” Groat said. “(We thought) we’re going to have to do our best as coaches, but it’s not only coaching. It’s players, and they bought into it.

"They believed they could do it, and the power of believing is awesome.”