EAST LANSING – Indian River Inland Lakes didn’t want to leave Michigan State with that same feeling it had a year ago after falling 1-0 to Unionville-Sebewaing in the Division 4 Final.

This time around, the Bulldogs (35-5) combined extra-base power with more solid pitching to claim the school’s first MHSAA softball title with an 8-0 victory over Ottawa Lake Whiteford on Saturday.

“I voted her all-state in our division for a reason; she just kept us off-balanced,’’ said Ottawa Lake Whiteford coach Kris Hubbard. “They had the experience. They’re a junior-senior laden team. We’re seven sophomores. She controlled us, and I think we had a little bit of sophomore-itis.”

Mallory (who will continue at Central Michigan) handcuffed the Bobcats with 12 strikeouts and never pitched in a stressful situation. Left-fielder Sydney DePauw had three hits and scored two runs to pace the offense.

“It definitely was motivation all year, losing in the Finals last year, 1-0, gave us the motivation to get back here this year,” Mallory said. “I mixed up my pitches and mostly threw rise balls. Moving left to right.

“It means so much. Just in the past three years. You see it in the little children. You can see we’re going to have some good players come through the program, and it all started here.’’

Added coach Krissi Thompson: “To come so close so many times. … Even through Little League they got so close but just came up a little short. We wanted to put an exclamation point on it this year. We put up 460-some runs against our opponents, who scored just 65. These girls have busted their butts all year.’’

The Bulldogs put together their first threat Saturday in the third inning when Makayla Henckel walked and DePauw singled her to third.

Henckel scored on a wild pitch and Precious Delos Santos singled in another run to make it 2-0. 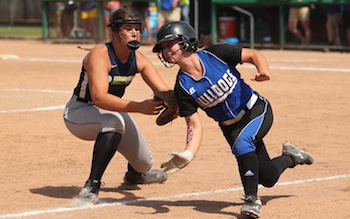 Mallory was hit by a pitch with two out, and cleanup hitter Vanessa Wandrie came through with a run-scoring single to make it 3-0 at the end of three. The Bulldogs tacked on another run when DePauw led off the fifth inning with a double and scored on an error.

Inland Lakes then blew it open in the sixth inning.

Henckel tripled to score a run, and DePauw and Braund followed with run-scoring doubles into the center field gap to open up a 7-0 lead. Delos Santos came through with a run-scoring single to make it 8-0, and redemption was all but complete with only the final three outs left to get.

“Oh my God, it felt so good to hit the ball,’’ said DePauw. “(Friday) we did pretty well, but to come out and just put it on them.

“We lost 1-0 last year, and to come back and just open it up like that was great. We came back with a vengeance. We played really hard last year, but we didn’t want to go out like that. We wanted to get it this year. Cloe is awesome. I can’t say enough about her and the team. We are family.’’

Whiteford, playing in its first Final since 1994 after also making the Quarterfinals last spring, ended at 33-7.

“We’ve had a great season,” Hubbard said. “I started seven freshmen last year, and we went a little further this year. Hopefully, we can get back here again.’’

PHOTOS: (Top) Inland Lakes raises its first softball championship trophy Saturday. (Middle) A Bulldogs runner is tagged out trying to get back to third base.