ROCKFORD – One by one, teammates hugged Rachel Hogan, while her coach Duane Haring placed medals around the necks of the other placers and worked to keep himself together.

Before this weekend, nine Grand Ledge gymnasts had combined to win 13 all-around MHSAA Finals championships. A few won multiple titles, and one finished first in both Division 2 and Division 1.

Hogan's path was different and all her own, a mix of just-misses and domination leading to her becoming the Comets' next winner.

She finished 10th in Division 1 as a freshman, a point off the lead, then improved to second as a sophomore, finishing only a tenth of a point behind the champion. Hogan fell back to third last season, but just 0.375 points back.

Saturday’s performance included a fall on balance beam and a ninth place on floor exercise. But it also included first places on vault and uneven bars – Hogan’s sixth and seventh Finals event championships over her four seasons – and this time she rose to the top of the podium at the end of the day as well, with an all-round score of 38.000 to win Division 1 by five hundredths of a point.

“For my senior year, I really just wanted to do the best I could,” Hogan said. “It’s my last year, and I know that, so I want to just put it all out there and give it all I’ve got. So I guess there was a little more of a drive, a little more of a want to get it.

“I really hope every girl here leaves feeling that they did their best. I feel that way too; that’s a great feeling.”

Hogan’s individual titles over the last four seasons included three on vault and two each on floor and bars. She tied the Division 1 Finals record with a 9.800 floor exercise as a freshman in 2013, but needed one more record performance to claim her all-around championship. 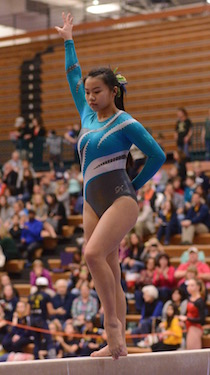 The growing cheers with every attempt told the entire Rockford gym that Hogan was shining on vault Saturday. And her final attempt earned a score of 9.875, five hundredths of a point better than Grand Ledge’s Alexis Byington scored to set the previous record in 2010.

“She’s just a class act all the way around,” Grand Ledge coach Duane Haring said. “She’s always been determined, but she’s so nice (that) when she first started, she didn’t want to beat anybody else. Because she felt bad. Over the years I said, ‘It’s OK. They’re trying to beat you. You’re still friends. It’s called sports. It’s competition. You need to try to beat them.’

“So then, she started to get a little more aggressive, and said, ‘Yeah, maybe I do want to see if I can be on top.’”

Nguyen was runner-up to Rockford/Sparta’s Morgan Korf last season, finishing only 0.075 of a point behind. Her second-place score of 37.950 on Saturday was only 0.050 off the lead.

Nguyen also had the second-highest all-around of Friday’s Team Final, behind only Hogan, and Saturday finished second on bars and beam and fifth on floor.

“I’m pumped. I want to get new skills and work harder this summer,” Nguyen said. “I’m still happy I stayed second the whole time. (On) bars, even though she beat me by 0.025, I was still happy with my score (9.675). And beam, yesterday at Team (Finals) I fell, and I wanted to stay on beam today, and I had a good save today.”

Hogan and Nguyen’s respective finishes were especially impressive given the loaded field in Division 1. Korf finished fifth this time after helping the Rams to the team title Friday, and junior teammate Nicole Coughlin – the leading all-around scorer for Rockford/Sparta on Friday – improved three spots from last season’s Individual Finals to tie for third with Brighton senior Margo Mekjian. Coughlin won beam with a 9.650, and Mekjian won floor with a 9.600. 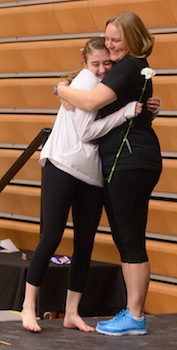 Livonia Blue senior Brianna Rhoad also ended her career on top at these Finals, winning Division 2 after finishing sixth as a junior, 15th as a sophomore and seventh as a freshman.

Rhoad’s all-around score of 36.525 placed her three tenths of a point ahead of Farmington sophomore Elisa Bills. Rhoad didn’t finish first on any apparatus, but was at least eighth on all four.

“I was nervous, but after I had a pretty good beam and floor I thought I could finish it off well,” Rhoad said. “I think last year I just had a rough meet, so I think I had a better meet this year.”