But repeating at Friday night’s Team Final put the finishing touch on a dominating run that left no doubt which was the state’s best again this winter.

Compared to 2018, when Farmington ended Rockford’s three-season hold on the title and the top three teams were separated by three tenths of a point, this finish was a bit more comfortable.

Farmington – which won all of its meets this season – clinched the title this time with a score of 145.550, 1.3 points better than the runner-up Rams.

“It was actually more fun this year because we didn’t feel (like) as much of an underdog,” Farmington senior Kacey Noseworthy said. “We were coming in here confident, and we could believe it. But there was more pressure knowing that we kinda were expected to win.”

Farmington United – made up of gymnasts from Farmington High, North Farmington and Farmington Hills Harrison – posted the Final’s highest scores in the vault (37.700), the second highest on floor exercise (37.575), tied for the second-highest on balance beam (35.500) and then third highest on uneven parallel bars (34.775). After Rockford/Sparta, the next closest team was more than three points off the lead. 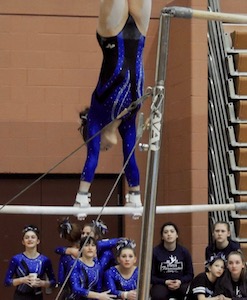 The margin was slimmer after Farmington finished its second rotation of the afternoon. But vault provided an opportunity to make a move – and longtime coach Jeff Dwyer’s gymnasts let their best fly.

Junior Elena Vargo threw a vault with a max score of 10.0, and she scored 9.80. Sophomore Sydney Schultz went with a vault she learned just two weeks ago with a max of 9.80, and she posted a 9.50.

“Vault is kinda a wild card. It’s one you sometimes hit and sometimes don’t,” said senior Ava Farquhar, who posted a 9.050 on the apparatus. “It’s hard, depending on the situation, the gym and the equipment. Going in, we all just tried our best. Warm-ups turned out pretty well, so we got a little excited.”

“You’ve gotta have a pretty unique group of girls who can do it two years in a row,” Dwyer said. “And you can sense that, how they compete and how they work out in the gym. So I knew we had a shot again this year. But these (Finals) are hard to win.”

Plymouth followed Rockford/Sparta in third place, an improvement of three places from a year ago. First-time Finals qualifier Fowlerville finished fourth, and Livonia Blue edged Northville to round out the top five. 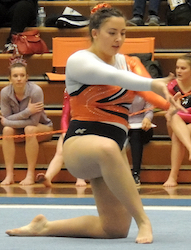 “Farmington’s been like steady beating us the whole year, so we kinda thought we would get second with maybe a tiny chance at first,” said Case, a contributor on the 2017 championship team and last year’s runner-up as well. “But we’re really happy with what we did.”

The Individual Finals in both divisions begin at noon Saturday, and in addition to the championship Farmington United also might have won Dwyer his first good night’s sleep in a few days.

He said he hadn’t slept for three nights heading into Friday’s competition. But his gymnasts stepped up to the pressure of being the favorites with a perfect season on the line, taking the pressure off with an opportunity to sweep the individual titles up next.

“I think it just shows a testament, one, to our coaches; and two, to the family that we’ve made,” Farquhar said. “This sport is about making friendship, and your team really is a big part of it because it’s so mental. And I think our team put together a great team this year.”