GRAND RAPIDS – Gibraltar Carlson senior Annie Hajec was in an unfamiliar place Saturday afternoon during the MHSAA Division 2 Final at the DeltaPlex.

Instead of helping her team compete for another championship, the four-year varsity performer was on crutches with her left ankle bandaged after tearing her Achilles tendon during Round 3 at last weekend’s Regional.

“It was definitely tough not being out there, but I knew they could do it,” Hajec said. “Every single one of those girls is so talented and so driven. It is the best team I’ve ever been on.”

The loss of a seasoned leader, however, didn’t derail the Marauders’ recent success.

Gibraltar Carlson used a dominating Round 2 effort to gain a sizable advantage and claim another MHSAA title – its third straight and fifth over the last six seasons. 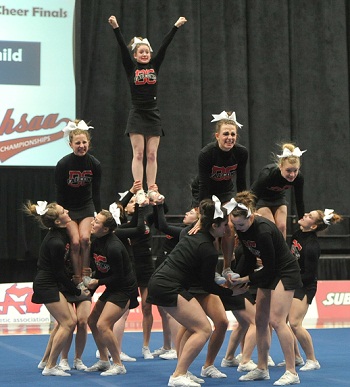 “Today was a wonderful, wonderful day,” Gibraltar Carlson coach Danielle Jokela said. “We’ve suffered a lot of setbacks this week with losing our four-year senior, who was in every round, to an injury. But they fought as hard as they could after losing at Regionals.

“We practiced Sunday through yesterday (Friday) with their whole heart, and so winning today was the sweetest victory that I’ve ever had.”

Hajec’s absence forced the Marauders to shuffle each round and throw different girls into the mix.

The changes were hardly noticeable, especially in Round 2, as the team took control with a high score of 230.48 and opened a five-point lead entering Round 3.

“We made some last-minute changes Friday,” Jokela said. “We took somebody out, and put someone else in, and it was on the line. It was heart that pulled them through because at this point, the skill was already there.”

Hajec was overwhelmed by her team’s Round 2 effort.

“That was the best that round has been all year, and I was so excited to watch it,” Hajec said. “I was jumping and screaming. I was so happy, and the team handled the pressure today very well.”

Gibraltar Carlson capped the afternoon with a spirited Round 3 and left little doubt in defending their title.

“It was a beautiful round, and I’ve never seen a group of girls fight so hard for something,” Jokela said. “We put somebody else new in that round and they decided that it wasn’t going to stop them from being state champions, because that’s what they deserved.”

While the Marauders have transformed into a perennial Division 2 powerhouse, Jokela said remaining a top contender hasn’t been easy.

“It’s real easy when you are second or third or not in the state finals at all to fight to be here, but to be in first place and consistently win is the hardest thing in the world,” she said. “It’s hard to stay on top when everyone is coming after you and you know it.”

It was an all too familiar finish for Divine Child, which won the Catholic High School League this winter.

The Falcons fell short of another MHSAA title and finished second to Gibraltar Carslon for the third straight year.

“My girls had a goal of just having three great rounds, and they just left it in the hands of the judges,” Divine Child coach Amber Genevich said. “Unfortunately, the cards didn’t fall the way we wanted them to today, and it was disappointing. But at the end of the day, I’m proud of my team and the hard work they put in all season and the obstacles they had to overcome.” 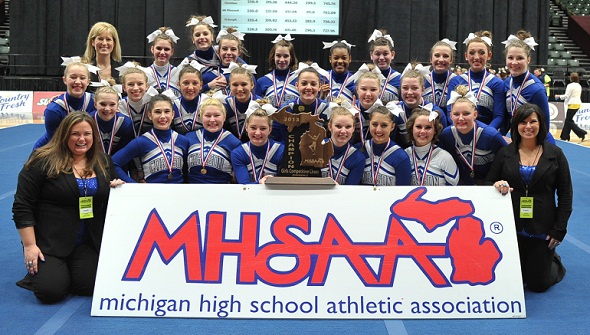