Twice before, these perennial powers had met for the Class B title. Lakewood beat the Broncos for the 2012 championship in three games, while North Branch came home with the title in 2014, also beating the Vikings in three.

With a noticeable height advantage across the board, North Branch this time took advantage of its size early and seized control in the first game on its way to a 25-15, 25-21, 25-20 victory that clinched the program's third Class B championship at Battle Creek's Kellogg Arena.

"I have never seen our team so focused," said North Branch coach James Fish, whose Broncos end their season with a 58-9 record. "We were so focused the whole match. We didn't get too high or too low. We had a great gameplan, and they executed it."

"They were bigger than us, and we didn't have a way to stop them," said Lakewood coach Kellie Rowland, whose team ended its great run 54-6. "Their size played a huge factor. We did everything we could to get up and block them, but they just went over us."

Two tall Broncos for whom Lakewood had no answer were 6-foot-1 sophomore outside hitter Allyson Severance and 6-1 senior middle hitter Olivia Fike.

Severance led all net players with 12 kills, while Fike finished with seven. 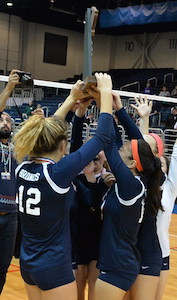 Fish was grateful his team was able to get through Thursday and into the Final.

That's saying a lot coming from a coach with 17 years experience, who stands 24 wins shy of 1,000 and now has won three MHSAA championships to go with three runner-up finishes.

"We beat a great team tonight," Fish said. "They are a phenomenal program with an outstanding coach. We just played extremely well tonight."

PHOTOS: (Top) North Branch’s Olivia Fike (12) attempts to send the ball over the net and past a Lakewood blocker. (Middle) The Broncos raise their Class B championship trophy Saturday.