BATTLE CREEK – Two of the greatest athletes ever to compete for Novi High School finished two of the most memorable volleyball careers in school and state history Saturday at Kellogg Arena.

Setter and Miss Volleyball Award winner Erin O’Leary and outside hitter Abryanna Cannon led the Wildcats as they captured their third straight Class A volleyball title with a 25-23, 25-9, 25-23 victory over a young Bloomfield Hills Marian team in their last match as high school teammates before they face off as Big Ten rivals at the college level.

O’Leary is signed with University of Michigan, and Cannon is signed with Northwestern. Cannon finished her high school career with 18 kills and 15 defensive digs, while O’Leary had 33 assists and 11 kills to conclude her fourth trip to the Finals and third title run.

“I came in a few weeks before the start of school (junior year) and I went into the gym and I knew these players were special,’’ said Cannon, who moved from Traverse City West midway through her career. “I couldn’t have asked for more. It has been a great experience. Erin is just an incredible setter. She made things easy for me.’’

The Wildcats finished 57-3 to run coach Jennifer Cottrill’s record to 286-24-2 in six years guiding the program.

“I don’t know if I or the team understands the gravity of what we have just done,’’ said Cottrill. “They are just really good student-athletes. They deserve it. It’s amazing that they have accomplished what they had set out to do.’’

When it reached 17-13, first-year Marian coach Lauren Duquette was forced to call a timeout. Her team got the score to 20-20 but couldn’t gain the advantage. A Cannon dink shot over the net ended a two-point win for the Wildcats.

“It was the first time in the tournament we played under pressure, and winning that first game was the difference,’’ said Cottrill.

Novi came out swinging in the second game, scoring eight of the first 12 points to force Duquette to again call a timeout. 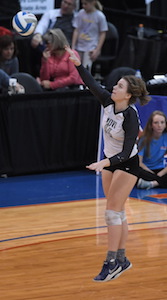 Novi continued on to build a double-digit lead (19-7), with the Mustangs having no answer.

Cannon and Kathryn Ellison (who will next play at Kent State) kept pounding winners at the net while O’Leary kept the motor running with her all-around game.

The lead eventually swelled to 21-7 before Marian scored another point. An ace by Cannon ended the second game as the beleaguered Mustangs faced the inevitable.

But it was a loose group at the other end as O’Leary danced to “Don’t Stop Believing” and hugged teammates as she zeroed in on her third title.

“It’s about the team,’’ said O’Leary. “What makes it so much easier is that we focus on each other as a team. We’re a family. Our parents are family, and we are all so close.’’

Hanging on, Marian trailed 10-9 in the third game, then led 14-12 before another ace by Cannon started a rally for the Wildcats.

A soft spike by O’Leary gave the Wildcats a 19-18 lead. Marian made one last push, getting to within 22-21. But a Cannon block put Novi back within two points of the title, and moments later the Wildcats clinched it.

Ellison added 12 kills and 14 digs for Novi. Junior setter Maddie Dowd had 18 assists for Marian, which advanced to its first Final since 2013 by avenging two losses to Farmington Hills Mercy in the Semifinal.

“They were just so much taller than us,’’ said Duquette of taking on Novi’s hitters.

But noting the run, she added, “This is my first year here, and what my team has been able to accomplish in 3½ months … I may look normal, but I’m crazy and I put them through a lot.’’