Tuesday, Feb. 26, was a particularly busy day on the ice as the 2019 MHSAA Ice Hockey Tournament reached just its second day around the state.

On the slate that night were 27 Regional games, bringing the two-day total to 48 on the heels of Monday’s busy calendar.

As teams were busy setting their sights on the ultimate goal, so, too, was another group of accomplished skaters who toil with much less fanfare. Nonetheless, the games can’t start without them – the folks in the striped shirts who call the games.

Just as players and coaches will welcome the expanded playoff format in 2020, the officials are looking forward to the change as well.

“When we got to the first week of the tournament, it seemed like we were going every day,” said Jim Gagleard, who assigns officials for the Livonia Ice Hockey Officials Association. “There are only so many officials to go around in any sport. By allowing us as officials a day or two to catch our breath, it’s good. Good for us, and good for players more than anything.”

If it seemed like every day, well, it was. A total of 66 games were played over the first three days, and 89 over the first four. Considering each game at the Regional level has three officials, that computes to 267 officials needed during that span. On the busiest day, 81 had to take to the ice.

Given that there were a total of 302 playoff-eligible officials in 2019, filling those slots can be a logistical nightmare for assigners at times.

“Regional week will see a huge burden alleviated for officials and especially assigners. There will be so much more flexibility under the new format,” said Dan DiCristofaro, President of the Northeast Hockey Referees Association. “Last year, we were faced with so many doubleheaders at single sites, and the first games needed an early start so that the second games would not last late into the evening on school nights.

“At times, the most important factor for the assigner was scheduling those officials who could get to the arena for the early start times. Merit and ability sometimes had to take a back seat.”

Gagleard agrees, saying, “Assigning-wise, early games are the toughest to fill. Everyone has a job, and in order to work a game they have to tell the boss they’re leaving at 2:30 for a 5 o’clock game. You start to look for officials who are retired, or can get out of work, instead of the most qualified. That’s not fair to the teams playing.”

In the northern reaches of the Upper Peninsula, the problem is more acute.

Sean Jacques is the athletic director at Calumet, and also an experienced official, having skated the Division 2 Final in Plymouth in 2016.

“Not enough,” Jacques said, in reference to the number of playoff officials in the UP. “Not enough. When I get the list of eligible officials that is sent to tournament managers, I have to search and scramble to find three people within an 80-mile radius.”

Moving the Quarterfinals to the weekend will definitely help matters, and eliminating Regional doubleheaders should ease the scheduling anxiety as well. 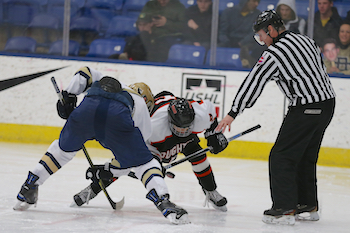 “With Regionals spread out more, without doubleheaders, officials potentially could work more days,” Jacques said. “And there should be more availability for the Quarterfinals. The last few years, it was in the Sault, and getting four guys to the Sault on a weeknight, whether from Escanaba or northern lower Michigan, was difficult. There were times I’d turn down a Quarterfinal because I just couldn’t get there and back and make it to work the next day. Saturday makes it easier.”

On the west side of the Lower Peninsula, assigner Randy Sheahan uses a mathematical approach to illustrate his challenges, even for the regular season. Sheahan calculates that 98.88 percent of all West Michigan games are scheduled for Wednesday, Friday, or Saturday. Breaking it down further, 84.39 percent skip Wednesday and schedule only Friday or Saturday.

With the shortened regular season coming in 2019-20 to allow for a three-week tournament window, Sheahan took a proactive approach.

“When the MHSAA announced the change to a three-week tournament, I emailed all West Michigan coaches, plus a handful of athletic directors and booster leaders who may be involved in team scheduling,” Sheahan said. “I encouraged them if they are having difficulty squeezing all their games into a window which is now one week shorter, to give further consideration to playing on Mondays, Tuesdays, or Thursdays to greatly alleviate some of the stresses we place on the West Michigan officiating staff.”

As for the MHSAA Tournament, Sheahan agrees with his brethren across the state in metro Detroit that the expansion will benefit assigners, officials, and teams.

“I only see positives,” Sheahan said. “This gives me tremendous flexibility with our staff to maneuver around their professional and personal schedules to keep our best officials on the ice every round, which is an expectation teams have for playoffs. It also provides (at times) much needed rest for officials and teams, especially if they are involved in overtime affairs. This could help with the quality of overall game play.”

That’s the goal for everyone. Fresher legs for players and officials alike will provide a better experience for all involved.

“This allows for physical recovery for everyone on the ice,” said DiCristofaro. “It also allows for better time management for student-athletes, officials and coaches. Even at the Quarterfinal offerings with four officials for each game, we’d run into issues as far as which people could get to places, or wanted to travel and skate late on a work night. Saturday give us much more flexibility and should create more interest in the state tournament.”

The Quarterfinals, Semifinals and Finals have employed a four-official system in recent years, affording an extra position each game for deserving officials while adding to the quality of the game for participants at the highest level.

Sheahan plans to utilize the new format to continue to reward those among his troops who have earned their stripes for such contests.

“In theory, I may have opportunities to increase game counts for some of our perennial playoff officials, but I have no plans to do that,” Sheahan said. “We have other officials every season who are good enough to skate playoffs and have earned it, but simply couldn’t quite break the playoff bubble. Now the opportunity presents itself to reward some of those officials. It would be counterproductive to officiating development if fewer officials are getting opportunities for important games.”

Similarly, DiCristofaro is hoping the time will come when four officials will be assigned to skate Regional Finals, and perhaps the new length of the postseason will open the door.

“Some of most important games are the Regional Finals. Maybe this new schedule can help,” DiCristofaro said. “Four officials offer teams the best possible ice coverage, and they deserve that.”