ALLENDALE – A few weeks after Forest Hills Northern second baseman Mitchell Gumbko “pinch hit” to help Allendale pitcher Javier Gonzalez bridge a language gap during a freshman baseball game, their story of sportsmanship continues to spread around the Grand Rapids area and beyond.

Pitching in his first high school game as a member of the Allendale freshman baseball team against Grand Rapids Forest Hills Northern on April 18, Gonzalez was in a jam. Not only did he walk the first batter he faced, but he then committed a balk. With the umpire coming out to the mound to explain the situation, the jam only worsened as Gonzalez – who has been in the United States for only just over a year – speaks very little English.

In a society where winning is a major emphasis in sports, Gonzalez, however, picked up a major assist from the Northern batter who was due up soon.

Gumbko has been in the Forest Hills Northern school district’s Spanish Immersion program since he was in kindergarten. With Gonzalez continuing to struggle, Gumbko made his way to the mound with the coaches and umpires to give his opponent some help.

“I didn’t realize their pitcher was struggling so much,” Gumbko told Advance Newspapers/MLive last week, “but Coach (Joe) Payne asked if anyone speaks Spanish on our team. I have been in the Spanish Immersion program since kindergarten so I told Coach that I’m fluent in Spanish.”

Gonzalez’ coach Chad DeWeerd was happy for the help from the opposing dugout.

During Allendale practices, DeWeerd has been counting on freshman Cooper Tolson to give all the help he can. But explaining the balk rule required a little more explanation than the rest of the Falcons could offer their teammate.

“Before the game I let the Northern coach know that Javier speaks hardly any English,” DeWeerd also told Advance Newspapers/MLive. “My kids know a little Spanish, but not enough to help in that situation.”

DeWeerd had told Payne beforehand about Gonzalez and the language hurdle. “As I was walking to coach third base, the head coach from Allendale warned me that his pitcher does not speak English and that this is his first time pitching,” Payne said. “I told him not to worry.

“The Allendale pitcher looked nervous and uncomfortable, and you can tell he was unfamiliar with pitching. After walking our first batter, the next pitch he balked, which advanced our runner to second base. I saw the field umpire trying to explain to the pitcher what he was doing wrong, but the pitcher looked at him with a blank look.”

Payne informed the home plate umpire about the situation. After a few more pitches, and with Gonzalez continuing to struggle with the balk rule, Payne called on his player to step in and become a language pinch-hitter.

At Ada Vista Elementary, all subjects are taught in Spanish beginning in the first grade. Gumbko has become fluent in his second language.

“I needed Mitchell to become his coach instead of his opponent,” Payne said. “I asked the Allendale coach if I could call time out and have one my players translate to the pitcher.”

This time the conference on the mound became a lot more beneficial for Gonzalez, who had someone with whom he could communicate – even though he was wearing the opponent’s uniform.

“I think he was pretty surprised and also happy to be able to talk to someone he could understand,” Gumbko said. “The umpire told me what to say to him because he was balking, and he did not know he was doing it. It was pretty awesome to just know that I can use (Spanish) on a daily basis and was cool to realize I was helping him out.” 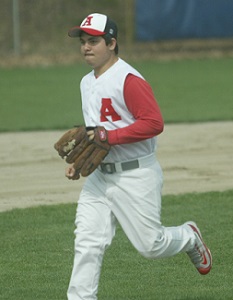 “You can tell Javier was nervous and did not know what was going on, until Mitchell started to translate instructions to him in Spanish,” Payne said. “Javier’s eyes just sparkled. Javier just kept nodding yes, ‘Si,’ and at the same time agreeing in Spanish back to Mitchell and understanding what Mitchell was saying.”

While Gonzalez’ teammates are not as familiar with the Spanish language as Gumbko, they have been trying their best to pick up as much as possible.

“The team has really embraced Javy,” DeWeerd said. “The first day of tryouts when they were stretching and loosening up they started counting in Spanish.”

“Cooper knows a little more Spanish than the rest of the guys,” DeWeerd added. “He has tried to help him as much as he can. The guys also have an app on their phone that helps with translation, and they have a lot of fun on the bus rides. This is a really special team and they have embraced Javy, and he really is one of the kids.”

Gonzales and his family of five, who are originally from the southern section of Mexico, have been in the United States for a year and a month. While he also enjoys soccer and was a member of Allendale’s junior varsity soccer team last fall, he has been playing baseball since he was a child and enjoys pitching the most. Along with pitching, Javy also plays right field for the Falcons.

Since the Northern game more people in the Allendale community have learned about Javy’s story – and offered assistance.

“Our 8th-grade Spanish teacher, Mrs. (Lynne) Burns, found out about Javy’s story and sent an e-mail to our athletic director offering to come and help,” DeWeerd said. “She is going to be at our next game. It’s not just the team that has helped out Javy, but the whole school is helping.”

Having Gumbko step up in that first game, however, was an act of sportsmanship that will be remembered for some time.

“I just stopped and realized this is why I am a teacher,” Payne also said in the Advance Newspapers/MLive report. “This is why I coach, for moments like this.”