His concerns were clearly unfounded.

It was the first MHSAA title for the Eagles (23-11-1), who outscored their opponents, 64-9, in seven tournament games. In five of those victories, Parkway scored at least 10 runs.

“One-through-nine, you don’t get any relief in our lineup, and that’s been a huge part of our success the last couple of weeks,” Koch said. “Looking at the last seven games, and it sounds kind of foolish, but offense was our biggest question mark.

“We knew pitching was going to be there, and we’re comfortable with our defense, but these guys, to their credit, they’ve taken an aggressive approach and they’ve hit some pretty good pitching. We got hot at the right time, and that’s our goal every year, peak at the right time and we did that.”

St. Patrick, playing in its first title game since 1993, finished 23-8. Parkway's only other championship game appearance came when it finished Division 4 runner-up in 2009.

Parkway jumped to a 5-0 lead with a five-run second inning and was never seriously threatened, though St. Patrick scored a run and left the bases loaded in the top of the third. 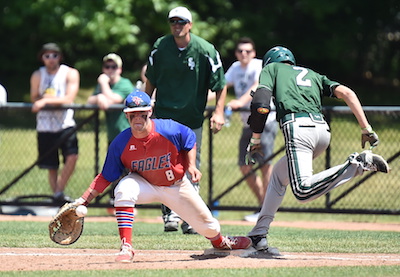 Banks came on to get the final out of the inning on a strikeout. Parkway starter Riley McManus walked six over 2 2/3 innings. He forced in St. Patrick’s third-inning run with a walk.

“Riley didn’t have his best stuff, but he still worked hard, grinded it out, and I guess I just did what Coach needed me to do and that was throw strikes and get outs,” said Banks, who surrendered two runs on six hits while striking out three over 4 1/3 innings for the victory.

Banks threw a complete game in Parkway’s 10-1 Quarterfinal victory over Unionville-Sebewaing on Tuesday. The Eagles’ top three pitchers, Manier (Spring Arbor), McManus (Eastern Michigan), and Banks (Adrian College) are all seniors who will play in college next year.

“Pitching is always huge in the playoffs,” Koch said. “If you have pitching, you have a chance to win no matter what. We have three guys who are pitching at the next level next year. You don’t get that very often at any school, let alone a Division 4 school.

“Having three guys this week was huge … we have three dominant pitchers.”