Stevenson had three goals including two straight during the third period to send Saturday’s game against Petoskey to overtime, as his Traverse City Bay Reps co-op team went on to win 5-4 and clinch the Northern Michigan Hockey League championship. Stevenson, in his fourth season in the program, is the team’s leading scorer and has scored five goals over his last three games in earning the Michigan Army National Guard “Performance of the Week.”

The Bay Reps are made up of players from Stevenson’s St. Francis High School as well as Bear Lake, Elk Rapids, Kalkaska and Kingsley. They’ve won nine of their last 10 games to move to 17-5 and earn the No. 11 ranking in Division 1. The hat trick was Stevenson’s second this season, and after Thursday’s win over Manistee he has 22 goals and 20 assists in 22 games this winter. Petoskey led Saturday’s game 2-0 before Stevenson scored his first goal, and he added his second on a power play and his third from just outside the circle.

Stevenson is playing this season for his third high school head coach; his dad Mark was the coach Jake’s freshman year, followed by Ryan Fedorinchik the last two and now former assistant – and NHL defenseman – Mike Matteucci. Jake Stevenson also played soccer at St. Francis and golf earlier in high school, and he’s hoping to continue playing hockey at the junior level and then collegiately after graduating this spring. He carries a 3.0 GPA and eventually would like to study drone piloting.

Coach Mike Matteucci said: “This will be Jake's fourth year playing high school hockey, and each year his game has improved. Jake has always wanted to move on to the next level after high school, so the last couple of years he has really taken ownership in his game. As a coach, it is a pleasure to come to the rink every day and have players like Jake who are coachable and who make others around them better. This year more than others, Jake has embraced the ‘team’ game, which as increased our statistical output as well as helped us win more games. What separates Jake from others is his tenacity. He is a very competitive person who is hard to play against. He is definitely an impact player on our team!”

Performance Point: “It's senior year and you don't want to go down without a fight. All the boys started the pick it up in the third period, and we all brought it together,” Stevenson said of his team’s comeback against Petoskey. “We just weren’t connecting our passes. Everyone was getting too nervous with the puck, not really calm. We weren't really playing our game. I think just being one of the leaders on the team, you need to show that even when we're down, it’s no excuse to stop playing. Someone had to step up and take control a little bit.”

Together as a team: “It's fun just knowing there's all these guys (from Bay Reps’ schools) out there, and being able to play with them and meet them and become new friends. I think when we're at the rink we make the most of it, every time we're there from the second we walk in to the second we leave. Usually no one just leaves right after practice – we kinda hang out for a little bit and talk, and catch up and mess around see how everyone's day is going. We hang out every now and then in the summer times. We do some summer hockey together. ... We try to stay close.” 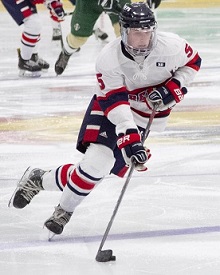 Valuable input: “We've brought in Mike Matteucci as our head coach and Kyle Jean, Mikey Wittersheim and of course Coach (Eric) Videan. I think all the coaching staff has helped a lot, helped bring everyone together. They've taken different looks at kids and helping them out. Coach Jean has helped me out tremendously on offense, just helping me realize when to shoot the puck, when to make the pass, how to make the plays. Coach Matteucci has been helping me a lot in the defensive zone, and so has Coach Videan. And Mikey's our goalie coach, and he's been helping me out with tips on where to shoot.”

Dad knows: “It was great having him as a coach because he played in the high-level juniors and he knows a lot about the game, and he’s coached a lot of kids so that helped a lot. Every now and then he still gives me advice from what he sees and tries to help me out still.”

Game on: “Everybody in my family has played hockey, even my mom did; she played on a girls club team when she was younger. (I have) three sisters and three brothers … I'm the second youngest. We used to build a rink in our back yard, and so we'd all go out there and play, and we got a little competitive because obviously we all want to be the best from the family. But it's fun. I'd say I'm the best, but ... my brother thinks he is. I don't know about that.”