Only six wrestlers have finished as four-time champions during the 52 years of the Freeland Wrestling Invitational – and on Dec. 30, Deming became the latest. It was a day of opportunities for the Caro senior, and he made good on them all in earning this week’s Michigan National Guard “Performance of the Week.”

Deming also earned the 150th win of his career at the event in helping the Tigers claim the team championship ahead of Bay City Western after two straight seasons finishing runners-up to the Warriors. He’s 15-0 this season with 13 pins and 150-33 with 101 pins over his four seasons – he wrestled at 171 pounds as a freshman and 189 as a sophomore and junior before moving to 215 this winter. Deming made the MHSAA Individual Finals last season for the first time and finished third in Division 3 at 189. He’s hoping to become Caro’s first individual champion since 2005 and lead the No. 8-ranked Tigers to their first MHSAA team title since 2003.

Deming also played football and throws shot put and discus during the spring, and he missed the MHSAA Finals in track and field last season in discus by only five feet. Deming ranks among the top of his class academically with a 3.8 grade-point average and currently plans to attend Saginaw Valley State University and study business with an eye on possibly becoming an accountant.

Climbing every season: “I’ve cut my losses every year since freshman year, from 18 to 11 to four. I think it’s because of our practice room and how hard we work, and my practice partners pushing me. We keep the pace up all the time; our practices are really intense. It’s impossible not to get better at our practices.”

Finishing move: “Cross-face cradle. It’s just seems like once I start with the move, they can’t stop it. It’s a powerful move, and I can force them into it, and it works. I’ve probably gotten 70 percent of my pins with that move.” 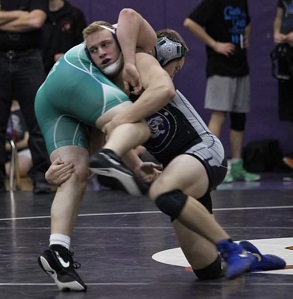 Switching sports with the seasons: “I do wrestling in the summer, when track is over. But football, I just love being able to hit people. It’s fun, and I love being part of it. Track is more for fun, but I’m still really competitive at it. I still work really hard, like with everything else I do.”

The Michigan Army National Guard provides trained and ready forces in support of the National Military Strategy, respond as needed to state, local, and regional emergencies to ensure peace, order, and public safety. The Guard adds value to our communities through continuous interaction. National Guard soldiers are part of the local community. Guardsmen typically train one weekend per month and two weeks in the summer. This training maintains readiness when needed, be it either to defend our Nation's freedom, or protecting lives and property of Michigan citizens during a local natural disaster.


PHOTOS: (Top) Tyler Deming, left, is a four-year varsity wrestler for Caro. (Middle) Deming right, locks up for the start of a takedown; he's won 150 matches over his career. (Photos by Mary Filkins Photography.)