As he had the past two years, Davenport played a major part in Detroit Catholic Central claiming its third straight Division 1 team championship Saturday at Wings Event Center. The nationally-regarded 145-pounder picked up three victories on the weekend, all wrestling up at 152 pounds, in earning the Michigan Army National Guard “Performance of the Week.”

Davenport won with a pin in 4 minutes, 50 seconds against Clarkston’s Jacob Billette in the Quarterfinal, a 21-5 technical fall against Westland John Glenn’s Brenten Polk in the Semifinal and a 7-3 decision against Brighton’s Victor Grabowski in the Final. Those victories improved Davenport’s record this season to 34-1, with his only defeat coming against an opponent from Indiana by 5-2 decision while wrestling up at 160 pounds.

What also made this season’s team championship special was Davenport was able to compete with his brother Kamron, a freshman who wrestles at 125 pounds. Now Kevon gets a chance to finish on an individually historic note. Davenport will bring a 167-10 career record into this weekend’s Individual Finals at Ford Field, where he will attempt to become the 25th or 26th wrestler – and first from DCC – to win four MHSAA titles (Hudson’s Jordan Hamdan also will try to win his fourth). Davenport’s first three championships came at 119, 130 and 145 pounds, and he’s the top seed at 145 with matches set to begin Friday. Davenport carries a 3.0 GPA and has signed to continue his career next season at University of Nebraska, where he intends to study sports media and communications.

Coach Mitch Hancock said: “Kevon is an incredibly gifted and hard-working young man. He's very well-liked and respected by his peers and amongst his teachers here at Catholic Central. Kevon has the opportunity this weekend to do something very special, and we are proud of the hard work, dedication, and focus he's put into representing himself, his family and Catholic Central in an incredible way. I consider it a blessing to be a part of Kevon's life. He's an incredibly mature, selfless, and caring person. His personality shines brightly, and he is very respectful and humble. Kevon has incredible mentors in his father Kevon and mother Izetta.”

Performance Point: “We tried to stay even keeled, not get too high or too low,” Davenport said of the championship match against Brighton. “We had a mindset on dominating, and I felt like in the matches that we won, we controlled the pace, we did our thing and tried our best to wrestle our style. We were just trying to come out with a mindset of dominating and having fun.”

Starting strong: “I think it had a huge impact on the dual, being able to get the momentum rolling and kind of keep things going from there. We talked a lot about that. Momentum is a big thing for us, so that’s really important to us.” 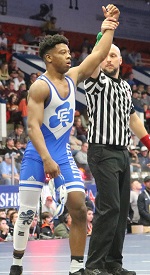 Bringing brother on the ride: “That was really fun. (Kamron) was a little down on himself because he lost, but he clinched the dual for us. He didn’t get pinned, so that clinched the dual for us. I think it was really cool just being able to experience this entire season, my last high school season, with my brother. I think it was a great feeling.”

Focus on 4: “It would mean a lot (to win a fourth championship). It’s something that I worked a lot for, as far as coming up through middle school. That’s always everybody’s goal coming up, being a four-time champ, and you want to chase that goal. For it to be so close to me and such an attainable goal, it’s really unfathomable, especially at CC.”

PHOTOS: (Top) Detroit Catholic Central’s Kevon Davenport works toward a pin during the Shamrocks’ Quarterfinal win over Clarkston on Friday. (Middle) Davenport’s arm is raised in victory at Wings Event Center. (Click for more from HighSchoolSportsScene.com.)