The reigning MHSAA Division 1 Finals champion continued her undefeated run through high school gymnastics by finishing first in the all-around competition and leading Farmington United to the team title at Saturday’s Canton Invitational, which again featured the majority of the state’s top teams. Vargo scored a 36.950 to edge 2017 Division 1 Finals champion Cate Gagnier of Grosse Pointe United by two tenths of a point, earning the MHSAA “Performance of the Week.”

Vargo had reached the club gymnastics Level 9 and was on a track to compete collegiately, but decided before her junior year to instead focus on academics as part of the Farmington district’s International Baccalaureate program. A student then at Farmington Hills Harrison before it closed last spring, she joined a Farmington United team featuring five seniors and helped it repeat as MHSAA team champion before then winning the Division 1 title the following day. Now a student at Farmington High, she has finished first in every all-around competition during her two seasons at the high school level. At Canton, she just missed a perfect score on vault with a 9.9 and also was first on floor exercise (9.6), seventh on uneven parallel bars (8.875) and 17th on balance beam (8.575). Farmington United is a much younger team this winter with a number of freshman contributors, but posted a team score of 143.675 to outpace runner-up Rockford’s 142.559 and third-place Livonia Blue’s 140.25.

Although Vargo switched to high school gymnastics to free up more time for her studies, there’s no arguing she doesn’t maintain a packed schedule. She carries a 4.0 grade-point average while taking the advanced curriculum and also plays violin in the school orchestra and with her mother Sandra, a middle school orchestra teacher in the district. Additionally, Elena has built a jewelry business where she sells her creations and is a two-time Miss Farmington pageant runner-up. She is considering studying at University of Michigan or Miami University of Ohio, and also is awaiting replies from a pair of Ivy League schools. She’ll base what she studies in part on where she attends college – she would like to major in something in the sciences and potentially pre-medical, with a minor in business.

Coach Jeff Dwyer said: “Elena came onto a very good team her junior year, but she is an elite gymnast that has pushed us to become one of the top teams in the state last year and this year. She is one of the better floor exercise and vault performers in the state. She averages in the 9.6-9.8 range on floor, where she combines powerful tumbling with beautiful dance skills. When her vault is on, it is difficult for anyone to beat her. She performs a laid-out Yurchenko vault which has the highest start value possible (10.0) as it is a very difficult and risky vault to perform. However, she does it almost perfectly – her score of 9.9 at the meet is evidence of that perfection. A slight foot movement on her landing cost her one tenth of a point. When a team has someone who can attain such high scores in high school, it is a big lift to the team score. We have a strong team on floor and vault, but Elena adds that extra punch that can lift us even higher, especially against other strong teams.”

Performance Point: “I actually had a gymnastics career-high of 9.9 on vault,” Vargo said while recalling her Canton performance. “So that was the highlight of the meet for me, getting a 9.90, and if I stuck the landing I’d get a 10.0. So that’s my goal, one of these next meets, to get a 10.0 on vault. Floor-wise, I was happy with my performance. The other two events, I let myself get too much in my head and I wasn’t really focused on the uneven bars or the balance beam as much as I normally am. But what really helps me with those events to barely get by with them is my teammates. With any athletics or sports, your teammates are really the ones to put the foundation to motivate you … (and) my team really helped motivate me with that. … Our team was great. I was so happy we were able to beat the other 17 teams that were there. We see Rockford and Livonia Blue as our competition, and this meet really just was such a determining factor in how we may perform at states against them. Rockford won the Rockford Invite a week or two before the Canton Invite … so it really comes down to the best of the best. It comes down to your team always motivating you, your ability to stay focused in performance. Not just one person on our team is going to win it for us. We all have to work together. We definitely have been working on that, and it definitely showed up at the Canton meet.” 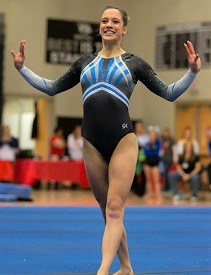 Showing the way: “I believe that I’ve always been a leader for our gymnastics team. I do do a higher level of skills. (But) the girls always ask me for advice on how to do specific skills, and I’m always there to help them and give them drills and different ideas. Even though I’m more on quiet side while I’m training and more focused on myself, I’m always there to motivate them and give them advice, and they do the same towards me. I want my entire team to perform just as well as I do.”

Always a Hawk, now a Falcon too: “Yes, I really do miss Harrison. Harrison was our home and we had a connection not just with the building but all of the people there. Coming to Farmington, originally there was a disconnect between Harrison and Farmington students and teachers. But I think because it’s been a few months, we’re all OK now. People-wise we’re fine, it’s just the building that’s changed. … It was pretty tough at the beginning, but it’s good now.”

Gymnastics is part of me: “I’m a gymnast at heart. Ever since I was 3, I’ve done gymnastics. It’s a part of my identity. I literally don’t know what I would do if gymnastics was not in my life. Practice is the place I can go to (and) forget about everything else and (for example) focus on my flips. I just have such a strong passion for going out on the floor and showing off what I’m able to do. It fills me so much with energy. I look forward to my practices and having fun with my teammates. It’s been a part of me for so long, it’s created who I am today. And I know when I’m older, I hopefully want to be a coach. Because gymnastics, the knowledge, the skills behind it, there’s so many different elements that have captured my heart.”

EV the entrepreneur: “My jewelry business is called ‘Designs By E.V.’ I specialize in custom jewelry and essential oil diffuser jewelry. So I make rings, earrings, necklaces, bracelets, and I go to a bunch of different art fairs and jewelry shows year-round, and I set up my booth and I sell my products. … I make jewelry, basically to, kinda like gymnastics, (it’s) how I can escape from reality. I’m able to express my more creative side, and it actually helps me relax more.”