After taking fifth, second and second, respectively, in the MHSAA Finals Division 1 competition her first three years of competition, Grosse Pointe United’s Nguyen faced high expectations heading into her final season of high school gymnastics – and has met them all. Nguyen scored an all-around 37.975 to win Division 1 at the Great Lakes League Championships on Feb. 18 and earn the Michigan Army National Guard “Performance of the Week” for Feb. 13-19, and she’s won all of her invitationals this season, including the prestigious Canton event that yearly draws the top competition from all over the state.

Nguyen won on all four apparatuses at the league meet, and also posted a 37.150 all-around Wednesday against Canton. She holds every record for Grosse Pointe United, and next will lead her team into the Regional on Saturday at Walled Lake Central. Like many gymnasts, Nguyen also dives – she qualified for the Lower Peninsula Division 2 Finals in the fall and just missed making the final round of competition. She also will return for her third season of lacrosse this spring after sitting out last season with an injury.

Injuries also will keep Nguyen from pursuing college gymnastics, but she’s got other goals set. She will attend Wayne State University and study computer technology after cultivating an interest in coding during a technology class she took as a junior at North. She carries a 3.5 grade-point average and also is interested in coaching when her competing days are done – which likely will be in two weeks, and potentially after she celebrates a Division 1 all-around title.

Coach Kristin Remillet said: “Watching her success over the past four years has been such a fun experience for me as a coach. It’s great to see a deserving, hardworking young lady like Izzy get the recognition she deserves each and every meet. As an individual competitor, she is peaking this season, her senior year, and has won the all-around title in every single invitational she has competed in this season. … She’s a great all-around gymnast who is a standout competitor in every event. That’s really Izzy’s strength; she is so well-rounded across all four apparatuses, it makes her tough to beat in the all-around competition. … Every time Izzy competes for our team in a large-scale meet, I’m impressed with her focus and her ability to shine in times of pressure. Another of Izzy’s strengths that I’m very impressed with is her ability to lead others in our gym. She’s not just a phenomenal athlete, she is also a great teammate and friend. Whether you have been on the team with her for two years, or two weeks, she makes so many teammates feel comfortable, welcomed, and loves to help them improve as well.”

Performance Point: “Most of my (league) performance, I was pretty happy with; on beam, I haven’t been landing my skills lately, so I was pretty scared about that, but on bar I was pretty satisfied (because) I almost had a fall but I was able to save it,” Nguyen said. “Overall, I was really proud of myself. … I still want (to win MHSAA Finals). It still makes me want to work hard seeing how close other girls were to me. I’m still pushing myself in practice, getting ready for Regionals and states. I’ve just been trying to work on hitting everything.”

Taking flight: “My favorite (apparatus) is uneven bars. I feel like I’m just more free. I feel like I’m flying. When I first started learning it, just started giants, I started liking it all. It’s not something I’m scared of; on beam I’m more scared of doing stuff than on bars.” 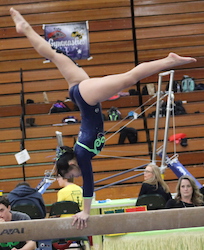 Sport for every season: “It’s mostly keeping me in shape. Diving is the flipping; I just like flipping a lot. In lacrosse, I like to meet new people too who like other sports, and (I like) the running. I’m kinda a fan of running.”

More than tough enough: “Last year, the week of states, I hurt my knee. I have extra bones in my feet, and I just hurt my ankle. … I’d say (gymnasts) are pretty tough. A lot of people don’t think we’re strong. It’s because they think we’re small; they think we’re weak. It’s really not (true). I love gymnastics. I just wanted to keep doing it. I knew I had to take breaks and everything, but it’s something I really like.”

Call me Coach (next year): “Right now I coach little kids, just for fun, but my (high school) coach is planning to have me coach next year if I can. I like seeing new girls like the sport that I like, and it makes me happy helping everyone so they can get better.”