Tied for third in points for one of the top-ranked teams in Michigan, Tulpa considers himself a playmaker setting up Hartland’s potent offense. But he’s driven the Eagles’ three-game winning streak as a scorer, putting in two goals versus Northville in a 3-0 win, another against top-ranked Livonia Stevenson in a 6-5 victory and Tuesday the game-winner to down Brighton 2-1 and earn the Michigan Army National Guard “Performance of the Week.”

The junior left wing has nine goals and 11 assists this winter for Hartland, which sits 12-4-1 and ranked No. 4 in Division 2. This recent run has been one of the most impressive by any team in the state this season; in addition to Stevenson holding down the top spot, Northville now is ranked No. 8 in Division 1 and Brighton is No. 3. The win over the Bulldogs clinched the Kensington Lakes Activities Association Gold title.

Tulpa has nearly equaled his nine goals and 12 assists from last season, when he helped the Eagles reach the Division 2 Semifinals in his first season of high school hockey after making the switch from AAA travel. He hopes to play junior hockey after high school and then eventually at the college level. Tulpa is interested in studying radiology and working in the medical field – he carries a 3.8 grade-point average with math and science among his favorite subjects.

Coach Rick Gadwa said: “What's great about Brendan is that the more success he has individually, the more he compliments his teammates. There's a culture we've built at Hartland, and Brendan has done an exceptional job putting his team before himself. When you look at his individual ability, the way Brendan scores big goals in big games is something every coach prays for in their lineup. He can be straight up lethal. When you combine that with his attitude and work ethic, you have yourself a really good hockey player. Brendan came to our program last season as a sophomore and like most, there was some maturing to do. Watching him take that big step this year not only as a hockey player. but as a human being, is what excites me most. As a coach, I like to focus on the game within the game and attributes like respect, humility, discipline, etc., are all things we look for in our players. Seeing a player like Brendan mature the way he has and continue to follow the process to become the best player, student, and person possible is really what it's all about.”

Performance Point: “Those are all KLAA games, and they’re rivalry games, and we needed them to make it to the (league) championship. We went on a little cold spurt there and didn’t win in three games, and these last three we’ve been on a winning streak against top, top teams in the state, and it’s awesome finally coming together as a team.”

Surrounded by standouts: “I’ve just been trying to keep my pregame rituals the same, keep my mindset the same, and I just think I’ve been getting lucky putting the puck in the net. I guess it’s not luck; playing with Josh Albring (6 goals/23 assists), who was (all-state) Dream Team last year; he’s a Mr. Hockey contender. And Jack Behnke (17 goals/9 assists), he’s just been killing it since last year with points and goals. And Joey Larson (8 goals/12 assists) too; playing with those three guys, it’s kinda hard, honestly, not to perform well. Because they’re so good. Playing with them makes everyone else play better. When they bring energy and make good plays, it starts building up throughout the team. I love playing with them.” 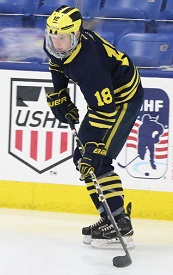 Ready for another run: “Our coach Rick Gadwa pretty much built this program from the ground up, with the help of our athletic office. We really didn’t have a very high-ranked team at all. Before (the goal) was just kinda winning a Regional championship, but the past couple of years, when we don’t win the state championship, it’s a letdown because we feel like we can do it. … We’ve just learned that we can’t be comfortable. Like last year, we only lost two games all regular season. Most of us thought we’d just waltz right in and win it. This year we know we can’t get comfortable. We’ve beaten these last three teams; there’s still work to be done.”

Looking up to Luke: “(2016 graduate) Luke Cowan … he put Hartland on the map his senior year. He was unbelievable to watch, one of the best players I’ve ever seen. He was a skill guy, he got a ton of points, but he also worked his butt off all the time in corners, he was a grinder, he rarely made mistakes and he was just a great role model to play after.”

Proud to wear blue & gold: “(Playing high school hockey) was the best decision I’ve ever made in my life. I have enjoyed hockey so much more in these last two years than I ever have. We get to skate every day. I’ve built great relationships with kids just seeing them every day after school. And then playing in front of students at your school, the big crowd, it’s awesome.”